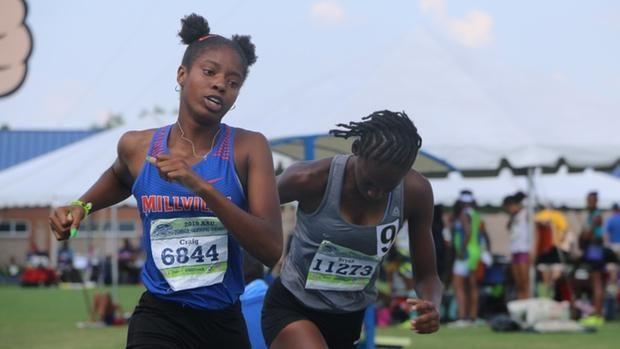 * Bryanna Craig is a prized-recruit for Louisiana Tech

The recent news of North Carolina native Terrell Robinson committing to Saint Augustine University has certainly caught the attention of many in the recruiting world.

However, Robinson isn't the only top-ranked name who is going to an unconventional NCAA landing spot.

Below, we highlighted three standout track and field talents whose collegiate signings placed them with unexpected universities.

There are few sprinters in the country who are better than Carmichael. The Virginia native, who is a senior at Hayfield Secondary School, has become one of the best short-sprints specialists in the country this spring.

In fact, Carmichael has even emerged as a competitive name in the high jump.

His high jump personal best of six feet, four inches sat at US No. 105.

Carmichael's resume makes him an all-around elite recruit. The extensive value that he holds in a variety of events would make him a highly-touted prospect at any of the southern universities or one of the top Virginia-based schools like Virginia Tech or the University of Virginia.

However, Norfolk State, an HBCU located in Norfolk, Virginia, turned out to be the surprise recipient of a recruit who boasts unreal firepower.

But make no mistake, Norfolk State isn't just any other school when it comes to the track and field side of things.

With Terrell Robinson choosing Saint Augustine and Carmichael taking his talents to Norfolk State, the amount of talent that is pouring into Historically Black Colleges and Universities not named North Carolina A&T seems promising. When you think of a school in the state of Louisiana that often land top-tier recruits, there's only one: LSU.

However, the Tigers were not the winners of Bryanna Craig's commitment, a senior at Ruston High School and a nationally recognized Louisiana talent. Craig is one of the most dynamic track and field talents in the country. She was ranked at US No. 1 in the pentathlon over this past indoor season.

However, Craig also earned a top 10 ranking in the high jump over the past winter and spring. During the indoor track season, she also recorded nationally-competitive marks in the long jump, 55m hurdles, 60mH and the 400m.

If you count the pentathlon as a different event group, Craig was nationally ranked in four different event areas (hurdles, long sprints, jumps, multis) this past winter.

But instead of taking her talents to Baton Rouge, Craig opted to sign with Louisiana Tech instead. While it may come as a surprise for Craig, whose versatility made her one of the most valuable scoring recruits in the Class of 2022, it makes a bit more sense when you realize that her father, Raffael Craig, is the jumps and multis coach for the Bulldogs.

Coach Craig joined Louisiana Tech in the summer of 2021 after a successful stint as a volunteer assistant coach for the powerhouse Texas Tech Red Raiders.

Regardless of the reason, Craig's move to LA Tech is a big one. Based on her current personal bests, she would have been the top pentathlete for the Bulldogs this past winter and, so far this spring, would easily be the team's top heptathlete based strictly off of score.

Of course, translating high school success to the collegiate stage is easier said than done.

But if anyone can do it, it's Bryanna Craig.

Quinn Worrell is a unique high school prospect. The Pennsylvania native and current senior at Saint Joe's Prep has suddenly evolved into a nationally-competitive miler almost out of nowhere. His mile PR prior to 2022 was 4:38.

Worrell doesn't necessarily get the attention that he probably should. But that's what happens when Gary Martin, CJ Singleton and Weber Long are among the Class of 2022 runners in the state.

And that's also why Lafayette College, a small private university located in Easton, Pennsylvania, may have secured the steal of the year.

Not only have Worrell's improvements been significant, but they have only happened recently, meaning that his ceiling is far from reached. Lafayette will happily introduce Worrell to their team next year, and he could be an immediate leader of the Leopards' distance roster.

After scoring just 13 points at the Patriot League Indoor Championships earlier this year, Lafayette is hoping that Worrell evolves into a contender who can battle with the men of Navy, Army, Boston University, Bucknell and Lehigh for conference points.