Next up is 2016 Loudoun Valley (VA) graduate Drew Hunter, arguably the first high school track and field megastar in the social media age. Before graduating high school, he broke indoor national records in the 1,500m (3:41.93) and mile (3:57.81), surpassing a former legend in Alan Webb, who once was coached by Hunter's own parents, Joan and Marc. Drew also broke the 3K national record mark in 7:59.33.

Perhaps more than big wins, though, Hunter formed a personal identity for gut-check performances and incredible kicks, none more noteworthy than his anchor leg in the DMR at the Penn Relays in 2016.

Eventually, Hunter, the Gatorade National Runner of the Year in cross country in 2015, turned pro directly out of high school and signed with adidas. He continued to run well in 2017 and in 2018, dropping a career-best 3:35.90 in the 1,500m at an event in London and then followed by qualifying for the World Championships in 2019 in the 5K before an injury would take away that opportunity.

Heading into the U.S. Olympic Trials, Hunter once again is experiencing pain, as an injury has kept him out of qualifying. But no doubt, Hunter will be back -- and his star will continue to rise. 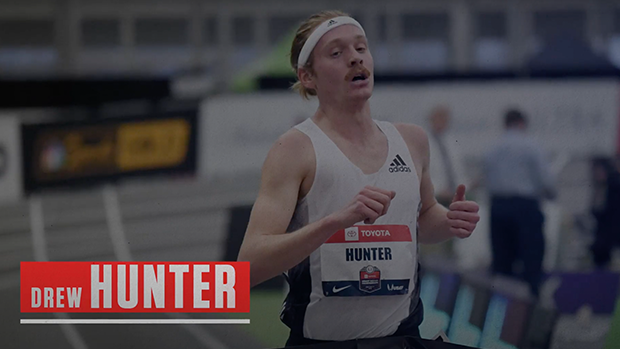