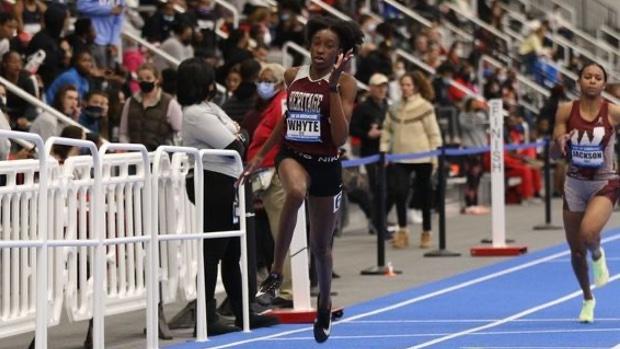 One of Virginia's top sprinters will move from the east to the west coast in the fall. Heritage's (VA) Madison Whyte signed with USC heading into the Thanksgiving weekend.

Whyte will join the talents of Nonah Waldron of Oak Park (MI) and Yougendy Mauricette of Sussex Technical (DE) who announced their commitments earlier this month.

Whyte showcased her strength in the state by grabbing two gold medals in the 55m and 300m at the state championships.

This year she competed in two national championships and medaled at both. First, at the New Balance Nationals Indoor, she clocked a 23.73 in New York to claim the bronze. A week later at the adidas Track Nationals, she earned the gold with a 23.78 in the 200m.

* Madison Whyte won the adidas Track Nationals title in the 200m with a 23.78

When the outdoor season was in full swing, Whyte didn't back off the gas once.

She earned three golds in the sprints and a bronze in the high jump with a 5-4 clearance at the VHSL Class 4 State Championships. She then took her talents to New Balance Nationals Outdoor where she won the title in the 200m with a lifetime best of 23.30.

Zyaire Nuriddin locks in with Tennessee

Myla Greene Pens With The University Of Tennessee