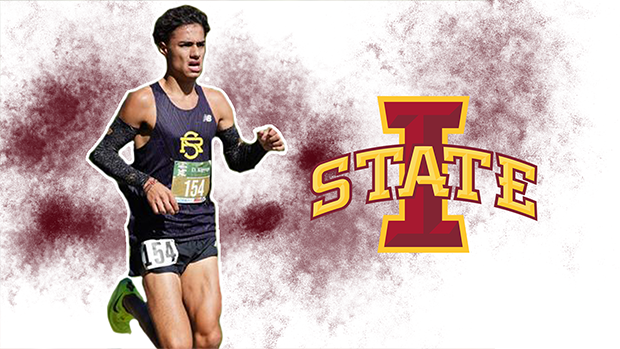 NLI SIGNING WEEK IS HERE -- On Thursday afternoon, Devan Kipyego sat at a table in the gymnasium at Saint Raphael Academy in Rhode Island and placed down the hats of the five colleges where he had taken official visits.

Kipyego, the No. 9 ranked boys cross country runner in the MileSplit50 and a four-flat minute miler, put a Villanova hat on his head, then placed it on the ground.

He did the same with Washington, Kentucky and Iowa State.

That left the Oregon hat as the lone one still on the table, prompting the crowd to cheer.

Presumably, the thinking went, Kipyego would sign with the Ducks.

But the 18-year-old had a trick up his sleeve. He then placed the Oregon hat on the ground and turned to his left, watching as his brother, Darius, a sophomore at Iowa State University, came into view.

A few seconds later, Kipyego made it official, announcing he would sign with Iowa State, where his brother is a star mid-distance runner.

He added: "It just really came down to those two (Iowa State and Oregon). I think Iowa State just fit me more. I just felt home at Iowa State."

Kipyego visited Iowa State on the first weekend of September and then made his four other official visits over the next several weeks, culminating with the Oregon trip.

On his flight home from Oregon on Oct. 23, Kipyego thought over his choices and decided he would sign with Iowa State. He called his brother and told him the news and then called Iowa State director of track and cross country Jeremy Sudbury, who has specialized in coaching mid-distance and distance runners throughout his career.

"I was like, 'Hey coach, I want to come to Iowa State and I want you to take me to that next level'," Kipyego said. "He was right with it. He wants me to go to the next level. We're really both hyped about it."

Still, Kipyego was relatively new to the sport. He played on the varsity soccer team as a freshman, scoring a team-high 17 goals, but after sustaining a serious injury, he quit soccer. Last year was the first time he committed himself full-time to running.

Kipyego gives much of the credit for his improvement and focus to Saint Raphael coach Chris Magill, an alum of the school and a former distance runner at Iona College in the early 1990s who continued running at a high level with the Boston Athletic Association into his 40s.

"He told me, 'You could be a great runner. You've just got to sacrifice soccer and you've got to put in the dedication,'" Kipyego said.

"I think he's one of the best coaches in the country. He knows what he's doing. I trust him. We're very communicative with each other. That helps me win races and get better."

This year, Kipyego is undefeated in cross country. His resume includes winning at the Ocean State Cross Country Invitational in a course-record 14:57 for the 5K; capturing the Manhattan College Invitational in 12:14.40 for the 2.5-mile course; and repeating last weekend as Rhode Island state champion.

Kipyego will run on Saturday in the New England Championships and then at the Team Northeast Regional on Nov. 26, with the hopes of qualifying for Team Nationals on Dec. 3 in Portland.

Kipyego said he has been in a group chat with several other top runners who have committed to run at nationals, including Leo and Lex Young and Aaron Sahlman of Newbury Park (CA), Connor Burns of Southern Boone County (MO) and Simeon Birnbaum of Rapid City Stevens (SD).

Kipyego has big goals for the indoor and outdoor track season, too. He is planning on running in some open meets as well as running the mile at the New Balance Nationals Indoor meet in March in Boston.

"I think he's one of the best coaches in the country. He knows what he's doing. I trust him. We're very communicative with each other. That helps me win races and get better."

Kipyego said Burns and Birnbaum, who have both committed to Oregon, plan on competing at the New Balance meet as well.

As for college, Kipyego expects to be a contributor to Iowa State's cross country team, which finished second in the NCAA meet last year and is ranked 27th in the latest coaches poll.

During track, he will run a variety of distances, including the 3,000m steeplechase, an event in which he hopes to achieve a qualifying time for the 2024 Olympics Trials. Kipyego won the 2,000m steeplechase at the New Balance Nationals Outdoor meet in June.

Iowa State has an assistant, Cale Wallace, who specializes in coaching the steeplechase.

During his freshman year, Darius underwent appendicitis surgery and had tendinitis, causing him to miss several weeks and limiting the time he had to train and run. But through it all, Sudbury and Wallace checked in on Darius and oversaw his recovery, which made an impression on Devan.

"That's the thing about Coach Sudbury and Wallace," Devan Kipyego said. "They were with (Darius) 24 hours a day."

He added: "I think that helped shine light on how far those coaches went for their athletes. I think it also shined light on the team. It wasn't the main reason (he chose Iowa State), but I kind of got the inside look on how what goes on with the team and how they are."