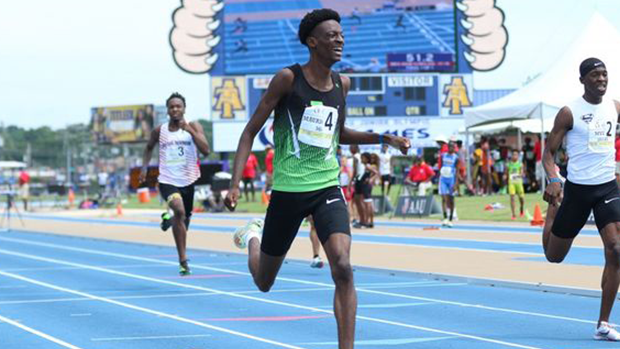 THE NLI SIGNING PERIOD IS HERE -- Yougendy Mauricette says he's not as tall as you think.

Admittedly, he says, he stands about 6 foot, 3 inches.

But that doesn't mean others don't seem him as larger than life.

"People think I'm taller than that," he said recently. "You never know. At least my doctor says I'm 6-3."

At least we can agree on one thing: Over the past year, his performances have been gigantic.

The Georgetown Sussex Technical High School senior ran past competitors and over hurdles unlike many others in 2022, leading to a year that saw him secure personal records at nearly every distance and bar he covered, whether it was indoors or outdoors, and ultimately it led to national outdoor titles in the 400mH, both at New Balance Nationals Outdoor and the AAU Junior Olympics.

Coincidentally, those massive moments opened doors for his future.

National Letter of Intent: By The Numbers

Big-time collegiate programs began chasing after Mauricette come June and July, and on Monday, just a few days after the opening of the National Letter of Intent period, he made his decision official, signing with the University of Southern California in a signing ceremony among family and friends.

But none were more important than his glowing 400mH mark, a time of 51.31 seconds which made him a blue-chip hurdle recruit in the eyes of Power Five conferences.

"Prior to the race, my coach and I said the goal for the whole season was to run a 51," Mauricette said of his performance at New Balance Nationals Outdoor. "We knew I could. I just needed to be in a race to do so."

And yet, it didn't exactly start smoothly. Mauricette, who leads with his right leg over the hurdles, wasn't even in the fast section of the 400mH Championship during NBNO.

It didn't matter. He grabbed the race by the horns and took it over anyway.

"I wanted to make a statement," he said. "I had to prove that I could do it without people around me. I went out there and ran my hardest. At first I wasn't expecting the time, but it happened."

Mauricette won that NBNO national title out of the second heat. Then, about a month later, he doubled down at the AAU Junior Olympic Games and won the 17-18yo division in 51.35 seconds.

He still thinks he can improve on the event. This year, he says, he's working on being able to change his hurdle leg in any given race, given his fitness and pace.

His success spurred interest from a variety of schools, but by September he narrowed it down to South Carolina, Baylor, Michigan State, Southern California and Georgia.

Baylor and South Carolina may have had the inside track early, as they were the first schools to begin talking to Mauricette, he said. But then Baylor and Georgia joined that conversation after NBNO. Southern California may have been last to that list.

He felt that, after he ran his 51 in June, he said, he earned USC's interest.

"To me, it was like a dream come true (to pick USC)," he said. "i remember seeing all the big names in the races before me, like Justin Braun, Malik Mixon. Seeing all of them commit there and looking up to Rai (Benjamin) and (Michael) Norman, it's such an opportunity to run there. It's such an honor to me."

"It definitely feels like my hard work is paying off," he added.

Trojans assistant coach for the sprints and hurdles, Joanna Hayes, primarily recruited Mauricette, and during his campus visit he also spoke with head coach Quincy Watts, he said.

With a year left to chase after records and more accomplishments, Mauricette says he has his eyes on breaking 50 seconds for the 400mH and qualifying for the Pan-American U20 Championships, where he can represent Team USA for the first time in his career.

"That's the goal me and my coach are hoping for this year."

And if he grows another inch or two? It'll only add to the legacy.