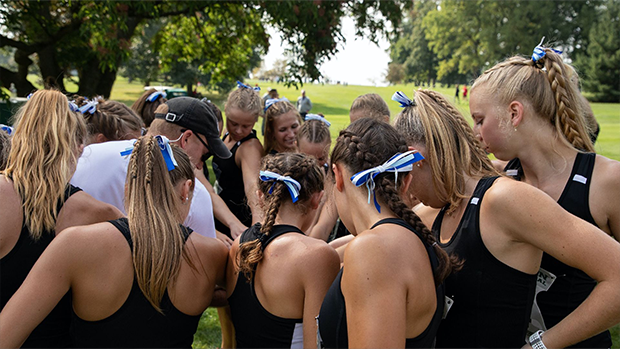 * The GVSU women's team readies for a meet this fall

In 1999, Jerry Baltes stood in front of the Grand Valley State University cross country team with a red construction hat that his assistant coach, Scott Cook, had found on the side of the road earlier that morning.

The brand new head coach told the team he knew it would take time, but together, he said, he wanted to build something.

"I think my greatest trait was that I was clueless," Baltes recalled.

At the time, GVSU's distance program was relatively unknown and had yet to win a Great Lakes Intercollegiate Athletics Conference (GLIAC) championship.

"I had no idea what it was going to take, but I tried to lay the foundation and expectations of what I wanted to accomplish," Baltes said. "At that point in time, it was simply to make the program better, to get to that next level and take it one day at a time."

Cut to the fall of 2022. GVSU's women's and men's cross-country teams are consistently ranked in the top five of the NCAA Division II, most recently at No. 2 and No. 3 in the USTFCCCA national polls, respectively.

GVSU's women's and men's teams have combined for eight national titles since Baltes first took over. Today, runners who join GVSU's program already know that they are getting into: They're being inducted into a tradition of excellence.

But Baltes, who led the Laker men to a national title in 2021, says he also makes sure the teams understand that the formula for success requires time and consistent effort.

His recruitment strategy centers around identifying runners who are prepared to work hard and pay attention to the little details of everyday training and recovery.

"Very few of our individuals are in a position to step in and be a huge contributor right away," he said. "We (have) certainly had some, but the biggest thing we need our freshmen and newcomers to buy into is the team culture and knowing that everything they do is for the good of the team," Baltes said. "It's a two, three, four-year process. We try to get people to see the big picture of the team and understand that it's going to take a great attitude and a lot of hard work."

Lilah Drafts-Johnson is a graduate of Oberlin College, where she was a double major and a 2018 NCAA Division IIII champion in the 400mH. She is currently a Master's student at the University of Maryland and has written for D3 Glory Days.

One of GVSU's true freshman this year is Abby Vanderkooi, a two-time third-place finisher at Foot Locker Nationals and a two-time Gatorade Player of the Year in cross country.

Although GVSU's legacy was undoubtedly a draw for Vanderkooi, she ultimately made a decision to pursue a degree in nursing first. Joining a successful XC program was just a bonus.

"The first message is you're here to be a student first," Baltes said. "Stay focused on why you're here, earning a degree. We talk a lot about finding purpose in what you're doing and why you're doing it. Very few of our athletes are going to be Olympians or professional athletes. So what is your reason for being in our program?

"Certainly, we want to win championships and run fast times and break records. But ultimately, each of us have has a purpose of what track and field does for us. Living out that passion and that purpose on a daily basis is very, very important in the ability to reach a program's and an individual's goal." One GVSU alum who has gone on to compete at the professional and Paralympic level is Chris Hammer (above), who graduated in 2008. He was a four-time All-American in the steeplechase for the Lakers.

Hammer, who was born with one hand as the result of a congenital condition, went on to become the 2021 World Triathlon Para Champion and placed fourth in the Paratriathlon at the Tokyo and Rio de Janeiro Paralympic Games.

"Besides meeting my wife and some of my best friends on the team, something I took out of GVSU's program for life was how how to be a professional," Hammer said. "And not like a professional athlete, but just a professional at whatever it is that you're doing. Coach Baltes and the program made me consider, what does it mean to be someone dedicated to becoming an expert at your craft? What kind of work does that require?"

Hammer pointed to the strong foundation Baltes and his staff laid years ago -- and its continual upkeep -- as the reason for the program's sustained success.

"Coach Baltes and the other GVSU coaches have created such a well-oiled machine where there is so much continuity from year-to-year," Hammer said. "In a way, it's now a tradition that is passed down from class to class. No class wants to be the one where GVSU falls from national prominence.

"But like any machine, it needs to be cared for and that comes in the form of hard work. The coaching staff and the athletes aren't resting on their laurels. Quite the opposite--they still have that blue collar, hard hat mentality that Coach Baltes came in with."

At Baltes' first team meeting 24 years ago, he told his burgeoning squads that he wanted to build something great in the future.

"I don't think the message has changed much," he said. "The expectation doesn't change."

Hopefully, the results don't either.

The GVSU Lakers will see if hard work pays off at the upcoming NCAA Midwest Regional Championship in Kenosha, Wisconsin on November 19.