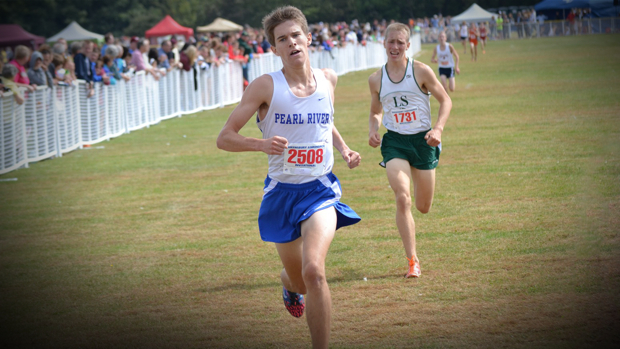 MileSplit - How is your fitness now that you are started in the 2013 season. What excites you most about the meets to come?

Brian - I feel stronger now than ever before. I'm excited to see just how fast I can push myself the rest of the season. I'm really looking forward to the great races that will happen when the championship season comes around.

MileSplit - After your win in a very fast time at Queensbury (#2 all-time on the course), what expectations do you have for the rest of your senior year in XC?

Brian - After Queensbury I knew that all my hard work was going to pay off this season. I'm expecting some really fast times these next couple of months.

Brian - In 9th grade my coach, who was also my teacher at the time, placed a form for spring track on my desk. After spring track I realized I liked racing and the group of guys on the team so I stuck with it and tried cross country in 10th grade.

Brian - My coach and my teammates. They are always there to root me on or give me some advice. Some of my older teammates from my freshman year still follow my races which means a lot.

Brian - My father has really influenced me the most. He follows all my races and makes it to all the meets that he can. He never hesitates to throw some last minute advice my way or pump me up on race day.

Brian - I like to push myself during workouts so that when it comes time to race I know that I'm ready. This also helps with the nerves. I try to be as calm as possible while still staying focused.

Brian - We all really work off of each other. Our coach always tells us to run for our teammates and not just ourselves which is a great motivator.

Brian - My favorite cross country performance has to be States my junior year. I ran really well and the course was awesome. There were people cheering everywhere which made the final straightaway unforgettable just because it was so loud!

Brian - I enjoy competing with anyone from New York. Everybody knows everybody which makes it fun to race against each other.

Brian - Probably states my sophomore year. Both the Pearl River boys and girls team qualified for states so the bus ride to VVS was a ton of fun. The seniors that year taught me all I know today.

Brian - My goals for this season are to win a state championship, both individually and as a team, to win Federations and to qualify for Nike Cross Nationals.

Brian - I am looking to run in college and continue to drop my times even more.

Brian - Following Mary Cain throughout the championship was really cool since she is in my grade and I got to see her go from a high school runner to a world class athlete.

Brian - I like a lot of Avicii or Passion Pit. Those kinds of songs pump me up especially because I'll most likely be playing them as loud as possible.

Brian - I'm definitely a twitter guy. I'm always refreshing my feed or thinking of something good to tweet.

What gear is your favorite while running…

Brian - For trainers i go with Brooks Ravenna 4's but for clothes and racing I like Nike.