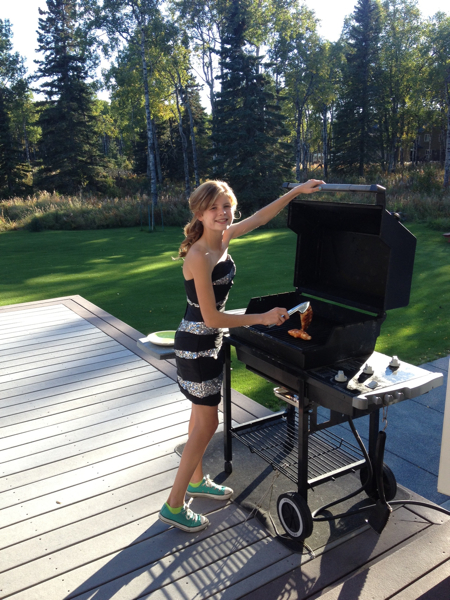 MileSplit - What was it like to win your 2nd straight title and take nearly a minute off of your PR on the course?

Allie - I was overjoyed to finally have a solid state race. I think in past years I let the pressure overwhelm me, but this year I was able to keep my stress in check and that showed huge benefits.

MileSplit - Traveling to Oregon and winning the George Fox Classic was a big race for you with a fast time.  was this meant to keep you fresh for the post-season and if so what are your plans for the rest of the XC season?

Allie - The George Fox Classic was mainly for me to practice running against close competition and also to run on a flat and fast course. I am not planning on racing any more this season; I'm still training, but I'm beginning to shift into gear for the basketball season. Maybe next year I'll participate in regionals, but this year I just wanted a taste of what it's like to run in the lower 48.

MileSplit - What is it like to train in Alaska?  Perks and challenges?

Allie - Alaska courses are extremely hilly which help me develops stronger leg muscles and mental toughness. They do make it harder to run fast times though. It's also harder to participate in the huge races in the lower 48. I didn't even know regions existed until last year!

MileSplit -  When & how did you get started in cross country?

Allie - My mom and dad are runners so running was normal in the family, but I didn't run much until fourth grade when my sister joined the middle school cross country team. I went to practice with her and trained with their team. During their meets I would run in the community race. At the borough meet, the last of the season, I ran in the community race against one of my present teammates, Jordan Theisen. I let him pace the entire race and hung right on his shoulder. Then in the last straight stretch I kicked past him, but during that sprint I was crying because that was the first time I'd ever felt that pain. That race resonates in my head as when I first began to understand running.  Also as some credit to Jordan, we still train together, but he always beats my times...I don't like it.

Allie - My parents because they have always supported me and helped me through stress. Also all the boys that I train with, Nate Mole, Quincy Fuller, Jordan Theisen, Jonah Theisen, Mac Lee, Travis Cooper, and Fox Michaud, because they push me during hard workouts and also keep me from pushing too hard on hard days. Some of my competitors too like Megan Edic, Audrey Michaelson, and Alex Mathis pushed me to improve by challenging me in the races.

Allie - The most influential person for me is my sister, Taylor. She is the hardest worker I know. This summer she worked two jobs while logging 45 mile weeks, and over the last two college seasons she has improved her 5k time by over a minute and her 6k time by over a minute and a half. Whenever I'm tired in the middle of a race or don't feel like going for a run, I think of her and how hard she has worked and is working. That never fails to inspire me. At both of my best races this season, Taylor was at the 3k, right when I was hitting the wall, and her cheering and really just her presence inspired me to maintain my pace and muscle through the rest of the race.

Besides constantly supplying me with inspiration for cross country, she also sets a great example for my in life. Often I get jealous of her because she is just so perfect: funny, beautiful, intelligent, kind, and extremely likable. I always try to mimic her work ethic and be as awesome as she is!

Allie - This summer I went to a two week long team basket ball camp during which we played about 50 games.  That was exhausting and humbling, but it was great cross training and our team grew a lot. I also hiked a lot in preparation for Mt. Marathon, but for the bulk of my summer I just tried to get a solid base by logging lots of miles. I also did some speed work and tempo, but not a lot.  During the season I log fewer miles, but do more high intensity workouts than during the summer.

MileSplit - What are the keys to your team's success and how you train to reach your goals?

Allie - Our cross country team is coached by my mom, and she takes a lot of time at the beginning of the season planning all our workouts so that've peak at the correct time. She integrates all different types of running like intervals, long runs, tempo runs, moderate and easy runs, pace work, and speed work to make sure we have a well rounded training plan.

Allie - Other than races during this season, my favorite race was my first big invitational my freshman year. It was the Skyview Invite. Skyview is just ten minutes away from my house so I know the trails really well, and going into the race no one knew about me. I started the race with my usual front-running strategy and the whole time I was wondering what people were thinking about this 'little freshman' who was leading the race. I ended up winning the race by almost a minute which was an awesome start to my first high school cross country season.

Allie - Audrey Michaelson comes to mind right away. She is not only an amazing runner, but also really sweet after and before the race. She also has an amazing kick which always pushed me at the end of my race. Also Alex Mathis because she is nice and extremely talented, but mainly because she reminds me of myself with how nervous she gets and how competitive she is.

Allie - Meeting all the amazing people and learning to handle stress an pressure.

Allie - I don't like to tell people my goals; I just like to keep them inside, but the Olympics are always in the back of my mind.

Allie - I didn't watch the world championships this year, so I don't have one.

Allie - Rap or music with a good beat. I really like Sail and Remember the Name.

Allie - For a race, grass, but for fun definitely the mud.

Allie - It depends on what mood I'm in.