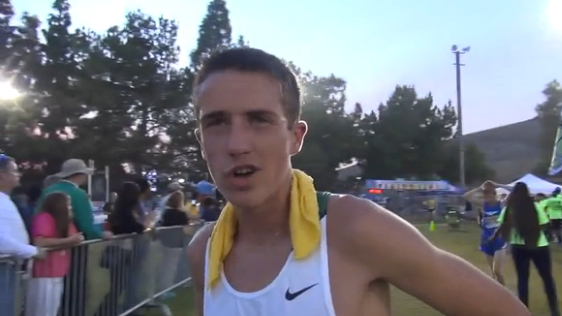 Austin - The Brea team and I are in mid-season form with no major injuries; however, we feel that we will be in better shape over the next 5 weeks for the state championships. Our coaches are preparing us to peak for the State meet.  We are looking forward to competing at Woodward Park for the State championships and possibly winning the D3 title.

MileSplit - You are a sophomore, so how do you view this year as you run against more experienced upperclassmen? You certainly seem to have the talent and focus to be a top national competitor.

Austin - For my sophomore year I have mainly been focusing on building strength and using the right strategy and tactics to give me the best results in each race. I’ve been pretty happy with most of my races this year and I can’t wait for the upcoming state and national competitions.

MileSplit - You have been battling in your area with other top runners, Sydney Gidabuday and Garrett Corcoran. You three have been trading barbs all season. What has this been like to race top notch competition almost every week?

Austin - I am very fortunate to have such a talented group of young men in my league to race with almost every week. It’s very unusual to have some of the top runners in the nation all in one league. I enjoy talking to them via Facebook a lot outside of running and we love to push each other every race. I have established good friendships with both of them over the last 2 years whether it is going on training runs or playing video games.

MileSplit - What type of courses play to your strengths, and where will this lead you to race after the CA state meet?

Austin - I enjoy racing on any course that is put in front of me. I tend to be more successful on courses like Mt. SAC and Woodward Park that have a few impacting hills where I could make significant moves on my competitors. Also I enjoy flat courses like Woodbridge because I could use my mile speed and stay with the lead racers.

Austin - In the summer of my 6th grade year my travel ball coach, Coach Al, invited me to do a track workout with his son who was currently on the local club track team. He said if I do track it would help me keep in shape for basketball during the off-season. After my first track workout I fell in love with the sport and I signed up for the team immediately after that practice. The coaches influenced me later to give cross country a try and see how I performed. In my first season, I qualified for USATF Cross Country Nationals and from that point on I focused on improving my fitness, training, and race experience with the Southern California Roadrunners coached by Dr. Mike Leong.

Austin - Much credit goes to my club running coach, Dr. Mike, because he has prepared me to be a top notch high school athlete as he was my coach for 3 years before high school. I would also like to thank my current coach, Jeremy Mattern, because he took me under his wing my freshman year and helped me adapt to high school running perfectly. His training philosophy and methods are helping me and my teammates keep up with some of the top teams and keeping us injury free.

Austin - My parents have influenced me the most in all aspects of my life.  They have taught me to strive to do my best in academics and athletics. My parents have taught me from a young age to work hard in everything I do and do it all for the glory of God. They have encouraged me my whole life to show a Christ-like example around everyone that I encounter.

Austin - One important key that helped me prepare for the 2013 cross country season was attending the Nike Elite Running Camp. I learned a lot on what it takes to be an elite runner. I knew coming into this year I had to be a lot more focused on my training since as a sophomore I was not as strong as the top competitors. I started a strength training workout over the summer to get me ready for the cross country season. This training was really beneficial because I now feel more relaxed towards the end of races and I can stay with the top runners in the state and challenge them at the end of races.

Austin - Going into this year’s summer training, my teammates and I had the same goal, which was going for that state title. The Brea Olinda coaches did a great job over the summer keeping all of us healthy and strong without overtraining. They had us running around 50 miles per week in the summer with some doubles twice a week. They also did a great job on providing us with many tempo workouts that help each and every one of my teammates to get used to race pace. By the beginning of our season every varsity runner had the mentality of “hurting for 15 minutes”.

Austin - My favorite performance in a cross country race was this last weekend at Mt. SAC because not only did I win my race, the Brea Olinda team won the D3 title and had the fastest team time of the meet which is now the 6th fastest in Mt. SAC history.  Setting a new Sophomore record was a great bonus.

Austin - I have had some great battles with Garrett and Sydney; however, I enjoy running against Blake Haney because he has the most world class experience and is one of the best high school runners in the nation. He has run against some of the best at the World Youth Championships and he has a lot of experience. That is my main goal in running is to learn better race tactics and be able to suffer more than the guys in my race. In order to be a successful as a runner you must be able to hurt more than your competitors and it’s all about how much you want to put your body through in order to win.

Austin - Running allows me to establish friendships with competitors from across the country; however, experiencing the camaraderie of a team like Brea Olinda.  Coach Jeremy Mattern and Coach Joe Wiley have taught us much over the last 2 years and our team  wouldn’t be where we are without them. Also, I have established great friendships with my teammates as we have common goals and are ready for great things in the weeks to come.  I’m glad I get to run with Brennon Koryta and Dimaggio Orozco for their final year in high school and hope they continue running at the D1 college level.

Austin - My long-term goal in running is to qualify for the Olympics and compete in the 1500m.

Austin - My favorite performance from the World Championships was Matt Centrowitz winning the Silver Medal in the 1500 meters.

Austin - I prefer to run on grass. I don’t have much experience running on mud.

Austin - I hang out on both sites but I’m usually more on Twitter. But occasionally I’ll check Facebook.

Austin - I enjoy both going out with friends and staying at home. Every once and awhile I need to stay at home and rest my body.

Austin - I run in Nike and Saucony gear everyday while running.