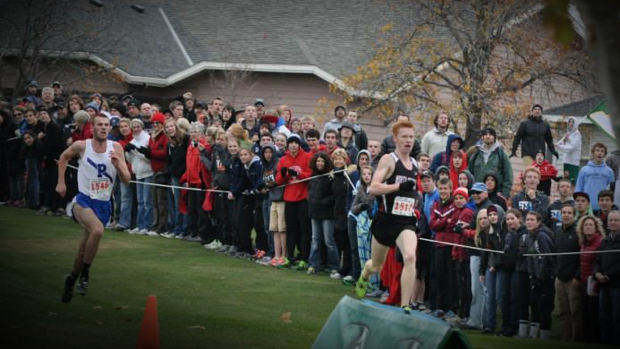 Tanner Anderson got the jump on Joe Hardy at the WA State Champs. (Photo by Jennifer Vandine)

MileSplit - How is your fitness now that you are in the middle of the 2013 season. What excites you the most about the rest of the season and what you want to accomplish?

Tanner - I feel that my fitness has suffered some over this last summer. As it stands now I feel more confident in my fitness knowing I still have time to gain as we go in to the championship phase of the season.

MileSplit - You led North Central to a 3rd place finish at NXN in the mud last year.  You have started off with some very strong performances so far this year as well.  Where are you in terms of preparation for the post-season?

Tanner - One of the things that has me excited about this season is watching our JV team hold on to all of their titles. I am also super excited for Nike Regionals in Boise this year and would like to beat Gig Harbor in this post season race.  As far as terms for post season I will continue training with my team and follow coaches instructions.

MileSplit - What strengths do you value in XC, and how will this help you prepare for NXN this year?

Tanner - I value the camaraderie I have with my team and the community that surrounds our program. This will help with NXN, I know I’m racing for much more than my personal goals. I'm racing for my team and people that support and love us.

Tanner - I was introduced to running by my friend Andrew Vandine in 4th grade.  His father was coaching for SYSA (Spokane Youth Sports Association) and he wanted me to join his team.  As it stands now I’d say Andrew, truly is the reason I started running. Plus, when I got into middle school coach Long from the North Central High school XC team came and talked to our XC team and invited Andrew and I to go to the Richland Invite to see what it was like to run in a big race. I was absolutely hooked after that meet.

Tanner - The people that most have influenced me in my running is my coaches and all they do for us. Another would be my parents as they support me with my running. As for as work outs go, I have looked up to Kai Wilmont my team mate as he has been able to be a workout king and racer.

Tanner - Training for this season started during the summer, I ran 50 miles a week and just kept in best shape as I could.

Tanner - The keys to our program is just hard work and doing it together as a team.  Our teams unity comes from putting in all the miles with each other and hanging out having team bonding nights and just having fun with everything we do.

Tanner - My favorite past performance for cross country would be my freshmen year when I was giving the chance to race varsity as a freshmen as our 8th man. I came in to that race hoping to just hold on and make varsity but as the race progressed I was starting to move up and toward the end of the race I was our 4th man. This would be my favorite race because it shows that with hard work and determination you can do anything.

Tanner - I just rock whatever’s on the radio while I’m working out.

Tanner - When it comes to Facebook or Twitter I have both and use both pretty much the same.

Tanner - I love hanging out with my family and friends and being out side, going out to lake or the river.

Tanner - I love all running gear, I can’t really say I like one more than the other.