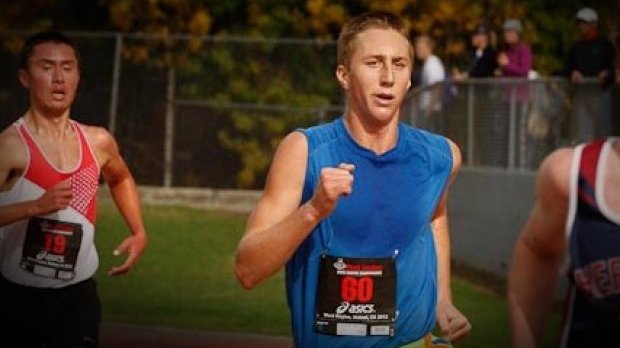 Garrett - I put in a lot of hard work over the summer and continued to work hard during the season and I’m feeling stronger than ever heading into championship season. I’m really excited about contending for a California State Championship next month and redeeming myself on the Woodward Park Course after a bad race last year.

MileSplit - Before today you were battling it out with Sydney and Austin on a weekly basis. What was it like to really unleash and pop a monster time today?

Garrett - It felt awesome to break 14:30 at Mt. SAC (#7 All-Time 14:29). I saw that Austin (Tamagno) had run 14:34 on Friday night and that got me really excited for Saturday. I was running for the win more than for time, but running under 14:30 became very realistic when the opening mile pace took us out in 4:37, so I pushed it over the hills and tried to break away. Unfortunately, Tal Braude caught me on the top of the last hill and beat me, but it still felt amazing to put my name in front of many of the greats on the all-time list for the Mt. SAC course.

MileSplit - What was it like out there on the Mt. SAC course today with the weather and the competition?

Garrett - I thought the weather was perfect during my race. It was mid-70’s and sunny; it was warm, but not warm enough to suck the energy out of you, and for me, those are ideal running conditions. As for the competition, it was a bit intimidating going against big names like Blake Haney, but I was determined to hold my own in the race.

MileSplit - Did you see yourself running one of the fastest times ever on the Mt. SAC course? How does that feel?

Garrett - Well I often make it my goal to run for course records in cross country, but a lot of the time, those goals seem a bit unrealistic to me. At Mt. SAC, with so many legends who have run there, it seemed weird to be trying to stick my name in there with them, especially knowing that the course had gotten the best of me almost every single time I’d run it in the past. It feels a bit surreal to be able to say I am the seventh fastest runner ever on the course, but it’s a great feeling.

Garrett - I started running in 9th grade when I told my dad I didn’t want to play baseball anymore; he made me go out for track instead since I had run a 5:09 mile in middle school. I loved how my hard work directly correlated to my performance, so I decided to run cross country as well when track season ended.

Garrett - My coach, Dave White, has probably been most influential because he’s really the only coach I’ve ever had, and his training is what’s gotten me to where I am today. He has a lot of experience in both coaching and running; he ran under 9:00 for two miles in high school, ran the Olympic Trials Marathon in 1972, and he’s been coaching at Villa Park High School for more than 40 years, so I respect what he has to say because he knows what he is talking about.

Garrett - My parents have had the most influence on my life so far. Without them, there probably wouldn’t be much success to speak about. When I was younger, I had a really competitive spirit, but I also had a very bad temper, which I would lose quite frequently whenever things didn’t go my way in any sports competition or even in the classroom. I still get teased by my friends to this day for my actions when we were in elementary school – I was that bad. But my parents always tried to teach me how to control my emotions, and even though it took a while, their lessons eventually stuck. I wouldn’t be as good of a runner today if my parents hadn’t taught me to always stay upbeat because I would constantly be getting down on myself for bad races.

Garrett - In my opinion, the key is never taking it too easy on your easy days. Obviously, you need to back off a little bit, but it’s important to me to never run over 6:30 average pace on any of my runs, and I always make it a point to my teammates to make our last mile of our distance runs the fastest one so we get used to running fast at the end of races. I stepped up my work this year by running more miles than in the past and running doubles at least twice a week in the summer and into the beginning of the school year, and that’s what I attribute my strength to this season.

Garrett - We reward our guys for having good races and showing improvement and we give a large incentive to be on our varsity team, so we always have guys competing for the top seven spots. It’s friendly competition though; I feel like although some guys on the team may have subtle differences, we all get along very well and act like a team during practice and at races. Our goal this year is to make it out of our league and into CIF (regionals) as a team for the first time in 4 years, and we’ve trained hard up to this point in order to do that.

Garrett - My favorite cross country race performance from the past was my first varsity race win when I was a sophomore. My team travels up to San Francisco every year to run the Lowell Invitational, which isn’t a very competitive meet, but there were a lot of schools there that year (2011) and I remember taking the lead from the gun and never giving it up. I only won the race by one second and I felt about ready to pass out when I crossed the finish line, but I later found out that the guy who I held off for the win (Chris Waschura) had run 4:08 for the 1600 during track season. My personal best at the time was 4:30. It felt really cool to be able to say I beat a guy with those credentials (especially because it was only my second ever cross country race) and it was a huge confidence booster moving forward.

Garrett - I really enjoy competing against Austin Tamagno and Sydney Gidabuday. I race them all the time since they’re in my league, and you’d figure I’d get tired of racing the same guys most of the time, but I think it gets more fun every time. We’ve gotten comfortable enough with each other to even talk a little bit and mess with each other during races – early on, before the action heats up and we get serious. To be honest, though, I love competing against just about anybody who’s willing to give it their all and has a positive attitude after races whether he won or lost, which is just about anybody who runs cross country. I like being able to make new friends at cross country races, so anybody who’s willing to talk to me or cool down with me after a race is a pretty cool guy in my book.

Garrett - The week I spent with my team up in the mountains this summer was fantastic. We really got close, and for the first time, I felt like we had become a team instead of just a bunch of guys running together. We had a lot of fun taking the boat out on the lake and hiking/rock climbing in the afternoons when we were done running for the day, and we really loved to play a card game called Phase 10 while we were up there. Things got pretty heated when we played, but in a good way. We made a lot of great memories while we were up there, and surprisingly, very few of those involved running.

Garrett - I haven’t really thought long-term too much yet, but I want to run at a high level on the collegiate scene after I’m done with high school, and I guess we’ll see where it goes from there!

Garrett - I’d say Mo Farah’s double, but I feel the need to be patriotic, so I’m going to go with Nick Symmonds’ second place in the 800. He ran a gutsy race. Even though he couldn’t hold on for the win, I still loved his strategy in that race. It was an exciting one to watch.

Garrett - I never listen to music when I’m running. I can’t stand the feeling that comes with sweat and earbuds competing for space in my ears.

Garrett - I don’t have much experience running in the mud, so definitely grass.

Garrett - Facebook – I try to limit the amount of time I stay on there, but it’s hard sometimes.

Garrett - I enjoy both, but I tend to stay home more often because going out often involves spending money, which I don’t have a whole lot of.

Garrett - Asics GT-2000’s. I’ve been running in those shoes ever since I began running.