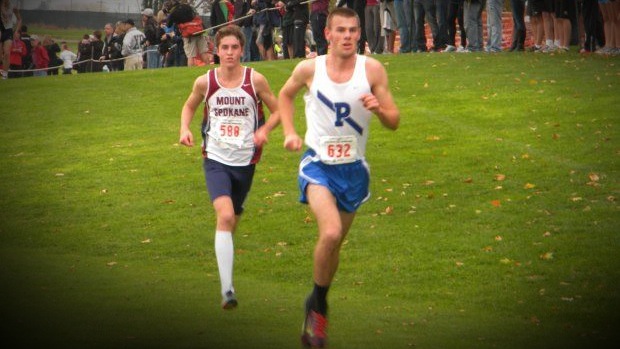 Joe - I'm really looking forward to getting in some fast races and pushing myself as hard as possible. Specifically Richland and state this year. My favorite races are when I get pushed to my potential and Kai Wilmot of North Central can always do that, so I'm looking forward to some good battles with him this year.

MileSplit - After competing at Nike last year and putting up fast times of 4:09 and 8:51 this spring, what are your plans for this season?

Joe - Train hard and run to my potential. I don't care to much about times or victories as long as I know I worked to the best of my abilities whatever those may be.

Joe - I knew like four people going into high school so my mom made me do cross country to make friends. She must have some crazy foresight or something because I did end up making some friends, and ended up being alright at the sport.

Joe - Specifically for cross country probably my coaches and teammates over these last three years. My coaches, Doctor John Robertson and Ben Sauvage taught me the nuances of running both as a sport but also as a science. My teammates these last several years have just been incredible. They taught me how to work hard in everything I do not just running. They exemplified, in my mind, how to balance high school social life, academics as well as a high degree of athletics. They also taught me the importance of humbleness in all aspects of what I do, that might have been the most important lesson for me.

Joe - My parents have guided me in an incredible way so far. I don't always appreciate all of what they've done for me but their lesson are seemingly infinite. My parents mean everything to me, I don't know what kind of person I'd be without them. They have taught me how to handle success and failure, they've taught me to be accountable for my actions and most importantly how to work hard.

Joe - I think the biggest keys is motivation and fun. Cross Country takes up a lot of time and especially in high school that can have a negative connotation just because it's high school, there are a lot of things you can do and some might seem a little more fun then xc training. However I think if an athlete can find enjoyment in running and really embrace the time commitment they will be successful. You have to have fun to do cross country, as simple as that.

Joe - For team we all try to be friends and really not take running to seriously. We work hard but we try not to translate that into getting down on other people and creating a bad atmosphere. Hard training is great, joking around is what makes hard training enjoyable and what makes a good athlete and a good team.

Joe - My favorite race was when I won J.V. metros my freshman year. I've had a lot of really memorable races and ones where I've been extremely happy about but I'm never going to forget this one because it was my first victory. It put running in perspective for me and made me want to pursue it as a sport.

Joe - Kai Wilmot from North Central Washington. My best races come against him, he pushes me to my limits every time I run against him and he's also a class act, really genuine guy all the time.

Joe - Cheering for my teammates and watching them progress every year is always memorable. They give a lot to me so I try to do my best and give a little back to them.

Joe - Hopefully I'll win state which will be very tough this year. Other then that everything is a little up in the air. I don't really know what to expect as far as national competitions, hopefully I'll improve that all I really want to do.

Joe - Run in college other then that no.

Joe - Didn't really watch it, but it was probably the 800m performance from Nick Symmonds, he's a wonderful runner.

Joe - Rage against the machine or gucci mane/waka flocka

Editor's Note: Best answer to this question so far!

Joe - Both, going out probably though