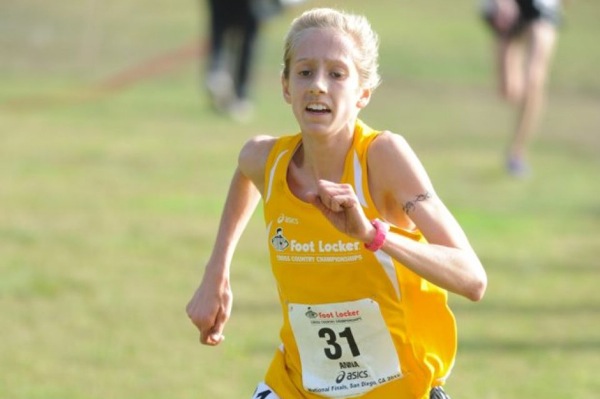 Anna running away from the pack last year in San Diego. (Photo by Don Rich)

Editor's Note: Interview questions were sent to Anna just prior to her injury being revealed.  Anna gratiously agreed to the interview after that announcement, and her answers couldn't have been better!

Anna - I'd like to start by saying that Foot Locker is not out of the question right now. It is possible that I will be able to run Midwest, but it is still totally up in the air, due to my injury.  Semi-state and State are not looking good, but hopefully I'll be healed enough to run Midwest.

MileSplit - After an amazing Foot Locker win as a Sophomore last year how do you regroup and focus for the upcoming season with the inevitable pressure to repeat?

Anna - I enjoy the challenge of trying to repeat the win, but I'm not focusing on Foot Locker Nationals because it's not my next race.  There is a lot to be done before that!

MileSplit - Have any other Foot Locker champs reached out to you in the past year to offer support and encouragement? If so, who and what did they say?

Anna - I still keep in touch with most of my Midwest teammates. We all follow each other on facebook and twitter and text each other after big wins. I've gotten messages from Molly Seidel after winning. She just wanted to congratulate me and talk to me at a Notre Dame race. Unfortunately I never got to see her at a race.  That's a goal of mine this season!

Anna - I ran cross country in 8th grade instead of playing volleyball because my P.E. teacher and track coach told me I had potential. I always did really well when we ran in gym class and did fitness testing, and in track, so I figured it was worth a try.

Anna - My coach is definitely the most influential person on my running career because he is knowledgeable about the sport and knows how to train me. I know he understands running, supports my decisions, and listens to me too. Also, my team is extremely supportive of me and they don't treat me like I'm some superstar. It's nice to work hard together and celebrate our successes.

Anna - My training has been very successful, but unfortunately injuries happen and there's no escaping them. I stay away from very high mileage to reduce injury risk and add cross training and a lot of core/strength training to supplement.

Anna - Both the boys and girls teams are very close and everyone knows everyone (one of the perks of having a total of 43 kids). We all practice together, have team dinners, and play games on Friday afternoons. Aside from that, we are just a big group of friends and we hang out together frequently outside of practice.

Anna - My favorite performance was the cross country state meet last year because I ran a really smart race. I started fast and worked my way up to the front but let other girls lead. Then, when the defending state champ, my top competitor, made her move I stuck with her. It came down to the last 600 meters when I out-kicked her for the win.

Anna - I don't have a favorite competitor, but I love anyone who will put out everything they have and really challenge me. Win or lose, if I feel like I ran my hardest, it was a good race.

Anna - My favorite non-running experience was the bus ride to and from state my freshman year because we took two mini buses, one for girls and one for boys, and we kept writing notes to each other and sticking them in the windows. Also, it is always really fun staying at hotels and going on our annual team camping trip to the dunes.

Anna - My goal is to be able to run Foot Locker Midwest!!!

Anna - My long term goal is to some day run in the Olympics.

Anna - I loved following Mary Cain this season because she is only a year older than me and she is such a sweet girl! Her performance in Moscow was very impressive and I'm sure she will return next year!

Anna - Some of my favorites to listen to while cross training are: Stronger by Kelly Clarkson, Hero by Skillet, and Taylor Swift's 22.

Anna - I think mud is a lot more fun but on a normal day I would prefer grass.

Anna - I love going out with friends but we often hang out at my house too.

Anna - I LOVE my Garmin Forerunner 10.