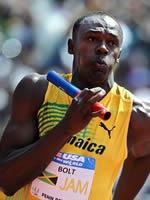 To see all performances, subscribe to start your free seven day trial

Feature Friday: Whittle Is Burning Up The Track This Se...
The junior at Hamilton North has burned five NJ No. 1 times, and has run the No. 6 time in state history in the 200m this winter....

Is Noah Lyles Going To Be The Next Usain Bolt?...
This isn't high school track anymore for Noah Lyles. After forgoing his collegiate career and going professional with Adidas he made the decision to make his next decade about two words: Olympic Gold.