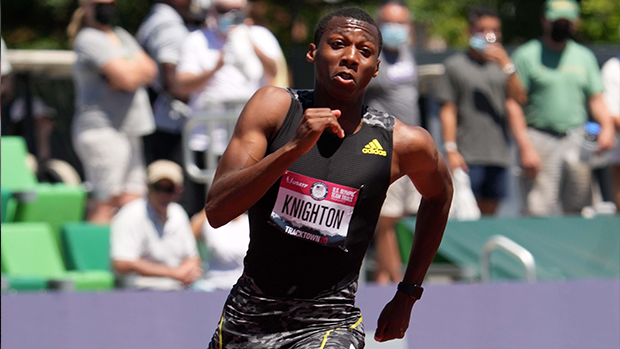 * Erriyon Knighton in the first round of the 200m on Friday

You don't need to hold that opinion in anymore. Erriyon Knighton might officially be the second-coming of Usain Bolt.

Knighton, the 17-year-old Tampa, Florida-native, broke the World U20 record on Saturday in the semifinals of the 200m at the U.S. Olympic Trials in Eugene, Oregon, running a wind-legal 19.88 (+1.1) to once again come through his heat in first -- the record is pending ratification.

On Friday, Knighton ran a wind-legal 20.04 seconds to surpass Noah Lyle's big mark from 2016, which at that point was a high school national record -- Knighton's time, however, would not be a high school mark after he turned pro in January.

He surely wasn't done, though.

In fact, he's got one more round left, and a possible bid to the Olympics on the line.

But on Saturday, Knighton was the fastest of any qualifier on the line in Eugene, hitting that impossibly fast time.

That once again lowered his World U18 best and now captures the World U20 record, pending ratification.

The mark on Saturday surpassed Usain Bolt's World U20 record from 2004, which was a time of 19.93 seconds. Knighton has only been running track and field for the past three seasons. He turned professional with adidas in January, just after hitting 20.30 on the clock at the AAU Junior Olympics in August.