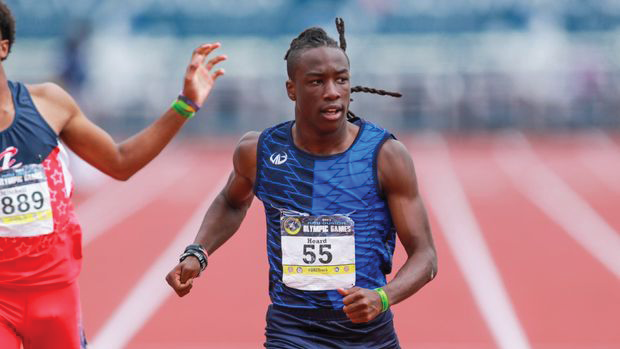 'This year, I was chasing them. Next year, they're gonna be chasing me.'

If you can't get through to the rising junior at Chippewa Valley High School in Michigan, you'll hear: "I'm either working out, eating, doing me, or living life."

You can't get much clearer than that.

On the track, Heard is coming off two MHSAA LP Division I state titles in the 100m and 200m. He's run wind-legal PRs of 10.53 and 21.06 and in August will compete at the AAU Junior Olympic Games in Greensboro, North Carolina.

He has a chance to secure his second and third national titles.

But as good as Heard, 16, has been to arrive at this moment, he will be racing against 17 and 18-year-olds. He's still 16 because of his December birthday.

"You have some guys there who are a little bit older - late birthdays," Heard said. "But nobody's going to feel sorry for you. If you work hard enough, you can just go grab it."

Growing up playing basketball and football, Heard found track when he was around 10 years old at 16ways Track Club, a program dedicated to encouraging young people to be the best they can through education, physical activity, and mentorship.

When he first got to 16ways, head coach Derrick Kelley remembers the 10-year-old showing up in jeans. He said he was looking to get in some "extra work."

Since that time, Kelley has seen Heard go from a kid racing his friends to the car, to a disciplined "old soul" intent on taking the next step.

"He went from being in the back for warm-up laps, to up front with older kids [and] high school kids," Kelley said. "Shamar said, 'This year, I was chasing them. Next year, they're gonna be chasing me.' And really the rest has been history from there."

While the AAU Junior Olympic Games in Greensboro will bring fierce competition, Kelley has nothing but confidence in the multiple-sport athlete.

"He has a different mentality," Kelley said of Heard. "He don't back down to too steep competition; it elevates him. He always wants to succeed and get better when he steps off the track. If it didn't happen, he wants to know why and get back into the lab and fix it so he can get back to that level."

But even if they don't get met, Kelley says he isn't worried. Heard is going to be a junior next year. The AAU Junior Olympic Games will be an opportunity to announce Heard to the high school track world with two full years of competition left.

"The goal would be to put something out there this [Junior Olympics] that everybody would take notice," Kelley said. "A lot of great runners, and we want to be right there with them on that timescale of having the same type of performance.

"And when college coaches in the world is looking at this kid, this young man is still just a junior; we can't wait to see what he's gonna do his senior year."

Heard has been competing at AAU since 2017. So he knows the format. He also might know that this is the same place where Olympian Erriyon Knighton ran his first big-time race. He, too, won his first national title as a freshman in Florida. So racing at the AAU Junior Olympic Games might also allow Heard the opportunity to break out as a top runner.

"We're gonna try to put something out there to grab attention and then have everybody really focusing on him next year," Kelley said. "It's a recruiting process for him from a track and field standpoint."

Not only is Heard a top competitor, but he is also a student of the sport, researching his opponents to study and understand their strengths and vulnerabilities.

"He has a different mentality," Kelley said of Heard. "He don't back down to too steep competition; it elevates him. He always wants to succeed and get better when he steps off the track. If it didn't happen, he wants to know why and get back into the lab and fix it so he can get back to that level."

"Our relationship grew from him initiating conversation," Kelley said. "We talk all the time about strategy, about life. He's such an old soul; he makes coaching fun."

In addition to preparing for the AAU Junior Olympic Games, Heard is recovering from a mild hamstring strain, which impacted the intensity of his training.

"I kind of had to take it slow due to a minor setback," Heard said. "So it was more so rebuilding and getting healthy and making sure I was strong enough before we take the next steps." As Heard's coach, Kelley must prioritize the status of the hamstring injury while also balancing the grind of summer football.

"We got to respect the body," Kelley said. "We want to keep him healthy -- that's the goal this year is to go into Junior Olympics healthy enough to run a quality time."

Heard should be in the mix in August, but the longer-term plan is to build for success over the next two years. With the chance to announce himself to his competitors at the AAU Junior Olympic Games, Kelley knows that Heard is on his way to becoming a household name.

"I think something special happening to him late in life," Kelley said. "This kid has a really, really bright future."