This one ...was an absolute banger.

Now, there are thrilling races: Gary Martin soloing an epic high school race; Colin Sahlman holding on for the third-fastest mile ever at the Prefontaine Classic; Connor Burns becoming the first junior since Jim Ryun to break four; and Rheinhardt Harrison lunging at the line for sub-4 in Florida.

Why Are We Seeing Sub-4 More Often? These Coaches Explain

And then there was this kid from South Dakota flying down the homestretch on Wednesday.

The junior from Rapid City Stevens (SD) High School -- wearing shades, no less! -- became the second high school junior this year, and the third all-time, to break four minutes in the mile, running 3:59.51 to win the boys championship section at Brooks PR at the University of Washington in Seattle.

He was in sixth with a lap to go. But somehow, after turning the corner -- as he passed James Donahue and Zane Bergen and Devan Kipyego -- he found another gear and loped into the finish line with absolute abandon.

We thought we had seen it all in 2022. But Wednesday proved again to expect the unexpected.

Consider this: Birnbaum was the last seed in the field. His 4:07.88, which came at the Arcadia Invitational on 2022 -- which was also a new South Dakota record -- was slowest among the 12 entrants on Wednesday.

Birnbaum became the 17th athlete all-time to break four minutes in the mile and the fifth this season, joining Sahlman, Martin, Connor Burns and Rheinhardt Harrison.

He became the first athlete from a South Dakota high school in history. 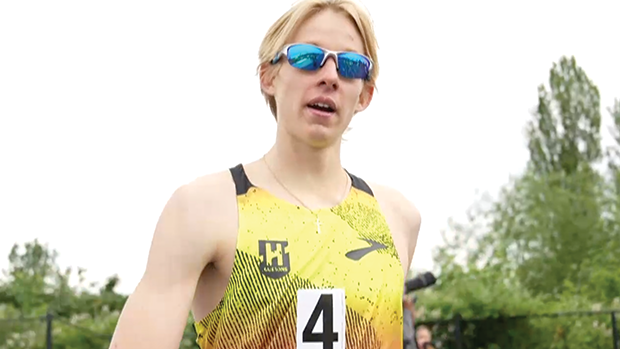 * Birnbaum talks about his race at Arcadia back in April

Colin Sahlman does it again, clocking 3:56 mile at Prefontaine Classic