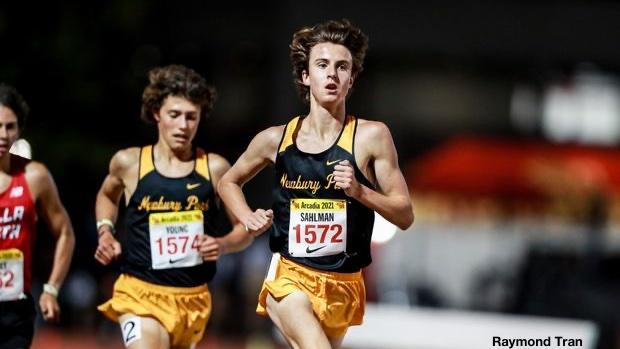 * Colin Sahlman after winning the 3,200m at the Arcadia Invitational

It's one thing to break four minutes in the mile. It's another thing to do it twice in one year as a high schooler.

That's exactly what Colin Sahlman did at the Prefontaine Classic in the Bowerman Mile in at Hayward Field.

Webb, Hunter, and Sahlman are the only three boys in history to achieve this feat during both the indoor and outdoor seasons in the same school year. The Newbury Park (CA) senior and NAU signee broke through the barrier for the first time during the indoor season with a 3:58.81 at the end of February at the Dr. Sander Columbia Challenge.

Jakob Ingebrigsten of Norway won the event with a world-leading time of 3:49.76. Oliver Hoare and Timothy Cheruiyot finished second and third in 3:50.65 and 3:50.77 respectively.