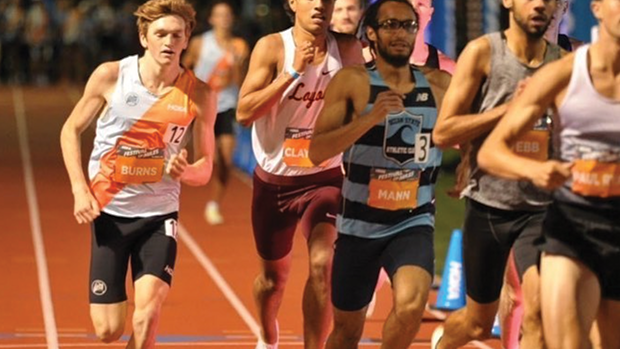 With June comes many conclusions inside the high school track and field space: the academic year, the outdoor track and field season and the finalization of the National Letter of Intent signing period.

However, June also acts as the transitional period to a new year of college signings. In this case, we're talking specifically about the Class of 2023.

Ready for some more predictions? We sure are.

College Predictions For Class of 2023 Athletes (Part One)

The Class of 2023 is loaded with elite hurdlers, but Green has still been able to stand out. The Texas native has become one of the best 300m hurdlers in the country, boasting a U.S. No. 3 mark of 40.82 this spring.

For perspective, Green is one of only three women to have broken the 41-second barrier in that event this year.

On paper, the Texas Longhorns would be an excellent and somewhat obvious fit for Green. The men's and women's programs have a legendary hurdles coach in Edrick Floréal and they have also emphasized the shorter sprint events as well.

If staying in-state is a priority, then Texas A&M would be another great choice, specifically because of their history in the longer hurdles races.

USC, LSU and Arkansas are all powerhouse programs with a promising history of success in the hurdles events. However, those options are almost too obvious for some recruits when you consider how often these teams land elite talents.

But what about Duke? The Blue Devils did, after all, just land a star-studded recruiting class this past year, which included an elite hurdles star in Falon Spearman (NC). The Blue Devils also had two top 50 women in the 100m hurdles this spring as well as a top five name in the 400m hurdles.

One of the latest members of the sub-four minute mile club ran his new 3:58 PR at the Hoka Festival of Miles against Gary Martin (PA) and a handful of top non-high school names.

But for Burns, this result didn't necessarily come out of nowhere. Coming into this race, the Missouri native held a 4:02 indoor mile PR (which was run on a 300m track) and had run 8:48 for 3,200m.

Connor is also the son of Marc Burns, the former cross country coach at Missouri. Is it possible that the Burns-Missouri connection could lead to Connor being a Tiger 14 months from now?

It's not totally out of the question, especially with Illinois distance star Drew Rogers signing with the SEC team earlier this year.

But unlike a few other standout distance stars from out west, Burns is also in close proximity to a handful of outstanding southwest and midwest schools.

Oklahoma State and Arkansas are two legitimate NCAA distance running powerhouses. While both programs have sometimes leaned on the transfer portal or overseas talent pools for recruiting, they have also proven to be very active (and successful) when landing elite domestic runners.

And when you look at their history of superstar distance talents, Burns would fit the mold of their rosters beautifully.

It's a very similar story for Iowa State, a team that would surely try to capitalize on Burns' mile prowess, especially after having Nehemia Too qualify for the NCAA Outdoor Championships in the 1500 meters this year.

Both Notre Dame and Indiana are two highly established midwest powerhouses that would also perfectly fit the mile/cross country mold of Burns' resume, though Notre Dame just saw the exit of cross country coach Sean Carlson. We know Carlson has proven to be a major recruiter: Would Tennessee come calling now for Burns, too?

The Moll twins have landed historic marks in the pole vault over the last few years, dominating the event and continuing their stunning year-to-year progression.

Amanda now has the outdoor national record after clearing 14 feet, 9.5 inches. Meanwhile, her sister Hana sits at US No. 3 all-time with an indoor clearance of 14-8.

Together, these two sisters hold an immense amount of firepower that most schools aren't able to recruit in a single year.

While there is no guarantee that Amanda and Hana will both attend the same school, based on their similar levels of pole vault success and where they sit geographically, we can at least offer a few good suggestions for both of these young women.

The University of Washington is an excellent choice for the Moll twins, especially if they want to stay in-state. The Huskies had a top 30 pole vault talent this past winter and were responsible for helping 2020 graduate Olivia Gruver become a candidate for The Bowerman award.

Then there is South Dakota, a long-held pole vault powerhouse that had two women listed in the top 10 of the national leaderboard this spring, along with two others who were in the top 71.

But if any team in the NCAA knows how to work with a pair of supremely talented twins who specialize in the pole vault, then it's almost certainly Arkansas.

After all, the Razorbacks were responsible for the development of the Weeks sisters, Alexis Jacobus and Victoria Hoggard, who were the top-two pole vaulters in the NCAA back in the winter of 2019.

Both women married while in college, which explains their different last names, but an interesting note is that they also sit directly behind the Moll sisters in MileSplit's all-time indoor archives.

Virginia Tech would also be another outstanding choice for the Moll sisters. The Hokies have a very strong reputation of success in the field events, specifically the pole vault.

In fact, current pole vault veteran Rachel Baxter currently sits at No. 3 on the NCAA leaderboard, while her teammate Julia Fixsen sits at No. 7.

And finally, we have Duke.

The somewhat recent introduction of a new coaching staff has clearly led to an emphasis on certain niche event areas. That can be evidenced in their recruitment of former high school record holder Paige Sommers as well as fellow Washington high school standout Allison Neiders.

With two familiar faces both at Duke, the Moll sisters may have every incentive to look at Durham, North Carolina as a potential college option.