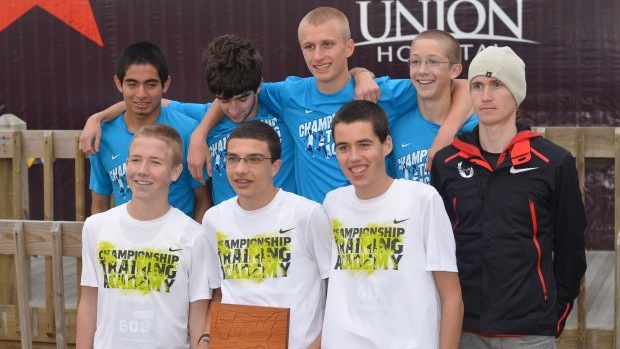 Kroy (York IL) could qualify for their 9th NXN race, yep that means all of 'em! (2011 File Photo by Paul Everett)

Analysis:  Usually, anything less than winning isn’t acceptable when you’re part of the Long Green Line.  But in 2011, when a young York squad extended its string of making every single NXN Final with its Midwest runner-up finish, yeah, there was plenty of enthusiasm.  Although York had won state by two points a week earlier, many thought the streak might be broken, but “Kroy” trailed only “Columbus Thorn” (Columbus North IN) to get back to Portland.

This year, US#12 York’s more mature squad dominated state, like many of its predecessors, and has to be considered the favorite to advance to its ninth NXN Finals.  With four returnees, led by 3A state 6th-place finisher Scott Milling, this squad has what it takes.

Several other Illinois clubs could give it a go.  Naperville South (Neuqua Valley) is a three-time qualifier to Portland, with the 2007 title, and though they were just seventh at state is always a threat.  But maybe a more likely challenger would be Chicago XC (Jones Prep, 2A state champ), an ascending program that is having a landmark year and had the fourth best overall average at state.  Class 3A runner-up O’Fallon (O’Fallon RC) has two very strong front-runners, but will have to overcome the gap to its pack, and 3rd-place finisher Lyons Township (LTRC) will have avoid a letdown after a state-meet stunner.

Likely to give York its biggest challenge, however, is AMDG (US#16 St. Xavier, D1 state champ), a rising program which won its first state title since 2003 (fourth overall) and is primed for its first-ever trip to Portland.  They’re unbeaten, with their biggest triumph coming at Culver over top Indiana and Michigan teams.  D1 runner-up Mason (Mason Running Club) probably has the next best chance from the state, but no Ohio boys team has made it since 2007 and 10th was the best finish in the region by a Buckeye State school in 2011.

Carmel has become a familiar qualifier on the girls’ side, but the Indiana power’s boys have never made it to Portland.  That could change this year.  Carmel was beaten in the semi-state meet, but roared back to claim the state title two weeks ago.  At state, their crew had a crazy 11-second spread between its first and sixth men.  From Indiana, also watch for state 2-3 finishers Fort Wayne Carroll and Valparaiso, and sixth-place Columbus North (Columbus Thorn) – which is defending NXN Midwest champ and two-time national qualifier which suffered big graduation losses, but still needs to be considered.

Missouri has not had a boys team qualifier since 2006 and has never sent one since it moved to the Midwest.  St. Louis XC Club (St. Louis Univ. HS, Class 4 state champ) would appear to have the best chance.  Michigan clubs are apparently free to enter this meet now, as long as they follow state association guidelines, but while the girls’ championship has two Michigan entries, the overpowering state champs from US#5 Highland-Milford did not enter a club.

Analysis: The battle for top individual honors should come down to a battle between three outstanding state champs: Jack Keelan, Sam Wharton, and Connor Sorrells.

Keelan didn’t even make his state meet in 2011, then took 15th here last year.  What a difference a year makes.  After his breakout 8:54 3,200 at Arcadia last spring, a lot was expected this fall from Keelan – and he’s delivered.  He lost only once – to 1A star Grant Nykaza, a 2011 Foot Locker Finalist – and delivered a 3A state title last week in 14:05, moving him into the top 10 all-time in Illinois state meet history.  He’s definitely ready to challenge for a national crown.

Wharton is the top returnee from last year’s NXN Midwest race, having notched fifth and then taking 21st in Portland.  Last spring, he ran 9:01 for 3,200 and has been unbeaten this fall, including topping a very good field at the Culver IN invitational and then winning D1 state in a very fast 15:09.

Sorrells had an insane breakout spring, going from a 9:39 PR before April and getting down to 9:01 by state meet.  This fall, he had some early losses, but heated up big time before the state series started and by the time the dust had cleared on this layout two weeks ago, he was clearly the best in the Hoosier state.

Wharton is the most experienced at this level, but Sorrells might have the biggest upside and, of course, has the most familiarity with Lavern Gibson.  Look for the Barr-Reeve senior to prevail.

Sorting out the next five or so and rounding out the individual qualifiers should be a dogfight.  Samuel Prakel was one place ahead of Keelan last year and was impressive in his state meet win, as well, clocking the second fastest overall time.  Quentin Shaffer is a fast-rising talent who improved from 48th at 3A state in 2011 to 2nd this time, after a spring where he ran 9:17 for 3,200.

Some to look for who aren’t on the above list: Belvidere North IL senior Garrett Lee was just fifth at 2A state, but had a fine regular season that included a 14:27 at the Richard Spring Invite on the state meet course and ran a 4:12.88 mile last spring; Warsaw IN senior Jacob Poyner was sixth at state, but an outstanding regular season included a second at Culver and he’s a 4:11.55 miler; the O’Fallon IL duo of junior Patrick Perrier and senior Alex Riba, who were 3-4 at state, just behind Shaffer, and Lee’s teammate Tyler Yunk. 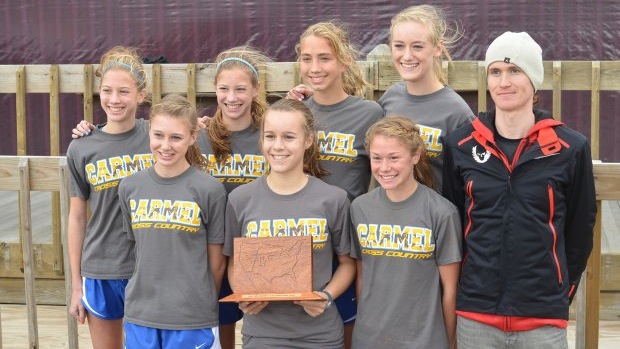 US#1 Carmel IN girls are the clear favorite again in 2012. (File Photo by Paul Everett)

Analysis:  As defending champs and still the #1-ranked team in the country, it’s no stretch to say: this is Carmel’s race to lose.  Four girls who were on the team that finished fifth in Portland are back and they know how to run as a tight group.  In fact, Kelcy Welch and Gina Genco hope to make NXN Finals for the third time as they were part of the Midwest runner-up squad in 2010.

Three other Indiana teams – the 2-3-4 finishers at state – have a shot behind them, with West Lafayette (Phoenix Fire), Columbus North (Columbus Thorn), and Franklin Central (Flashtown XC Club) – with North, led by Mackenzie Caldwell, having the most experience.

The battle for the other automatic qualifying spots, however, ought to be a fantastic fight between clubs from three other state champs (as well as perhaps a few others that didn’t top their state meet podium).  The Birmingham Striders (Seaholm HS) could be the first team ever to make it from the Wolverine State as that state’s association is reportedly allow clubs from its member schools to run now.  Seaholm upset defending champ and then-US#8 Grosse Pointe South at state.  GPS, by the way, will also be represented by a club, as well, but the Meier twins (Haley recovering from mono) and standout Ersula Farrow are not running, which will make it very tough for them to contend.

From Illinois, there’s 3A champ Naperville North (North Naperville Girls CC).  They were ninth here last year, but have ruled all fall in Illinois, winning state by 20 points.  They made it way back in 2005, as well.  The 2-3 teams at that 3A state meet – Lake Park and Glenbard West – are not bringing teams here, though GW’s state champ Madeline Perez (see below) is a top individual contender.  But don’t sleep on 3A fourth-place finisher New Trier (Wilmette RC).  They were a close second (45 to 49) behind Carmel here last year, then were fourth in the national at Portland, topping Carmel.  They have a killer top three, led by CourtneyAckerman.

Then from Ohio, overwhelming D1 state champ Mason will try and get to PDX for the first time.  They crushed the field last weekend by 100 points.  They were 7th two years ago here and 4th last year.  Other Buckeye State teams could perhaps challenge for the top four, but higher would be tough.  Mason hopes to be just the second Ohio program to make it since regional qualifying started (Magnificat did it in 2008-2009).

Analysis:  Two weeks ago, Ashley Erba was denied defending her Indiana state meet title by the killer finish of meteoric new star Anna Rohrer.  But with no Rohrer racing here Sunday, Erba will have another chance to try and cross the finish line first at Lavern Gibson.  Unbeaten during a great fall season – other than her two losses to Rohrer in three matchups – she was also the NBNO 5,000 champ last June.  She’s been ranked one of the top 5-10 runners in the country much of the fall.

At least two others from the Hoosier State should push in the top 10, Bobbie Burgess and Mackenzie Caldwell.  Caldwell ran as long as she could with Erba and Rohrer and, perhaps, would have beaten Burgess for third if she’d not pushed so much early.  But both were sub-18 on this course two weeks ago and will be tough.

But Erba’s biggest challenge to the victory will likely come from someone who’s rise to the top in Illinois this fall has been as much a rapid rocket ride as Rohrer’s.  Madeline Perez was 15th at state last fall and 39th at Foot Locker Midwest, then ran 4:59 and 10:46 for 1,600 and 3,200 in the spring.  She lost four times during the fall to other national-level state harriers like Kaylee Flanagan and Emma Fisher, but in the final few weeks of the regular season ascended to a new level, concluding with an eye-popping state record 16:02 win last week.

Several others from the Land of Lincoln could battle for a top 5 or 10 spot, but most likely is Courtney Ackerman, who ran a super 16:27 at state behind Perez and Fisher.

Two of the other top contenders for individual qualifying are a pair of freshmen who had stunning unbeaten seasons of their own this fall.  Taylor Werner started the season with a stunning victory over highly regarded Hannah Long (the eventual Class 4 champ, who is not here), and stayed unbeaten en route to her Class 3 crown.  Mary Kate Vaughn has not been topped all fall in Ohio, racking up more than half a dozen sub-18 marks over 5,000.  She then won by nearly 40 seconds at state.  Ohio’s top D1 finishers, were a few ticks faster, but are not here and one can only wonder how fast Vaughn would have run if pressed.

Michigan’s very best harriers – national top 10 stars like Erin Finn and Julia Bos – are staying home and prepping for Foot Locker.  But two other potential individual qualifiers to Portland could come from either Jamie Morrissey – who was beaten only by national stars Finn and Hannah Meier at D1 state – or Kirsten Olling, whose latest win on the road to recovery from iron deficiency was her third state title in D4.  The #1 girl for team title contender Birmingham Seaholm, senior Aubrey Wilberding, could also place very high individually.