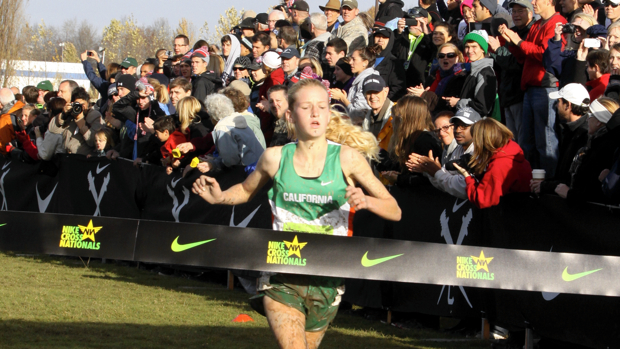 Queen of the mud Sarah Baxter!

The girls of Fayetteville-Manlius (N.Y.), known as Manlius XC here, came into Saturday’s Nike Cross Nationals girls’ championship race in Portland with six consecutive titles under their belt.  Yet, there were questions.  F-M had, at the Eastern States Championships in October, been beaten for the first time in any meet in six years (by Tatnall DE) – though F-M had been without its #1 Jillian Fanning.  Would they finally relinquish the NXN crown?  Who would beat them?

Simi Valley (Calif.) junior and defending individual champ Sarah Baxter came into this same event with one of the finest regular season records any female harrier has ever recorded – with course/meet records at both the Mt. SAC Invite and the CIF D1 state meet at Woodward Park.  Yet, there were questions.  NXN New York victor and 1,500 meter USR-holder Mary Cain, now coached by legendary Alberto Salazar, had been doing incredible workouts that pointed toward a possible upset.  Furthermore, super strong Glacier Peak (Snohomish, Wash.) senior Amy-Eloise Neale had destroyed competition all fall and seemed ideally suited for the impossibly muddy conditions at Portland Meadows in her fourth trip to the meet.  Might Baxter relinquish her crown?  Who could beat her?

How silly those questions seem now.

The F-M girls lose?  Are you kidding?  The Stotans not only won, they crushed the field by more than they’ve ever crushed it in the past.  With a game Fanning leading the way in 21st (scoring 6th), F-M scored four in the top 12, five in the top 19, and six in the top 27.  They scored 54 while, in effect, the rest of the contenders battled each other for second.  The next five clubs finished within 21 points: Southlake Carroll TX (Carroll XC) 198, Carmel IN (Carmel XC) 209, East Aurora NY (Aurora XC) 212), Saratoga Springs NY (Kinetic XC) 218, and Tatnall DE (Wilmington XC) 219.

It’d be nice if there was a secret formula, but at least on the level of what happened out there in Year Seven, there wasn’t.  “We just all got out ... we didn’t really have a race strategy,” said Fanning.  “It was just go out, lay it all out there ... We knew it was going to be tough, but we’ve run in mud before.”

And Baxter lose?  Not this time, not this season.  The Californian negotiated the mud just fine, thank you, and made her winning move even earlier this year than in 2011.  It was shortly before three kilometers and there was nothing Cain or anyone else could do.  Baxter led by as much as seven seconds and while Cain’s kick got her back within four ticks, 19:17-19:21, there was never any doubt.  The first girls’ two-time champ worked hard, but it looked like there was more in the tank.

“I looked for an opening to take the lead,” said Baxter.  “I felt like if I wanted to win, I had to get the lead earlier.”

Threepeat, anyone?  Baxter has one more year before she’ll move to the next level.  F-M has, well, at least as long as there’s an Aris coaching in Manlius. 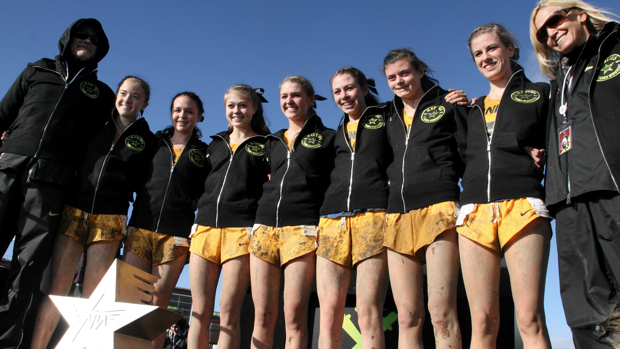 To be fair, continuing from what Fanning said above, the F-M girls did get sort of a little energy boost from a near mishap at the starting line.  “We had a rough start,” revealed the senior leader to MileSplit’s Kyle Braziel.  “Alana (Pearl) had just pointed where the gun was when it went off.  I was standing completely still; I wasn’t in race position.  But that kind of motivated us to get out even harder.  I know I was like, we really need to get out hard, now!”

In conditions where it was difficult to pass big groups of people later on, getting out hard was a good thing – especially when you’ve got a group that’s very unlikely to go out so hard that they die.  The shock of the unexpected start just pushed up the F-M girls a little higher than they might have been and served as an energy shot that turned what might have been a somewhat closer race into a rout.

As the race progressed, Fanning somehow found the middle ground between aggressively trying to be the championship contender she’d been last year and the pack leader she’d been this fall while recovering from injury.  As Coach Bill Aris pointed out, it wasn’t just the summer/early fall injury, but the bronchitis and more she contracted later, after she started racing again.  “She’s had a frustrating year,” he said.  “She just started to feel better this week.  Today was kind of redemption for her.”

“I was going to leave it all out there,” said Fanning.  “That’s the way my running is ... I went from the gun.  I don’t have much speed right now, but I can hold a hard pace.”

Otherwise, it was the power of the pack and various runners excelling beyond their normal spot.  “They really stepped up,” said Coach Aris.  “Mary Barger stayed with Jillian and was our second girl (22nd, scoring 7th in 20:13).  And Jenna Farrell moved up and was our fifth girl (scoring 19th, 20:49).  They just had to stick together and challenge each other.”

“Every day in practice, we just push each other as hard as we can,” said F-M senior Katie Brislin (scored 10th, 20:22).  “And we just try and do that in races.  All of us just look for each other and push each other.”

The fact that the rest of the field was far behind F-M didn’t mean there wasn’t great joy in podium showings for Southlake Carroll and Carmel.  Carroll – which has made every NXN Final but one – had placed third twice, in 2005 and 2006.  After three back-of-the-pack years here, they were back up to seventh last year.  But second?  Merely their best finish ever.

“The key was getting out there,” said Coach Justin Leonard.  “We just had to get out fast.  The scoring showed us second at the first split, so we did just that.”

Leonard also said that Shelby Chapin, who has been as high as second girl just twice this season, “had the race of her life.”  Scoring 11th in 20:28, she got the team off to a great start and Courtney Kriegshauser added to that, scoring 21st (20:53).  Carroll was also strong in the next two spots and that was enough to hold off Carmel IN by 11 points.

Similarly, Carmel had its best finish ever in third, scoring 209.  The club’s strength is in a very small 1-5 spread and they did it again, with a 35-second gap that was even better than F-M.  Carmel’s weakness is not having a high front-runner, but with their first three scoring between 31st and 39th in Gina Genco, Kelsey Harris and Kelcy Welch, it was enough.

“These girls usually refuse to run from the front,” said Assistant Coach Matt Wire.  “It was kind of hard for them to embrace what they had to do today.  But they got out in great position.”

After Carmel’s finish, the best from the Empire State reminded fans why they have such a great reputation here.  East Aurora stunned everyone with its fourth-place finish – thought to be the highest-ever by an at-large team.  Then Saratoga Springs, with their eighth trip to NXN and three straight runner-up finishes coming in, made it three New York teams in the top five with their fifth-place finish.  Taylor Driscoll, Olivia Morrow and Keelin Hollowood got ‘Toga off to a great start, scoring 3-16-17, and they held off 2011 third-place finisher Tatnall DE by a single point. 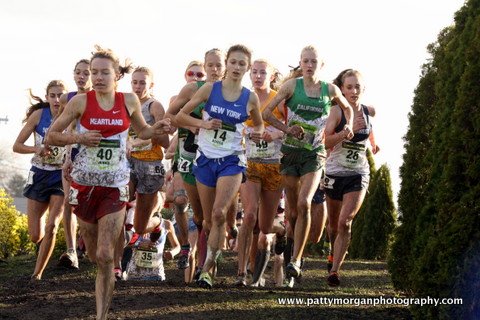 Baxter sat in the pack early before unleashing her monster move at 3k.

Go too soon, and you risk dying in the soul-sucking mud.  Wait too long and you risk getting dusted by the best prep girls miler in history – and from New York, yet, a state which seems to have some kind of magic here in Portland.

What’s a California girl to do?

Well, as the special talent that is Sarah Baxter has progressed, she’s become pretty savvy, pretty intuitive when it comes to racing strategy.  As Coach Roger Evans said last week, “She is more familiar with courses, pacing, trusting her training, and confident in achieving her goals.  These attributes were present in Sarah even as a freshman, but as the years have gone on they have become much more pronounced.”

So just before 3,000 meters, the time was right for the Simi Valley senior, who didn’t have to worry a whole lot about that timing while rolling to an unbeaten campaign in the Golden State. “I felt like Mary is a really good kicker,” she said.  “And I don’t like leaving (my move) to the end.”

Mary Cain, who’d been in the lead pack with Baxter, didn’t exactly let her go; her response was moving away from the pack, but not quite going with the eventual winner.  “(Sarah) started pulling away on the second loop,” she said.  “The last bit (of the course), I really tried to close, but I let the gap get too big ... As I tried to kick, it was like, Oh my God, the mud!”

Cain’s new coach, Alberto Salazar, called it a great performance, but “Sarah’s a little better right now in cross-country.  Mary let a gap occur ... she closed it up once, then again at the end, but it wasn’t enough.  She has to learn to stick with her when someone makes a move like that.”

After those two, neighboring state Washington made a big splash with finishers in third, fourth, and eighth.  But the order was a little different than was expected.  Unbeaten Glacier Peak senior Amy-Eloise Neale was the one in eighth (19:45), while North Central senior Katie Knight – beaten soundly by Neale three times this fall in their great career rivalry – had her best race of the year to repeat her third-place stick from 2011 (19:32).  Both girls completed outstanding four-year runs at NXN.  Meanwhile, Camas super soph Alexa Efraimson, a 4:42 miler last spring, blazed home in fourth (19:34); she’s halfway to a fine four-year run herself.

For Knight, this meet holds a special place in her heart.  “It’s my favorite race,” she admitted.  “It’s not about time here, it’s about guts.”

Pre would have loved it.

Knight, the daughter of boys coach Jon Knight, whose team was an outstanding third as well, talked about recovering from having mono this past spring, plus a summer surgical procedure that was not running-related.  “It’s been hard, a long process, but it’s rewarding when you keep working at it and have a race like this.”

Several others managed to get under 20:00 in the swamp.  Texas A&M Consolidated senior Karis Jochen, the NXN South champ and 31st here last year, moved up to fifth in 19:34.  Next was Courtney Ackerman (19:42), the New Trier IL senior who seems to be able make her way into the middle of the top 10 no matter how tough the competition is; she was fifth each of the past two races at NXN Midwest and Foot Locker Midwest.

Niwot CO junior Elise Cranny, the NXN SW champ, was seventh in 19:43, followed by Neale and Driscoll.  High Point NJ senior Sarah DiSanza, third at NXN NE, rounded out the top 10 in 19:48 and South Eugene OR soph Sara Tsai got one for the host state in 11th with 19:52 – giving the Northwest four in the top 11.

Among other top contenders, NXN Heartland champ Maria Hauger of Shakopee MN was 14th, California D1 runner-up Hagen Reedy of Buchanan (7th in 2011) was 20th, and NXN Southeast champ Wesley Frazier of Raleigh NC was 68th in her first NXN.

You couldn’t blame Frazier if, like Cain, she was eager for distance running action to return to the oval.  Said the Bronxville soph in a light moment on the podium, “I can’t wait until track!”

Can’t wait, indeed, but there’s time now for Baxter, F-M and all of Saturday’s other standouts to enjoy what they did in the mud.