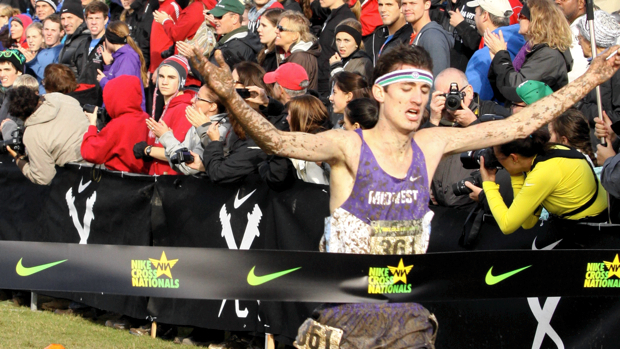 The Nike Cross Nationals finally crowned its first two-time boys’ national champion Saturday.  But it wasn’t those 2011 titlists that had ruled in record fashion all fall long – from North Carolina to New York – and had been favored, despite nearly stumbling last weekend in their regional.

The body language and the cheers of the athletes and coaches told the story as the results were revealed and awards bestowed in the aftermath of arguably the muddiest, swampiest NXN Finals ever (though the morning was partly sunny and mild).  It was the slumped shoulders, long faces, and thousand-yard stares coming from the Christian Brothers Academy NJ (Lincroft XC) tent as they realized not only did they not win, but didn’t even make the podium.  It was the raucous celebrating of the 2008 champs North Central WA (North Spokane XC) and American Fork UT (American Fork XC) as they realized they DID make the podium (the Cavemen for the first time).

And finally, it was the deafening roar from the Arcadia camp, as the California D1 state champs learned they had won their second championship in three years – not to mention the roar of their ecstatic mentor.  Coach Jim O’Brien brought a live squirrel good-luck mascot on the awards stand as he touted his squad, then 20 minutes later executed a promised body slide/dive – three of them, in fact – into the monster pool of muddy water just beyond the finish line.

Arcadia’s triumph came on the 19th birthday of the feisty leader from the 2010 champs.  On his Facebook page, an overjoyed Ammar Moussa – now a U. of Colorado harrier and whose little brother Mahmoud was the Apaches’ third man Saturday – posted (in all CAPS), “WHAT AN AWESOME BIRTHDAY PRESENT ... HANDS DOWN, COACH O'BRIEN IS THE BEST COACH IN THE COUNTRY. I'LL FIGHT YOU IF YOU DISAGREE.”

Arcadia’s total, led by stunning runner-up junior Estevan De La Rosa: 108 points, just 14 up on American Fork’s 122.  North Central was third with 146 – its highest finish besides that 2008 title – and CBA settled for fourth with 167.

Now, if part of the team race story was of a favorite being toppled, there were favorites figuratively strewn everywhere along the muddy Meadows layout among the top individuals.  Finishing outside of the top ten were esteemed champions like Nick Ryan (New York), Jake Leingang (Heartland), Jacob Burcham (Southeast), Bernie Montoya (Southwest) and Juan Gonzalez (California).

Instead, it was a day for runner-ups.  As in NXN Midwest runner-up Sam Wharton, the Tippecanoe (Tipp City, Ohio) senior who not only was second in Terre Haute, but also at Foot Locker Midwest last week.  Saturday, however, he was still alive and kicking while other favorites were dying and he accelerated the last kilometer to cross the finish line first in 17:06.  “It was good to get a win this time,” he said on the podium, adding with a chuckle, “I set a record: the slowest winner ever!”

The next two finishers had also been bridesmaids coming in: Arcadia’s De La Rosa in second (17:09) was the California D1 state runner up to the abovementioned Gonzalez, and Cleveland (N.M.) senior Luis Martinez in third (17:17) finished behind Montoya at NXN SW.

It was Portland Meadows Survivor out there – and Arcadia and Wharton were the strongest, smartest ... and best mudders.

Arcadia warming up prior to the race. (Photo by Patty Morgan)

Coach O’Brien wasn’t worried about the mud.  “We’ve never seen conditions like this,” he said.  “But we’re a strength-based team.  The miles we put in, especially during the summer, are the foundation.  And the way we train on hills, that gave us the strength we needed here.”

De La Rosa was strong, with that runner-up finish giving Arcadia a single point to start the scoring.  The junior, a man of few words, let his feet do the talking as he navigated into the top three by halfway and stayed there.  A precocious talent, De La Rosa had been up and down a bit, but showed his potential by winning Stanford in September.  “He ran the way we told him,” said O’Brien.  “He stayed wide where he needed to and stayed out of trouble.”

And #2 man Mitchell Pratt was strong – strong enough that he could start off well back in the first half of the race and pick other harriers off during the second half.  “We know Mitchell likes to run from behind,” said O’Brien.  “He pulled it off.  And the other boys gave them support like they always do.”

As mentioned before, Arcadia had some ups and downs early during an ambitious schedule, including a loss to North Central at Firman.  “We don’t always have good races early in the season,” said Pratt.  “But we last to the end.”

American Fork almost matched Arcadia for low sticks early, scoring second and eighth with senior Brayden McLelland (17:25) and junior Connor McMillan (17:42).  All five of its scorers tallied 48th or better, topping all squads, and we’re scored as the leaders at the final three splits.  But they lost a few points at the top and in the middle in their bid to win.

But Coach Timo Mostert’s crew was hardly disappointed.  “We’d been ranked first the past three years, but hadn’t run as well here,” said McLelland.  “We wanted to come back this year and get on the podium.  This was the first time we’ve had everyone healthy in Portland.  We wanted to show everyone that we could do it.” 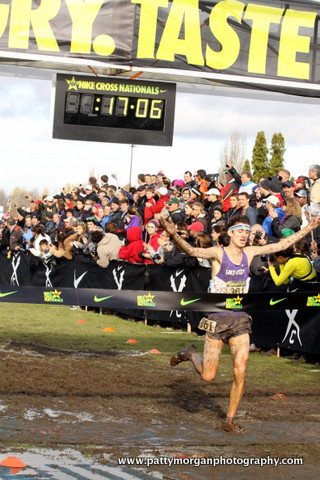 Sam Wharton gets through the muck first. (Photo by Patty Morgan)

But by two miles, all were done – for various reasons – as far as contending for the win.  In fact, so many were struggling to slog through the Portland Meadows swampland that Wayzata (Minn.) soph Connor Olson, the #5 individual qualifier out of the Heartland, had cruised into the lead and no one was going with him.  Olson is good, one of the best youngsters veteran mentor Bill Miles has ever coached in the Minneapolis exurb, but no one was picking him to lead, let alone win.

There were, however, a few upperclassmen stars in contention and one of them was US#10 Sam Wharton.  Three weeks earlier, the Tippecanoe senior had taken the lead against a similarly befuddled field at NXN MW, then got outkicked up the long finishing hill in Terre Haute.  But last weekend at Foot Locker Midwest, he ran more assured and even though he was outkicked again by Leingang, he looked every bit like a first-team All-American.

Now Saturday, as the final half mile drew forth, he and Arcadia’s De La Rosa were reeling in Olson and Wharton was faced with another choice.  “Coming in, I just wanted to place as high as I could,” he said.  “I was surprised the leaders weren’t coming up on us.  I hit 4k and I thought of NXN Midwest and it was like, Aw, heck, I’m going to do it again.”

From that point, he “just ran.”  It wasn’t a spectacular kick, but it was faster than anyone else near him could go.  Others would kick hard down the line, but they hadn’t stayed up high enough in the first place.  “I just dug deeper,” he said.

While US#23 De La Rosa was giving team champion Arcadia a huge boost with his runner-up finish, Cleveland’s US#20 Martinez was just trying to survive out there – but doing it better than almost anyone else.  The 2011 NXN SW had been 30th last year after his regional title, but this time – despite losing the SW race to Montoya – he produced one of the day’s most stellar efforts.

“It was really hard ... the only part where I felt like I could move was the backstretch,” the New Mexico 5A champ said.  “In these (tougher) parts, I just said I have to stay here (hold my place) and on the back I thought I could move up a bit.”

Martinez was followed by two more outstanding champions who were up there pretty much the whole race.  US#17 NXN SW and Washington 3A titlist Joe Hardy, a junior from Seattle Prep who stunned with killer track times last spring, took fourth in 17:19.  Behind him, US#19 Hebron (Lewiston, Texas) senior Robert Domanic, who won NXN South after claiming the Texas 5A title, rounded out the top five in 17:22.

Regarding some of the favorites who struggled:

For those six mentioned above, it was a race to forget, even if it was a weekend to remember.  But for Wharton and the other podium individuals and teams, a muddy morning in Portland will always be cherished.