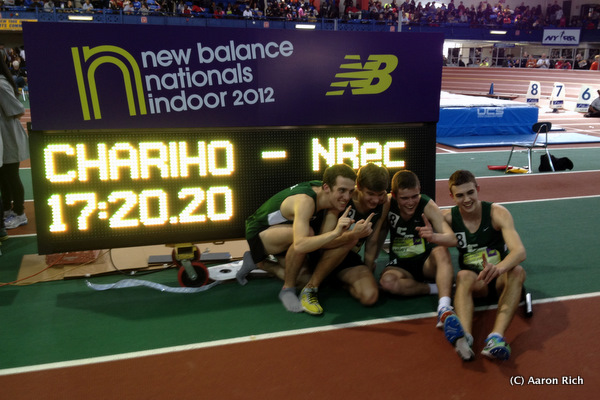 All morning, the buzz at the Armory around the boys 4 x mile was focused on two powerhouse programs that have dominated distance running in recent years. It was a two-horse race, the chatter went, and whichever favorite emerged – Shaker High School or New Jersey's Christian Brothers Academy – would also own a new national record.

Rhode Island's Chariho High School dealt that forecast a bitter upset on Saturday afternoon with a come-from-behind victory over runner-up Shaker and fourth place CBA, which fell out of contention from the gun. The prognosticators were right in one area though: Chariho's finishing time of 17:20.20 set a new national record.

The race came down to the final leg, when Shaker anchor Christian Delago took the baton with a three-second cushion on Chariho's star miler, Mike Marsella. Marsella, who's run 4:10 in the distance, passed Delago with 600 meters to go and surged ahead. Delago has run 1:51 in the 800 meters, but could not summon a kick strong enough to reclaim the lead. Shaker's time. 17:21.56, also broke the national mark.

"We knew they were great teams and we just wanted to be in it on the last leg and give Mike a chance," said Chariho's distance coach, Bill Haberek.

"We knew we had the talent all along to do this," Marsella said after the race.

Part of the reason Chariho flew under the radar coming into the national championships, besides its Rhode Island origins, a state better known for its size than its propensity to produce national-caliber distance runners, was that Marsella's teammates have barely run the mile this season. Third leg Jake Kilcoyne mostly focused on the 3000 meters (PR 8:48) this season, while the first two legs, Daniel Kilcoyne (Jake's older brother) and Bryce Kelley, respectively, have focused on middle distances.

Although Chariho's win is considered an upset, it's not first success for the Chargers. The same foursome year broke the New England Championship 3200 meter relay record last week, running 7:51.22. Chariho was also the runner-up at the 2011 Rhode Island state cross country meet.

"We refer to these guy as the four horsemen from Chariho," said Haberek, who gave them a new uniform before today's race and issued a challenge.  "I told them to 'christen the uniforms. It's the last time you'll run indoors together'," Haberek said. "They christened the uniforms real well."

With their win, Chariho is the latest distance standout to emerge from Rhode Island in recent years after decades of relative obscurity. In 2009, Westerly's Andrew Springer won the national indoor championship in the mile and his 4:02.58 was the fastest time in the country that year. The next cross country season, Bishop-Hendricken, a state powerhouse, shocked the rest of New England when they won the NXN Northeast Regional Championship and qualified for the national meet, the first for Rhode Island.