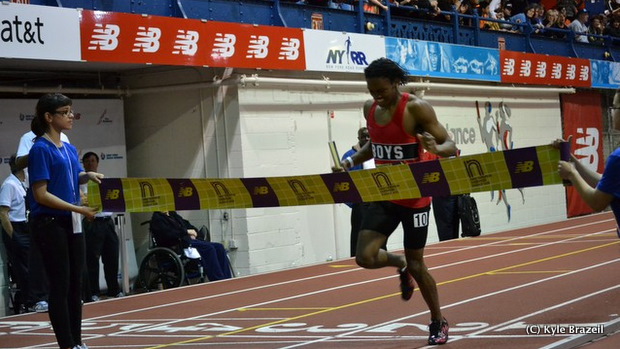 An exhausted Rhodes gets to the line in time. (Photo by Kyle Brazeil)

Brooklyn's Boys & Girls High School was right at home in New York City tonight at the Washington Heights Armory. The Kangaroos, long known for their success in the sprint relays (they are defending champs in the 1600 meter relay), notched a new title on their belt with an exhilarating come-from-behind win in the 3200 meter relay.

And while they entered as one of race favorites, they needed an all-out effort from Senior Robert Rhodes, who's anchor leg made all the difference.

Rhodes had 20 meters and two teams to reel in when Javaun Grant handed the baton to him. Rhodes ran a sub-50 opening quarter and caught his target with two laps to go. From there he had to decide if he would sit or pass him.

For Rhodes, the decision was an easy one.

But some thought the move left him vulnerable to a response move.

"I thought he made the move too fast," said his Hall of Fame coach, James Jackson. "But Robert is a really intelligent racer, so I trusted him."

By the time Rhodes broke the tape, he had split a personal best 1:51.61 and the chase pack was at the other end of the straightaway. Cherokee High School finished second, in 7:43.64.

"Everybody was ready," Jackson said. 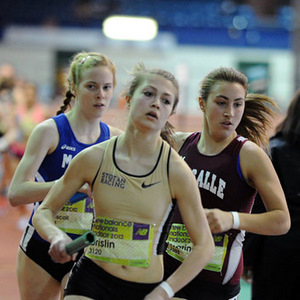 Katie Brislin begins to break away on the 2nd leg. (Photo by Don Rich)

Coming into the girls 3200 meter relay tonight at indoor nationals, Fayetteville-Manlius coach Bill Aris doubted that his goal time for the team would be good enough to win.

So it came as a surprise to Aris and the F-M runners when they crossed the finish line in 8:58.16, looked back and no one else was there.  Heather Martin led off in 2:18, despite running in only her second race of the season after coming back from a lengthy foot injury.  Then the magic happened as Katie Brislin took control with three laps to go and powered way ahead of the field with an amazing 2:11 split.  Jillian Fanning kept the pressure on with a fast 2:13 leg and Katie Sischo ran 2:14

The result was an impressive victory and a US#4 All-Time mark for the Stotans.