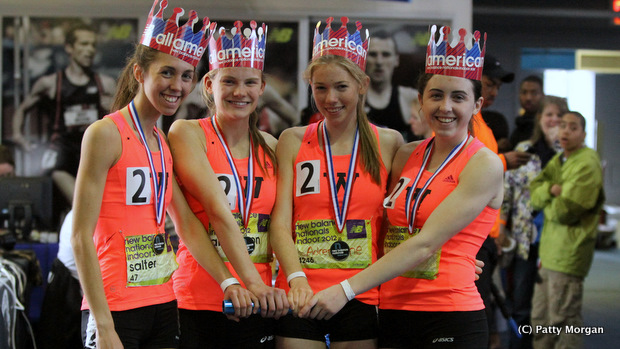 On Saturday afternoon, the Tatnall girls 4 x 1 mile relay team easily won the national championship, besting runner-up Saratoga girls by more than 15 seconds. But they also fell just short of one of the their ultimate goals – to eclipse Saratoga's national record in the event.

"It was so attainable when you put it that way," said 3rd leg Reagan Anderson, who's 5:00 split was about eight seconds shy of her personal best.

"I'm sure we all could have gone faster," said anchor Haley Pierce, who's 4:55 split came just 14 hours after running a 47-second track PR in the 5000 meters. Pierce, who's run 4:41 in the 1600 meters, said she was hoping to run sub-4:50 but the quick turnaround after last night's late start hurt more than she expected. "It's always hard to get that close to the record."

But Pierce was quick to put it in perspective. They were still the national champions and they are still the second-fastest team ever in the event. "You can't be super upset about it," she added.

At least they made it to the starting line this time, unlike last spring. In Greensboro, N.C. at the national outdoor meet, the same Adrenaline team had their sights on the record, but when Pierce came down with flu-like symptoms, their hopes were dashed. Pierce struggled through the 5000 meters two nights before the relay and when she couldn't recover, their coach, Patrick Costagno, scratched the team.

"They were pretty disappointed," Costagno said.

Ever since then, Costagno said, the team has prepared their training around plans to return to the event. "Since spring of last year, we've been talking about it."

Having fallen short, Costagno said they'd continue to talk about it.

"I think we'll look somewhere in the early spring, we might try it again in a fast meet," Costagno said.