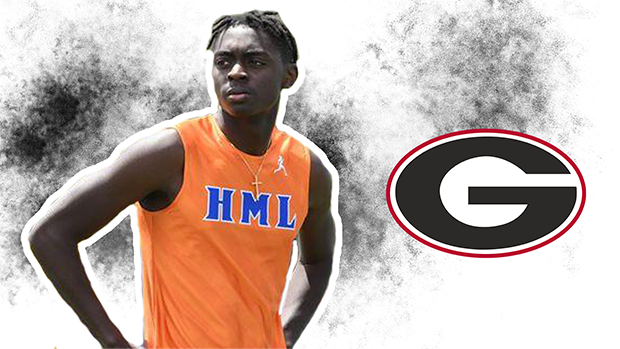 NLI SIGNING WEEK IS HERE -- The home visits began to separate one coach from another. It was there, Mekhi Gammons believed, that he began to see his collegiate future shape.

He said Texas head coach Edrick Floreal, for example, "was really straightforward with everything he was saying."

In the case of Georgia coach Caryl Smith-Gilbert, meanwhile, "she felt like a second mom. She seemed like the type that would be there for me."

Then there was Southern California and Quincy Watts. "The relationship with him was more of a relatable one," Gammons said. "He ran the 400m. We had a lot to talk about."

Three different perspectives, three powerful programs. All were recruiting Gammons, an accomplished high school track and field athlete at Miami Hialeah Lakes, with 21- and 46-second speed in the 200m and 400m, respectively.

USC, Texas and Georgia were his final choices.

The deciding factor? That may have come when Gammons, the 12th-ranked recruit in the Class of 2023, stepped on campus in Athens, Georgia.

On Wednesday, during the first day of the National Letter of Intent Period, the Florida sprint star signed with the University of Georgia in front of family and friends.

"I chose Georgia because with the track side, it's a great team," Gammons said. "They have a lot of potential. But Coach Caryl, I also think she can get me where I need to get. I see her doing it with her athletes now."

Gammons wasn't only talking about track.

The 17-year-old ultimately wants to study psychology and then enter the sports field. During his official visit in Athens, Smith-Gilbert set up a meeting with one of the team's sports psychologists.

"That really made me comfortable," Gammons said.

That same spring season, he finished second in the FHSAA Class 3A 400m finals -- by a mere thousandth of a second -- and was second at the AAU Junior Olympic Games.

Gammons didn't always win. But the Hialeah Lakes star often found himself in the finals of races.

During his visit to Georgia, he said, he was part of a Georgia tailgate, sat on a thrown built for incoming recruits, explored the campus and spoke with current athletes on the team.

It all felt, well, right.

"They were bringing me into their family," Gammons said. "They were showing me I was a part of the family."

As Gammons looks toward his collegiate future, he says Smith-Gilbert will work with him to "break down the 400m and learn it step-by-step."

Just last year, Georgia signed one of the nation's top 400m and 800m stars, Will Sumner; Shamali Little, an elite hurdler and sprinter; and Alon Rogow, an outstanding pole vaulter.