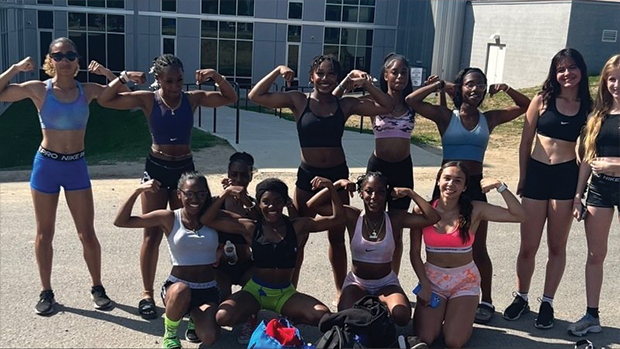 * Members of the Albany (NY) High School girls team have started a petition online to allow for them to wear sports bras in practice, much like boys who often go shirtless

According to accounts from Albany athletes, Albany School District Athletic Director Ashley Chapple asked members of the girls team wearing sports bras to leave practice last Thursday, citing such attire as inappropriate for the girls to wear in the presence of male coaches.

The athletes, who said they saw their practice attire as acceptable considering male members of the track and field team could participate without shirts, complied with Chapple's request and left Thursday's practice.

"The athletic administration staff is attempting to exclude us from our sport as a result of the misinterpretation of the dress code. We're being punished for practicing in sports bras in the presence of male coaches, while the boys team was asked nicely to put shirts back on and was not punished," reads the petition.

The petition has nearly 4,000 signatures as of Thursday.

However, an exchange regarding the dress code matter occurred later on Thursday as members of the girls track team were reportedly denied entry into an Albany lacrosse game by Chapple and three security guards. Thirteen female athletes received a suspension last Friday following the incident at the game.

According to the Times Union, Chapple delivered letters to each of the girls suspended on Friday, citing use of vulgar language and inappropriate behavior on part of the athletes at the lacrosse game as reasoning for suspension. Johnson and other suspended members of the team denied using any foul language described in Chapple's letters.

In the closing paragraph of each letter, Chapple said each suspended athlete "poses a continuing danger to persons or property or an ongoing threat of disruption to the academic and athletic process," according to reports from the Times Union and the New York Post.

Johnson, other members of the team and parents told the Times Union that they found Chapple's letters characterizing the athletes as dangers concerning and were displeased with the content and nature of the letters.

On Monday, Albany High School officials, including Chapple and Albany High School Principal Jodi Commerford, held a closed-door meeting with the suspended team members, prohibiting parents from attending. Officials reinstated 12 of the athletes to the track team following the meeting, yet school district officials denied the suspensions correlated with the sports bra debate.

Albany School District Director of Communications and Operations Ron Lesko sent a statement from Superintendent Kaweeda Adams to the Times Union that said the suspensions stemmed not from the content of the sports bra debate, but from the lacrosse game altercation itself.

"Members of the Albany High School girls' track and field team served a suspension Friday due to inappropriate and disrespectful behavior directed toward an administrator. Their suspension was in no way related to wardrobe. It was entirely related to their inappropriate conduct, and in alignment with our Student Code of Conduct," Adams told the Times Union.

However, athletes said they saw the meeting as a form of silencing their thoughts on the sports bra debate rather than hold an open discussion on the matter.

An update posted on Monday to the online petition by Johnson expressed little satisfaction with the meeting with school officials.

"No progress has been made," reads the petition update.

Reinstated Albany athletes went on to compete at the Suburban Council meet on Wednesday after not competing at the Shen Invy meet on Saturday as a result of the suspensions.

Affected athletes remain committed to changing the conversation around sports bras as acceptable attire, and following Monday's meeting with school officials will look to participate on a committee to review next school year's student code of conduct.

Female empowerment, from a former runner whose team was DQ'ed for wearing the wrong attire

Johanna Gretschel: How I learned to stop worrying and enjoy the bun