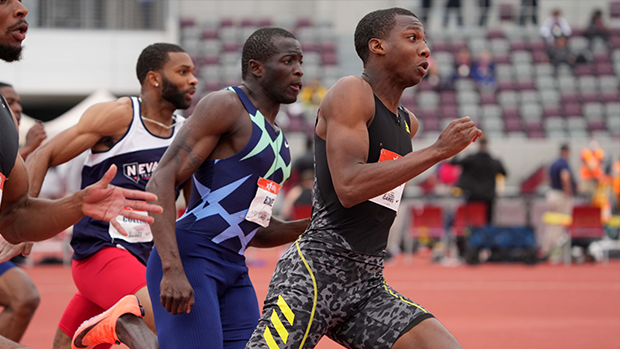 In the first round of the 200m at the U.S. Olympic Trials in Eugene, Oregon, Knighton bettered his World U18 best from May, posting a winning time of 20.04 (-0.2) in the first heat of action. That performance, on paper, would have broken the high school national record of 20.09.

While Knighton is currently a pro with adidas, he still remains in high school. However, his performances do not count in the high school record books.

Knighton's first round performance was slightly ahead of Noah Lyle's time of 20.19, but it was also ahead of Lyles' effort of 20.09 seconds from 2016 when he was a senior at TC Williams.

Five years ago, the former Virginia athlete made his biggest statement finishing fourth in the 200m at the U.S. Trials and securing his own national record. Knighton could follow the same path and more.

Knighton did him one better on Friday.

The 17-year-old has one more year of high school left. He's based in Tampa, Florida.

His performance also lowered his previous best of 20.11 seconds from May 11 at the American Track League, which was a World U18 Best.