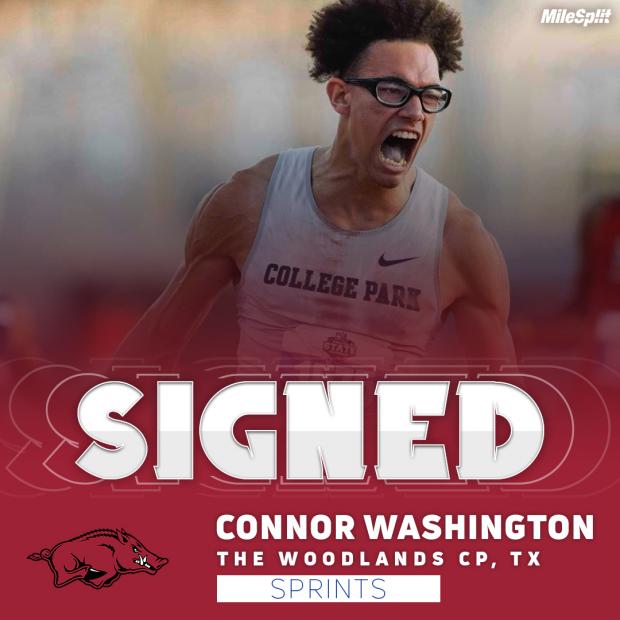 Connor Washington made sure not to rush his decision.

In fact, it took nearly seven months for The Woodlands College Park senior to finally sign his name on the dotted line for his National Letter of Intent and secure his position at the next level.

But sometimes, that's what it takes.

And what a last-minute scoop it will be for University of Arkansas, which landed the MileSplit50 No. 2 Class of 2021 recruit just a week after the UIL State Track and Field Championships.

Washington is part of a Razorbacks class that also includes The Woodlands Christian's Ben Shearer (No. 29 on the Class of 2021 recruiting list) and Har-Ber's Reuben Reina. The women's class includes MileSplit50 No. 3 recruit Sydney Thorvaldson, No. 36 Allie Janke and No. 49 Heidi Nielson.

Washington finished off his final regular season meet in style, winning two Class 6A State Track and Field championships in the 200m and 4x400 and another runner-up in the 100m.

He ran a state-leading and US No. 2 wind-legal time of 20.39 seconds in the 200m, while he went lock-and-step with Jose Garcia in the 100m and closed off with a wind-aided time of 10.00, a performance that will go do for No. 3 all-time in high school history.

Of course, Washington wasn't simply a big-meet athlete, though.

He secured five sub-10.4w times over the Texas regular season in the 100m and two sub-21 efforts in the 200m, both coming in his last two outings.

Over his career at The Woodlands College Park, however, he proved to be an apt athlete at 400m, clocking a career best 47.43 seconds outdoors and a time of 47.96 indoors.

As a sophomore he finished third in the UIL Class 6A 400m and won an AAU Junior Olympic Games title in the 100m.

Washington's preamble to the state championships was special

Connor Washington's patience has made all the difference