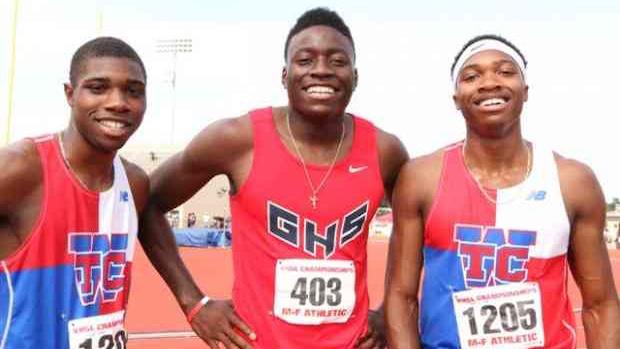 Brothers Noah and Josephus Lyles of T.C. Williams will team up with fellow Virginian Grant Holloway of Grassfield for some dynamite relays at the Caribbean Scholastic Invitational.

For the first time in nearly 20 years, a contingent of athletes is representing the United States in competition in Cuba this weekend as part of the Caribbean Scholastic Invitational.

The National Scholastic Athletics Foundation (NSAF) chartered a group of high school underclassmen to Puerto Rico for the meet from 2006 to 2013. With one year off, the meet is back with a new, trendy location - Havana, Cuba - as athletes are challenged not only to be the best runners, jumpers and throwers they can be, but also model citizens and diplomats to a country on traditionally tenuous terms with the United States.

NSAF Executive Director Jim Spier traveled to Cuba in 1997, the last time the United States sent a delegation of athletes to Cuba. The event was the Pan-American Junior Championships and they hardly made it - the group had to apply for last-minute credentials on the Monday before the event.

With President Obama in the White House, the United States has steadily eased up on its foreign policy with Cuba. In 1997, the athletics group had to obtain a special license to receive permission for the trip. This year, the NSAF flew down to Cuba in January to scope out the host venue and applied through the old system to obtain credentials before receiving word that the process is no longer necessary.

The caliber of Cuban junior athletes and historic nature of a Cuba trip is worth the paperwork hurdles, according to Spier.

"I always wanted to go there for a meet, we know they always have great teams and great junior teams," he said.

The NSAF is primarily known as the organizing body behind the New Balance Nationals Indoor and Outdoor track and field championships. But the goals of the organization extend much further beyond meet execution to the development of elite youth.