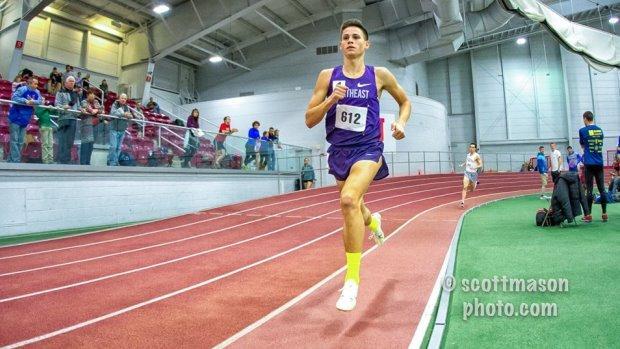 Could D.J. Principe be the next schoolboy to crack the sub-four-minute mile?

Since 2015, two preps have broken the historic barrier every year: Matthew Maton, Grant Fisher, Drew Hunter, Michael Slagowski. There's a slew of boys who seem capable of continuing the trend in 2017, and Principe is at the top of that list after clocking 4:04.47 in December -- the seventh-fastest indoor performance in prep history.

On Saturday, Principe will race the Men's Elite Mile at the New Balance Games at the Armory Track and Field Center in New York versus a professional field that includes the likes of Hunter, a 19-year-old who is making his debut indoor performance in an Adidas kit, and former Rhode Island high school star Nick Ross, who cracked four minutes for the first time last June. Rabbits will take the field through 800m in 1:58 and 1200m in 2:59.

If Principe is putting any pressure on himself, he's keeping it to himself.

"I'm just looking to PR," he said. "I'm used to being the guy who's doing a lot of work, so I want to take advantage of the pacers and strong field.

"My strategy, I guess you could say, is to make sure I'm engaged the whole time. I'm assuming that there's a few guys who might fall off, and if I get locked behind them, I'll get disconnected from the guys up front. I just want to be ready to go in the last 400m."

The senior at La Salle Academy in Rhode Island will compete for Stanford University next year, and his academics have been top priority over the past few weeks. We spoke briefly by phone on Wednesday after he left a study review session for final exams.

"I really haven't done too much yet," he said when asked about his toughest workout so far this season. "Last week, I did [three sets of] 400m, 400m, 800m with the middle set really hard to get the legs moving but not take too much out of me."

He said his best workout so far this season was his triple at the Dartmouth Relays, where he anchored the winning 4x800m and DMR (4:16 1600m split) relays and won the 1K in 2:27.86, the second-fastest time in the country this year.

Principe after his Dartmouth Relays triple:

"I've been at mid-50 to 60 [miles per week]," he said of his current training, "but I got sick at the beginning of last week and that dropped my mileage down."

That's about 10 miles per week less than he accumulated during the cross country season. Principe became a national title favorite in the fall after lowering Nick Ryan's 15:28 Bowdoin Park course record to 15:23, then 15:18 in winning the NXN Northeast Regional. His only loss of the season was a 14:32.2-14:32.4 course record contest at the Great American XC Festival to Brodey Hasty.

But in December at Nike Cross Nationals, Hasty, a junior, placed third while Principe was never in contention for the title. He finished a well-beaten 21st, 33 seconds behind champion Casey Clinger, and said he suffered some mild sickness during the week leading up to the race.

Seven weeks later, Principe says the lackluster performance has motivated him for track.

"The way cross country season was going, I had big goals for nationals and pretty much none of those goals were met," he said. "The rest of the year, I've got to try and work hard and make up for the opportunity I missed."

He's already well ahead of schedule.

"That was definitely a pretty big one for me. Not that I didn't think I could do it, but I certainly wasn't planning on running that fast then. I still don't think I'm in full swing."