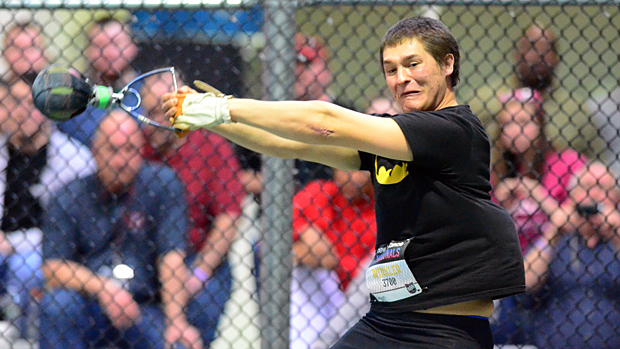 MileSplit - Rudy, the Hammer is a tough event. You have really taken outdoor by storm this year in that event! What was it like to get a legal throw of 253-05 for US#3 performer All-Time? Talk a bit about that…

Rudy - Hammer has been my main/only event for the past 4 years. I stopped throwing shot and discus all together after my sophomore year, so it's been my life ever since. It feels pretty good to get a legal throw of 253'5"! There is a lot more in the tank though, and it could have been even further if I had connected just a little bit better.

MileSplit - Describe the technique of the hammer and what is necessary to achieve a great throw with it?

Rudy - Hammer is a strange sport. Everyone will tell you to do different things, and usually none of them work right away. You have to find a coach that works best for you, along with finding your own rhythm with your technique and training. So, just finding what works best for you is what I'd say is the most important, just like most other sports.

Rudy - I'm in pretty good shape to be throwing hammer right now. I'm stronger than ever, and I'm more focused than I've ever felt. I have a few technical things I need to fix before some upcoming meets, but my coach and I will figure that out soon enough. I don't know how far I can throw this year. All I know is that my official PR did not feel like a great throw, so there's a ton more in the tank.

Rudy - This year, so far, doesn't feel any different than last, athletics wise. I'm just trying to finish up the year as of now. I'd say what makes me most excited is my acceptance to Cornell University, which is where I'll be studying and training next fall.

MileSplit - What stands out as the most exciting thing about your entire throwing career so far?

Rudy - Most exciting thing of my career thus far has been my opportunities to travel to other countries and competing for team USA. Also, my acceptance to Cornell is high on my list, if not tied for first with traveling. I've had some pretty good opportunities and im sure there will be many more to come.

Rudy - I joined a small club track team, called the Averill Park Road Runners, when I was in fourth or fifth grade. I ran a little bit, I high jumped a little bit, but the events I liked the most were the throws. Plus I was way bigger than everyone else, so throwing made more sense. I joined the highschool team in 7th grade (we had no middle school team) and got better and better as time went on. Eventually my coach had me throw weight, which led to me throwing hammer. I met my coach, Paddy McGrath, at new balance indoor nationals in ninth grade. Ever since then I've been throwing under Paddy's instruction and have been getting better every day.

Rudy - My parents have been huge supporters of everything I've done in my life, and are definitely the biggest source of inspiration to me. Besides my parents, every coach I've ever had has been a huge support. I still talk to most coaches I've had; some coaches still help out with getting me meets and such.

Rudy - Persistance is the biggest "secret" to my training. People try things that don't work and they give up on them. I've been able to push through my bad practices and keep throwing, despite being angry or disappointed. I've had many more bad practices than good ones. In fact I think the bad practices teach me more about my throwing than the good ones. It's all about persistance. It doesn't matter if you threw bad today. Come back in a day or two and keep plugging away.

Rudy - Nationals is always a fun meet. Great place to compete and to see good friends of mine. Though, my favorite meet to date would have to be Junior Worlds in Barcelona, Spain. No place else have I ever seen such great tallent, along with meeting such great people. It was one of the greatest weeks of my life and I will never forget it. I also threw pretty well for myself there. So all in all, Junior Worlds was awesome!

Rudy - This is a tough question. I'm not actually sure what my favorite performance by a pro/college athlete is. Lance Deal's performance in 1996 was pretty sweet though, and the only thing coming to mind right now. If you don't know it, look it up. It is worth a search.

Rudy - There are a lot of people that I enjoy seeing/competing against at meets. Charlie Ionata from Rhode Island is always great to compete with. He is not only a great athlete, but a good friend of mine. Meets between us usually involve a lot of trash talking and a lot of laughs. The guys from Georgia, from the club Throw One Deep, are always fun to compete against as well. They always have some of the best throwers and it is fun to see what they bring to the table at each meet.

Rudy - As for most people you interview for these chats, my main goal for the future would be to compete in the Olympic Games. Not sure what one yet, but it would be extremely fun to go, and would be quite an event to compete in.