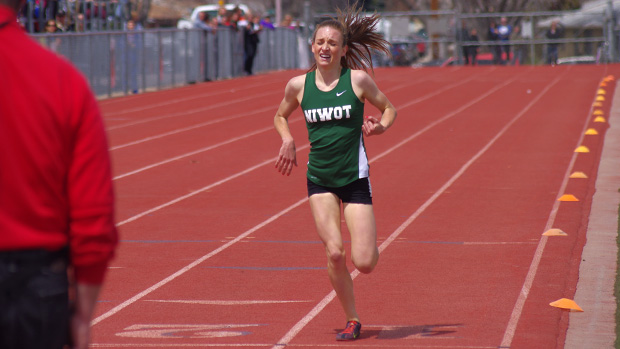 Elise - It is an honor to be included in the rankings with Melody Fairchild. She has had such a successful career and she continues to run at a high level. She is such an inspiration. Breaking the record is really exciting, but it hasn't really sunk in yet. I don't think it has sunk in yet because the idea of breaking such an established record is very difficult to grasp and I still have to stay focused on upcoming meets.

MileSplit - What stands out as the most exciting thing this year with what you have accomplished on the track, indoor or out?

Elise - The most exciting race for me this year would have to be the New Balance Indoor Nationals. I loved racing against such high caliber runners and the crowd in The Armory was incredible. There was so much excitement. I also loved this race because it gave me a lot of confidence and it taught me how to be really competitive.

MileSplit - What is it like coming down from altitude to run at a meet like the NBNI where you dropped huge time from your indoor PR? What effect does it have on you if any?

Elise - Because I had only run one indoor meet prior to NBNI, I wasn't really sure what to expect. Based on my training and workouts on the outdoor track, I knew that I was ready to race. I was hopeful that these key workouts would translate to a fast indoor mile. I expected racing at sea level would help me run a PR, but I didn't think I would run an 18 second PR. The atmosphere and competition allowed me to race at a whole different level.

MileSplit -  What goals have you thought about for the 2013 track season? How fast do you think you can go and in what events?

Elise - My main focus for the rest of the season is the Colorado State Meet. I am looking forward to preparing with my team for this meet because we want to win a state championship. One of our goals is to win the 4x800 meter relay at the state meet. My focus for this season and the post-season races is the mile.

Elise - I did some track and field starting in sixth grade with my middle school, but my main focus in middle school was soccer. I didn't really focus on running until my freshman year of high school. I started with cross country in the fall and really enjoyed the program. All of the cross country runners loved doing track too so I began to look forward to track in the Spring.

MileSplit - Person/people most influential to your success in track & field and why?

Elise - As a freshman on the cross country team, I was coached by Doug Duffy, Angelina Ramos, and Jason Hartmann. As my running progressed, Jason continued to help me with my running. He has been an inspiration to me because of his past and present success in the running community. He has a great deal of confidence in me and he keeps me grounded. My current high school coach Maurice Henriques and my teammates also influence my success in track and field. They are very supportive and encouraging. Coach Mo has a history of coaching high level athletes such as Sarah Cocco. His training and advice is very valuable. My parents are also very influential because they keep me balanced and healthy.

Elise - Eating healthy, getting enough sleep, and strength training. Swimming in the winter and summer also helps me gain cardiovascular fitness and gives my legs rest.

Elise - BOCO because of all the local teams and local support.

Elise - New Balance Indoor Nationals because it brought my racing to a whole different level and it gave me a new level of confidence in my running.

Elise - I don't have a specific favorite performance, but I enjoy following Abbey D'Agostino. It was incredible to see her win the 3000 and 5000 at the NCAA Indoor Championships. She is also an inspiration because she is healthy, successful, and a great student.

Elise - Claire Green, Rachael Chacko, Erin McLaughlin, Katie Rainsberger, and Heather Bates. They are great athletes, have great attitudes, and are fun to be around.

Elise - New Balance Indoor Nationals. I loved running at The Armory with all the people and competition.

Elise - Stay healthy, continue to have fun, and continue to improve. I would love to run at a Division 1 college and be a valuable member of a successful team.

Check out what Melody Fairchild had to say about Cranny breaking her record and what she is up to now!

*In 1991, I was prepping for my goal of winning the World Jr. XC Championships. My mother was dying of cancer and my father had lost his job; I was running on adrenaline and with huge fear about the unknown that my future held. No doubt, this stress fueled me to break the National indoor 2 mile record and to set state records in Colorado. After finishing 3rd in the World Championships, and taking care of my mother as she battled cancer, the state record was a satisfying happy moment. I remember celebrating it with my father, in a hug over the fence at the finish line.

*I was surprised that my record lasted so long, with talent such as the Kaltenbach sisters and Eleanor Fulton.

*I think Elise's potential moving forward is Huge. As it is for all young talent. The key is that she keep it in perspective and, in the words of my first junior high track coach, Mr. Montoyer: "take it in stride." these days, with all the media, which = pressure, elite athletes have to know themselves very well, have great inner discipline and the ability to block out hundreds of distractions surrounding them, 24/7.

*I have Boulder Landsharks, a 400- kid strong fun run club for kids in Boulder; I hold my annual middle and high school girls developmental XC running camp in the summer; I coach athletes in Boulder to their running goals; I teach the Feldenkrais Method and fitness classes at Rally Sport Health Club in Boulder and I am training for a PR in the marathon this year -my first as a master (40 this year) :0

Thanks!!! I appreciate the opportunity to contribute! Melody