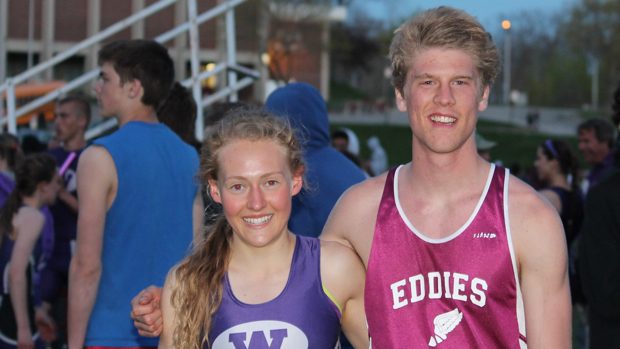 MileSplit - Bethanie, 10:13.90 is a pretty serious time with competition!  What does it feel like to accomplish this by yourself?

Bethanie - It feels really great – almost unbelievable! I have to give credit where credit is due, though. They combined the boys and girls 3200 since it was a small meet, and I was able to run with the boys. I’m not sure the boys thought it was as fun as I did. I think it really motivated everyone. I got a PR, but so did the boys I was running with. One boy had a lifetime PR of 20 seconds.

MileSplit - What are your initial thoughts on setting the state record?

Bethanie - I think it’s pretty incredible. I actually can say that in this last 3200, I surprised myself. I didn’t go out running for the record. I was just hoping to PR from the previous lifetime PR that I had run a couple weeks before, which was 10:22. When I ran across the line, I was thinking, “Wow! 10:13!” not, “Record!” Coach Wilson mentioned it to me later, and I said, “Oh, wow, you’re right!” I watched Abbey Leonardi run that 10:19 at the New England Championship meet 2 years ago. I ran an 11-minute 2-mile then, and it seemed so fast it seemed out of reach. To have come so close to the 10-minute mark is very exciting.

MileSplit - What stands out as the most exciting thing this year with what you have accomplished on the track?

Bethanie - This year, I’d have to say the 10:13. My indoor season was good, but not fabulous, so this is really exciting.

MileSplit - How tough was the Maine winter this year as far as getting quality training in?

Bethanie - Very tough. It’s hard to get track time, which means that my training did not include many speed workouts; I only did a couple during indoor track, and that was when the outdoor track was free from snow, but the cold made it hard to get a quality workout in. Mostly I did road runs bundled up in a hat, underarmor, mittens, and on the occasional REALLY cold day, a face mask.

MileSplit - What was your focus during the indoor season, as you tripled at NBNI with modest (by comparison) times.

Bethanie - I knew I wanted to compete at Nationals, because I went last year and it was really fun. Unfortunately, near the end of the season I had a little muscle injury in my foot and actually only ran 5 days out of the 21 days before Nationals. I was planning to decide to do the 800 and either the mile or the two-mile, but after the two-mile I decided that even though I felt dead, I might as well do the mile anyway. I had gone all the way to New York, so I thought, “Why not get a good workout in?” I definitely felt that my fitness level was down a little, but I love to race so I just ran anyway.

MileSplit - What goals have you thought about for the 2013 track season? How fast do you think you can go and in what events?

Bethanie - Well, in the 3200 I already exceeded my own expectations for myself, so I guess I’ll have to rethink my goals for that one. I’d love to break ten. I feel like I have it in me. I don’t know if I’ll get the chance to run a good fresh 3200 again this year, because we have championship meets coming up, but that would be beyond awesome. I’d like to improve my mile/1600 m PR. I just ran a 4:51 in the mile at the Loucks Games and it felt pretty good, so I’m excited to run it again.

Bethanie - In 6th grade I did cross country as a fall sport because soccer was only for 7th and 8th grades at the junior high. I didn’t know I was going to be good at it, but when I won a lot of races that year, I discovered that I was good at running. I did outdoor track that year and have been running track since then, but I didn’t really take it seriously and train during the off seasons until high school.

Bethanie - My coach, Ian Wilson, has been very influential to my success in track. He is the head track and field coach at the high school. He’s very dedicated and takes the sport very seriously. He is very motivating to everyone on the team. He knows a lot about the sport, so he has good advice, and he is good at getting everyone excited and serious about competing. He’s the one who told me I needed to buy a pair of spikes when I got to high school, and he tells great motivational stories and plans good workouts for me.  Also, my parents are really supportive of what I do. They’re teachers, so sometimes it’s hard for them to take me to meets out of state during the school year, but they have managed to get me to a lot of cool meets. There are also a lot of supportive people on my team and in my community, which has been great. People are excited about what I have been able to accomplish.

Bethanie - I’ve started doing regular track workouts each week. Last year in Indoor I did one track workout, and in Outdoor I did two. In Indoor this year I only did a few track workouts, but in Outdoor I’ve been doing a workout on the track each week. Also, I’ve learned to keep a running log so that I can keep track of my mileage and make sure it doesn’t drop off. It does tend to vary especially as the championship meets come up.

Bethanie - I think my favorite T & F meet is New Balance Nationals. It’s just really cool to be surrounded by such talented athletes and to be able to watch them compete. Also, the races are always really fun, and I like traveling and staying in a hotel; it’s a track vacation!

Bethanie - I think my favorite performance in T & F was the New England Championship in Outdoor Track last spring. It was in Maine, which was great, and I decided to double. People asked me why I would do that when I could just save myself for the 3200, but I just really wanted to do the 1600 too, and I ended up winning them both. That was really cool because the year before at the New England meet I had only run the 1600; I wasn’t even seeded to place but PR-ed to place 6th with 4:58, and then a year later I won both the 1600 and the 3200. That was a huge accomplishment on its own, but I was also proud of the improvement that I made in one year.

Bethanie - I was really glad to watch Sabrina Southerland set the 800 record at New Balance Indoor Nationals this year, because I had only ever seen Mary Cain run that fast at the Loucks Games the year before. I was really impressed by how strong she looked, and I thought it was really impressive that she could improve that much that quickly and run such a great time.

Bethanie - I ran the junior mile at the New Balance Indoor Grand Prix in January, and had the opportunity to watch Dibaba run the two-mile. She ran it in 9:13, I think, and that was just really incredibly amazing. She ran way ahead of the pack of professional women who were all running sub-10. It was an inspiring race to watch. She ran each of her two miles faster than I can run one. But hey, now I’m only a minute away from Dibaba’s two-mile time!

Bethanie - I enjoy competing against Wesley Frazier. She is consistent; she always seems to have a plan, and knows what she’s doing. I competed with her in the Grand Prix junior mile this year, and at nationals last year. She’s a great athlete.

Bethanie - That was probably the 1600 at the New England Championship meet sophomore year. My PR had been 5:06, and I ran 4:58 that day. I wasn’t seeded to place and I got 6th. It was just a really memorable experience, because I was running and thinking, “Why aren’t there more people in front of me? What’s going on?” and then I broke five, which was unexpected, and placed. My team joked about it because I earned Waterville’s 1 point that day at the New England meet. It was only my second meet out of state (the first being the Dartmouth Relays in Indoor the previous season), and so it felt really big; it was the biggest meet I’d ever been to, and so I couldn’t believe I had placed.

Bethanie - I’m going to the University of Connecticut next year, and I’m looking forward to competing in college. As a long-term goal, I think it would be really cool to qualify for the Olympic Trials. That would be amazing. I think I will probably end up being a 5K – 10K runner in college, but I’d love to improve my shorter distance events too. I want to run under 2:10 in the 800 someday.

Bethanie - That’s a hard question. . . I think I’d have to say eggs. I usually have an egg sandwich every morning for breakfast.

Bethanie - Beach – I like to boogie board, and we have great beaches in Maine. I connect the beach with sunny days and summer, which are some of my favorite things.

Bethanie - Going out if it’s during the day. If it’s nighttime, chilling at home. I’m not really a night person; I like to go to bed early when I can.