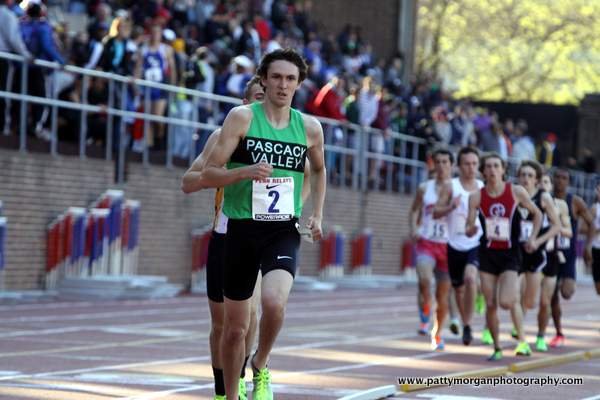 Malone gunning for McGorty in the COA Mile at the Penn Relays. (Photo by Patty Morgan)

MileSplit - Ben, you have been on a roll so far this outdoor season!  You won the Loucks mile in a slower time (if you could call it that!), but an awesome tactical race.  Talk a bit about that…

Ben - Well I've been pretty happy overall with how its gone so far. This is really my first injury-free outdoor season and I'm truly enjoying it.  Penn didn't end up the way I had wanted it to, but I've learned a lot from that race and it can only help me for the future.  Loucks was a lot of fun, I went in there with no pressure and just wanted to enjoy myself and that's what I did. I knew I was capable of running with anyone in that field and I was happy to come out on top, but at the same time excited to race Edward again the Dream Mile.

Ben - It's truly humbling to have my name on the same lists as some of the legends such as Kevin. He's an all-time great and to accomplish something that he did in high school really speaks to the significance of it. Truly an honor to have one of his records.

Ben - I believe I'm in the best shape of my life. My goals have stayed the same since the beginning of the year. I'm never one to throw numbers out there but I know what I'm capable of and I just have to focus on doing one thing for my next couple of races and that is crossing the finish line before everyone else.

Ben - This school year has been a lot of fun. I've had a lot of great experiences and I'm really enjoying myself. If I had to pick one thing, it would probably have to be winning the Milrose Mile. It wasn't a crazy time or an all time performance but it really gave me my confidence back after a shakey cross country season and it put me in a select group of some really incredible runners who have won that race before me.

MileSplit - What stands out as the most exciting thing about your entire running career so far?

Ben - Whew, this is a tough one, there have been so many things that I've just been so lucky to be a part of and I'm so thankful to have the opportunities that I've had. I think picking out one thing would be doing all of the others an injustice, but to single on out, running at Hayward field during the Olympic trials was something I'll never forget for the rest of my life.

Ben - I started running in middle school because my dad has always told me about how he was a runner in high school, college and after college. I ran the 100/200/400 and had a lot of fun with it, and the distances may have changed but the enjoyment hasn't.

Ben - This is about near impossible to answer. So many people have effected my life and my career in such great ways and I would need an entire book to thank each one of them. First and foremost comes my mom and dad. They've done everything for me and supported me through thick and thin and have always acted in my best interest. I wouldn't be anything without them. Then of course comes Coach Murtaugh. Along with being a great coach and mentor, hes been a great friend. We've experienced this roller coaster ride together and no one knows what I've go through at each race and each day better than him, and I couldn't think of anyone better to go through it all with. So many memories we have created throughout my career and we will both never forget them.

Ben - There's no secrets and nothing ground breaking. We've kept it simple, and just focused on staying healthy and staying focused. One thing my coach has told me is your gonna hear a lot of things from a lot of different places and people try to over complicate things and over think things, and hes taught me that at the end of the day all you need to do is focus on giving your greatest effort to win the race and at the end of the day if you can say that, only positives can come from what you accomplished.

Ben - There's nothing quite like Penn Relays. It's atmosphere and history is so great and unique that every time you step out on that track it is a privilege. You can't help but think of all of the greats who competed on the same track. There's no other meet in the world like it and I think that's what makes it so fun.

Ben - If I had to chose, I would go with Robby Andrews running down Andrew Wheating in the Penn 4x800 2 years ago (I think it was 2 years ago). It was such an exciting race and you knew once those 2 anchors touched the batons it was going to be an instant classic and it didn't disappoint.

Ben - Although he has graduated I loved running with Zavon Watkins. He's a tremendous talent, a class act, and great competitor. I think it's also great running against him because we're so similar in the way we want to race. Can't wait to see him in college.

Ben - Its hard for me to think about long term goals because there are so many different variables in track and field and so many different things can happen to change the future. So I just try to focus one race at a time or one season at a time. Of course I have the dream of making an Olympic team but it's just way too early in my career to be thinking about things like that.

Ben - Anything with Buffalo/hot sauce.

Ben - You go to the beach, then finish off in the pool!

Ben - Always gotta be on top of your twitter game.

MileSplit - Going out or chilling at home?

Ben - Going out, you gotta live it up!