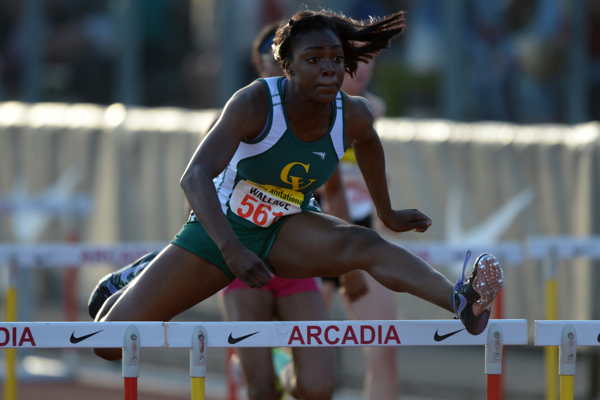 MileSplit: What stands out the most this year of all of your accomplishments on the indoor track?

Sasha: The hurdles have been an event where I've worked really hard to improve. It took a lot of work to get to the times I have so far. What really stands out are the meets and the competition itself, especially the fact that I'm tied with such a good friend for the #2 all time 60m hurdle mark. We both really worked hard to achieve the time. (Editor's note: Dior Hall, CO has also run 8.17).

MileSplit: What are your thoughts on getting so close to the national record in the 60, but just missing it twice?

Sasha: I'm not really upset about it. I feel blessed to have gotten so close. There is nothing bad or disappointing about being #2 all time. I believe I can say I'm in good company. Sometimes it's best to just focus on what you did well, instead of what didn't work out. It was a great accomplishment for me.

MileSplit: How do you feel about how you triple jumped indoors this year?

Sasha: My Coach Curtis Taylor told me that to be a good Triple Jumper you have to be patient. We have worked on the phases of my jumps and I think my progression has been good. The problem with jumping is that you always want to jump far, but to become a technician of your event, you have to work on different aspects which should translate to better jumping later. I am happy with my indoor jumps, but really want to do well outdoors. But there's always room for Improvement, as since Triple Jump is my favorite event, I believe the best is coming.

MileSplit: When & how did you get started in track & field?

Sasha: I first ran for 3M Track Club out of Oakland where I trained under Coach Pittman, we were a part of USAT&F.

MileSplit: Person/people most influential to your success in track & field?

Sasha: I think the most influential person has been my sister because I always admired how hard she worked on the track and she was a really good student too. I've also believe that my loyalty to my Youth Club allowed me the space to develop on my own time, we had no pressure other than to follow rules, practice hard and do your best. My Club Coaches were a huge influence on me as an athlete. Once I entered high school Coach Brewer was really instrumental for me because he gave me a basis for understanding that I had a talent and a gift, so it was important not to waste any opportunity to be successful. Coach Curtis is one of the best in the business, he has a technical approach to events that have made the difference for me. His precise approach to jumping and hurdles just made sense for my learning style. I think it also helps that he has had the experience in developing athletes, so he is patient, which is important for me. I really love the jumps, but I love to try new things, but Im hoping that when I go to college I can try new things, maybe the Pent or Hept, who knows..But the TJ is my love! It was my first field event, and I like how it's continuously learning to master the event, and everyone can't just go out and do it. It's like a puzzle that you work to put together.

MileSplit: Your track & field coaches and what they mean to you?

Sasha: All of the coaches I mentioned have been critical to me. If it hadn't been for a consistent youth track experience, I don't believe I would have understood what it takes to be successful in high school. I'm thankful for them all.

Sasha: I think that embracing one voice, Coach Curtis's philosphy, has been key. Many people get several different messages for the same goal, I think its confusing to an athlete. I also think it's helpful that I believe in what he's saying and try my best to execute.

Sasha: I loved the experience that the Brooks Invitational gave all the athletes. It was an awesome experience. It was so much fun, I will never forget it. But I will say The Armory is an exciting place to run, and the NSAF staff have been so supportive. It's such a rich history in NYC at that meet, and the opportunity to have your name on the wall is an incredible experience.

MileSplit: Your favorite performance and competitors in track & field?

Sasha: I love competition because it makes you better, but it's nice to compete against those athletes I look up too. In hurdling Dior Hall is of course my favorite, Skylar Ross Ransom from Texas and Traci Hicks who attended Poly, who is now at Arizona have been great competitors. It just adds so much excitement, and everyone is trying so hard to do their best. In the TJ, I've grown up in the pit with Cici Brewer, Jennifer Madu and Carla Forbes, so I have to say that having that competition always makes you better. Even when you come in second you win if you PR.

MileSplit: Your greatest experience in track & field so far?

Sasha:  I think that being invited to Brooks was pretty big, but my invitation to the Bahamas to attend the NSAF Triple Jump Camp hosted by the Bahamians was pretty awesome. Spending five days with the best Triple Jump athletes from across the Country was great. It sounds crazy but we were Triple Jumping in the sand next to the beautiful Atlantic Ocean and learning technique from TJ Guru Peter Pratt. I learned a lot about my event at this camp.

MileSplit: What are your goals for the 2013 track & field season?

Sasha: I would really like to repeat as State Champion in both my events. It would be nice to end my Senior Season with good times and personal bests. An important goal of mine is to make a World Team, I will try out for Pan Am this June. It would be so nice to have my high school career end on such a high note.

MileSplit: What are your long-term goals in track & field?

Sasha: I am excited about going to University of Oregon and contributing to the team. Of course I have goals to do well and get better but I believe it's important to take each step and do my best at that time. Otherwise it becomes too overwhelming. I've learned that this is one sport you have to break up in pieces.

Sasha: Beautiful Beaches are so nice and relaxing.

Sasha: I'm always tired because of school and track b ut I love hanging out with my family and friends, so I guess I would say both.

Editor's Note: Sasha added this quote to her interview last night, showing that runners unite no matter the distance between them.  Thank you Sasha.

"Aaron, on a more important note, my prayers and condolences go out to those who have been affected by the awful tragedy at the Boston Marathon. As athletes, fans of the sport of running, its hard to even prepare yourself to understand something so tragic. I hope and wish the best for everyone."

Sasha Wallace not even upset given the injury she overcame NCAA Division I Outdoor Track & Field Championship Jun 11, 2017
Tweets by milesplit