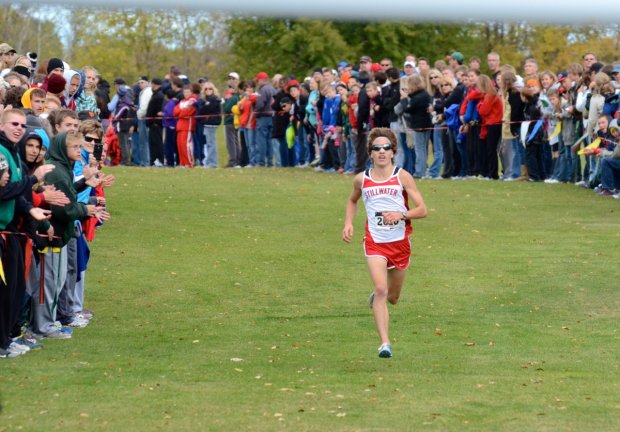 Wayde - It's exciting getting another chance to go at it again. Last year we took a big step as a team and we have an unbelievable atmosphere here in Stillwater, I love getting to run here everyday.

MileSplit - You were 51st at NXN last year and Stillwater was 10th. How does this year's squad stack up to what you achieved last year?

Wayde - We lost our big dog Tom Linner but we're off to an even better start than last years squad.

Wayde - There wasn't a 7th grade soccer team so I joined cross country and then my buddy talked me into moving up to high school and I've stuck with it ever since.

Wayde - The support of my parents, family and coach has helped immensely and the legacy of the program to try and achieve the kinds of accomplishments our runners in the past have. Ben Blankenship is a big one!

Wayde - This year we have one, Scott Christensen. Myself and the team have total trust in him, there's not enough that can be said about Scott. Last year we had an assistant, Ben Blankenship, who's an All-American, both really great guys.

Wayde - Trusting in the system and giving everything you got for the team. Our coach says being a champion isn't what your given its what your willing to give up.

Wayde - I can't say enough about the support we get from everyone on the team and our alumni! JV to Varsity everyone's cheering and picking you up after a bad race or congratulating you after a great race. We compete as fierce competitors on the track and in races but once it's over you give them the credit they deserve, because as runners we can all relate.

MileSplit - Your favorite performance in a cross country race and why?

Wayde - Nike regionals 2011, I finished 13th and after I crossed the line and saw my teammates, there was just a feeling that we had it before even seeing the score. It was incredible!

MileSplit - Cross country competitors you most enjoy competing against and why?

Wayde - Tom Linner who graduated last year was one of my favorite's. Tom and I had been duking it out since I was in 8th grade. Eric Colvin and Seab Bjork who are captains with me and Kevin Docherty who is a fierce competitor out of Cretin.

MileSplit - Your greatest non-running experience in cross country so far and why?

Wayde - Hanging out in the man cave and the annual fantasy football cross country draft.

Wayde - Have everyone running to their full potential and on board to go for the national title at Portland. Individualy I want to push myself towards a state and nxn regional championship and look back on this season knowing I did everything I could for Stillwater.

Wayde - I want to run D1 and put the hard training in and see where it takes me from there.

MileSplit - Olympic hero from this summer and why?

Wayde - Mo Farah, I've never seen anybody so happy before and he did it in front of his home crowd!