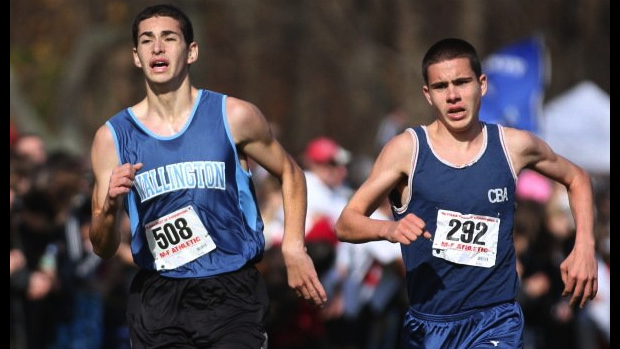 MileSplit - You look quite fit for the beginning of the season. What excites you most about this year of HS XC?

Billy - The whole team has had a great summer, and it was nice to get to air it out on Saturday. I’d be lying if I didn’t say that we were most excited about what we can do at NXN this year. We can’t wait to get to the championship meets.

MileSplit - Without question, CBA had an amazing season last year. You guys look better than ever this year. How do you keep the focus each day in practice to perform like you do?

Billy - It’s not hard to keep focus at practice when you have something to work for. Everyone on the team knows that we’re looking to win the national championship, and we all know that we have to work as hard as we can in order to achieve that goal.

MileSplit - What was the feeling of the team after the victory this weekend, and the record on the course?

Billy - We weren’t going out there to break any records, we just wanted to get a good race in early, so when we found out that we were under the record, even while holding out Sandy, it was kinda the bees knees.

Billy - Before recess every day in fifth grade, my teacher had us run a half mile loop around the school. I would always beat my classmates in these little runs, so my teacher suggested that I run XC in middle school. I’ve been devoted to running ever since.

Billy - My middle school cross country coach, Dave Slavinski had a huge influence on my running career. He really helped me realize that I could do something with the sport. And of course, I couldn’t ask for better coaches than the ones I have now.

Billy - Mr. Heath and Mr. Bennett are the cream of the crop. They know exactly where the team needs to be, and they know exactly how to get us there. We all know that if we want to be successful then we’d better listen to them.

Billy - Dedication. The coaches are dedicated and so are the runners. After that, it’s hard work; and when you’re as dedicated and passionate as our entire program is, it’s easy to put in the necessary work.

Billy - The guys on the team are all really close. We run together every single day, and we hang out together outside of practice. This summer I didn’t run on my own once, we met up for every run we did. Having a unified team is one of the most important aspects of XC. It’s imperative that we aren’t running for ourselves out there and that we’re running for each other.

Billy - My favorite performance thus far in a cross country race is probably at Regionals my sophomore year. The entire team got out horribly, but we were able to move up throughout the race and come back for the win. I felt like I really stepped up and help the team win in this race.

Billy - Every race we have at CBA has a plan, a detailed plan. We really focus on working together to achieve our team goals. So, a few times a year we get to have time trials. It is truly our only chance to tear into each other from a competitive standpoint. Those days are the most fun. We all know each others strengths and weaknesses. It is like a 15 round heavyweight title fight except that 15 people are fighting in this ring. Pretty epic.

Billy - My favorite non-running experience in cross country so far is going out to Nike Headquarters at NXN. It’s awesome out there. Both times that I’ve been out there were unforgettable.

Billy - There is one real goal for us this season, and that is to go out to Portland in December and win. Any other goal is just a step on the ladder up to NXN.

Billy - I plan to run in college. I’ll train my hardest wherever I go, and from there, we’ll see what happens.

Billy - Seeing Galen Rupp silver in the 10k this summer was one of my favorite races that I’ve ever watched, especially because it meant so much for American distance running on the international level.

Billy - That depends on who I’m playing with.

Billy - My Twitter game has been pretty stellar lately.

Billy - I’m always down for the get down