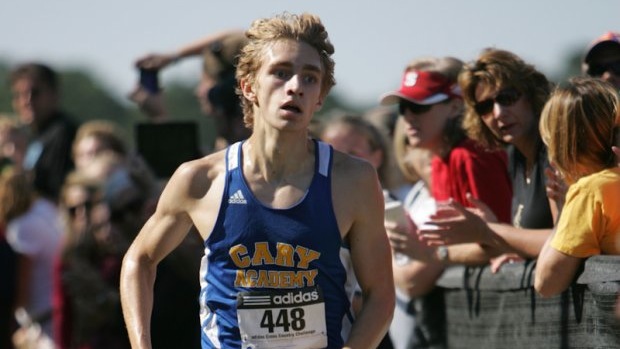 Godwin is all focus and fun out on the course. (Photo by Jospeh Bond)

Colin - Thank you; I tried to keep consistent with training over summer. As this last cross country season comes to the halfway point, the high level of competition and the fact that this is the last chance I'll have to compete in these events at the high school level are incredibly motivating.

MileSplit - You were close to 10th in the Foot Locker regional last year. Is that a goal this season?

Colin - Qualifying for Foot Locker Nationals is most definitely a goal for me. It may be something of a long shot, but competing against some of the best guys in the nation would be incredible.

Colin - During the summer before 9th grade, I got a text from a friend named Zach asking me to run cross country with him that season. I didn't think that it would be too painful so I showed up for the first day of practice. I was wrong (we started with a hard workout) but it turned out to be a lot of fun.

Colin - I'd say that my family, friends, teammates, and coaches are the people who have held the most influence over my successes as a runner. My coaches are incredibly intelligent and provide awesome training regimens; my teammates are exceptionally fun to be around while challenging me to push past my self-set limits; my friends are understanding when I have to miss social gatherings and tech rehearsals for meets or practice; and my parents are incredibly supportive of all my endeavors. If any one of those elements were lacking, than I probably wouldn't be able to race at the level I do.

Colin - Coaches Hall and Fenton coach me during cross country and track and field respectively. I can't tell you how much it means to be coached by two people who have elevated a former teammate, Thomas Graham, to the national caliber runner that he is today. It's also very impressive seeing how much they both care about every member of their team. Their willingness to sit down with any runner they coach, no matter what his or her caliber or spot on the team is, and hammer out a training plan is inspiring.

Colin - In a sense, success is just the culmination of tiny bits of training amassed over time. For me, dedication and patience have been keystone components to training effectively. Having enough patience to be dedicated enough to go out every single day, regardless of adverse conditions, and work to make yourself better is a huge part of becoming successful. I just discovered that for myself over this summer by deciding to put in the work and see what I got out of it.

Colin - Having fun as a team is hugely important to team unity. To conquer this, my teammates and I try to make practices, trips to meets, and meet days as fun as possible. For example, we've met on campus at 5:15 in the morning to go run in Umstead, gone on group runs in the rain, and worn excessively classy clothing just because we can. This transfers into training in that, during difficult workouts, we bond together and support each other as best we can. Just because it has to be painful, doesn't mean you have to go through it alone.

Colin - 2012 Adidas Wolfpack Invitational has become my favorite race so far. WakeMed is always a fun course in that its standard servings of difficulty always manage to throw a curveball. During this race, the curveball was the challenge to maintain contact with the leaders on flatter sections when I had normally found these sections to be a relaxed part of the course. Also, it's nice to know that I can surprise myself every once in a while with a good race and a big time drop.

Colin - I mostly enjoy competing against runners who try to have fun when they're out there. These are the guys you can joke with when you're on the starting line; the guys who will skip down hills during a race just because they can; and the guys that give all they have to the race. I find these guys to be some of the most motivating figures on the course.

Colin - Watching my teammate Thomas Graham compete in such national-caliber events like Footlocker Nationals and New Balance Outdoor Nationals during his high school career was immensely inspiring. A bunch of my teammates and I normally gather either at someone's house (for Footlocker or Brooks PR) or travel to the venue to support him and watch him race when he competes in such big meets. It's inspiring knowing that someone can achieve so much just by putting in the time day after day, and it's doubly so when we get to watch his hard work play out on the track or trails.

Colin - Since Wolfpack, my goals have somewhat been turned on their head. I had been shooting for running sub-15:30, but I'm now looking at trying to break 15 and/or become a Footlocker Finalist. I have yet to see how realistic those goals look, but even if they are large goals, I support Daniel Burnham in his dictum, "Make no small goals; they have no magic to stir men's blood and probably themselves will not be realized."

Colin - Currently, long-term goals involve improving as much as I can throughout the upcoming seasons. I hope to run in college, so trying to stay as consistent with my training is another goal that I think might help lead me away from injury. I also hope to keep finding different ways to make running enjoyable. When it hits the middle of the season and one is rolling from workout to workout, it becomes helpful to have little tricks one can employ - be it singing with the team on warmup, taking different loops for warmups/cooldowns, or just chilling in the stretching circle - to help you realize that practice isn't all that bad.

Colin - Retired Navy Lieutenant Brad Snyder. Snyder competed for the US as a paralympic swimmer. I think that his incredible decision to work through immense adversity and pain to gain back some quality of life after going permanently and fully blind when he was hit by an IED while on deployment is incredibly inspiring. He and countless other disabled men and women who chose to work through their difficulties and live normal lives are huge inspirations for me.

Colin - Fall. Icy rain is so much more fun than immensely powerful showers of photons.

Colin - Twister. Gotta do something with all the flexibility stretching during practice gives you.

Colin - I prefer books to both. If forced to make a choice, then facebook.

Colin - Going out with friends. The former happens way too often.

Colin - Dirt and mud provide so much more entertainment for you and your teammates than grass, especially when the course has steep, muddy hills and sharp turns.

Colin's race at the adidas Challenge, footage from about the 4k mark, where you can see what kind of lead Bakri Abushouk still had...