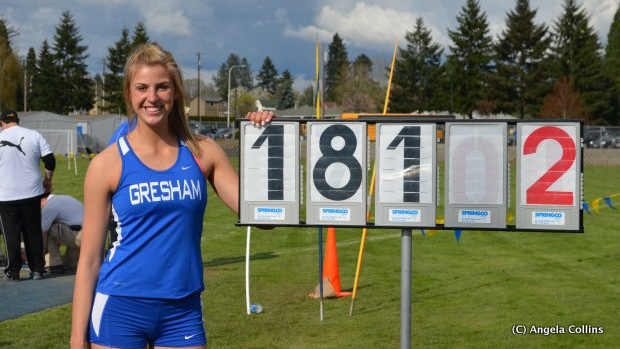 Welcome to Track Chats 2012! We continue with javelin superstar Haley Crouser from Gresham HS in Oregon.  Haley has big expectations for the 2012 outdoor season, especially with the Olympic Trials coming this summer.  Few could predict, however, that she would come out in her first meet, the Aloha Relays, and launch a HS record toss of 181-02!  Her brother, HS javelin record thrower Sam Crouser, had this to say about his sister, "I think that it is a great accomplishment for her but it is also a really good start to her season and she has a lot more to look forward to".  Sam is a sophomore at the University of Oregon.  When asked about the fact that three Crouser's hold HS records Sam remarked, "I didn't really think about that too much but it is pretty cool".  Pretty cool indeed. Sam holds the Javelin mark at 255-4 and cousin Ryan Crouser (a frosh at Texas) holds the Discus mark at 237-6.  Recently Haley won the javelin against collegiate athletes at the Oregon Relays with a throw of 164-11.

MileSplit - We knew it was going to be a good year for you but 181-2!?  What was the throw like and what were you thinking as you watched your jav launch into orbit?

Haley - The throw was amazing! I wasn't expecting to throw that far but I have had the national record as one of my goals for a while now so I'm really happy that I reached it.

MileSplit - You kind of need to rewrite your season goals now right? Where do you think this takes you as the season progresses?

Haley - My new goal is 191'. I am also competing in the Olympic Trials so I will also be trying to reach the olympic B standard as well which is around 192'.

MileSplit - With the history of your family in the sport, is there pressure to perform or a lot of support to continue to improve?

Haley - There is a lot of support from my family. Very rarely do I feel any pressure because they all know how hard it is at points to improve and they all just want us to do the best we can. It's a very positive atmosphere. However, they have a feeling of what we are capable of reaching and really push us to reach those marks.

MileSplit - What has the reaction been from your family and friends?

Haley - Everyone has been really happy for me and has always supported me through everything. The mark was pretty surprising though with getting it on my first meet!

Haley - I first tried track when I was six and absolutely hated it. Then I picked it up again when I was nine and that was when my dad and brother introduced me to the javelin. I actually ended up winning Nationals in the Junior Olympics that year and after that I was hooked!

Haley - My family is the most influential for me in track. They have all experienced so much in the sport and always support me. I really up to all of them and want to follow in their footsteps.

Haley - I love the javelin but I also really like the 100m hurdles and high jump. They are just really fun events for me and they are all fun to train for.

Haley - All of my coaches mean a lot to me. They have helped me so much over the years and I owe so much of this to them. They always try to do what's best for me and take so much time out of their lives to coach and support.

Haley - The most important thing in the training program is remaining injury free. We always try err on the side of caution and keep the 'less is more' thought in mind.

Haley - I don't have a particular meet that's my favorite but competing at U of O takes the cake for the best place to compete! The fans are amazing and the facilities are out of this world.

Haley - My favorite performance would have to be getting the national record. I have thought about it since I first started track and to finally see the work that i have put in pay off feels great.

Haley - I don't necessarily have any particular athletes that I like to compete against but its fun to go against the girls in big meets because so many of them are high-caliber athletes that it makes the competition really intense.

Haley - My greatest experience was making the team to France this last summer and getting to spend time over there. There were so many great athletes on the team and people I got to meet. The whole thing was one of the best experiences I've ever had!

Haley - I want to throw over 190'. I also want to make the World Junior's team to Barcelona this summer and hopefully have a shot at the Olympics!

Haley - To be the first high school girl in the nation to ever throw over 200'. I also want to make the 2016 Olympic team to Rio.