Photos above by Jeff Sides

When it comes to girls’ track and field, the Harvard-Westlake School is one of those teams that can often get lost in the shuffle.

The small independent college preparatory school, located in Los Angeles, has an enrollment (grades 7-12) of roughly 1,600 with slightly more than half that total comprising its high school student body.

Competing in a state as large as California where some schools number as many as 150 athletes on their programs, it can be easy to overlook what’s happening at Harvard-Westlake no matter how successful its season may be.

That would not be the case this year.

Over his 23 years as head coach and an additional three more as an assistant at his alma mater, Wolverines’ coach Jonas Koolsbergen has watched his squads produce quite a few outstanding athletes and win several individual and sectional championships. He ranks his latest bunch of 52 athletes at the top.

“Absolutely,” he said. “It’s the most accomplished season and noise that we have been able to make.”

When the season ended just a few weeks ago, Harvard-Westlake was the owner of four national titles. The school, just a 20-minute drive from Hollywood, wrote quite a script at the New Balance Nationals on June 18, winning the distance medley relay with an all-time U.S. best of 11 minutes, 22.23 seconds, a stunning nine seconds under the previous mark. Just a day earlier, the Wolverines claimed the crown in the sprint medley, running 3:55.12 – a clocking that ranks No. 14 on the all-time list. 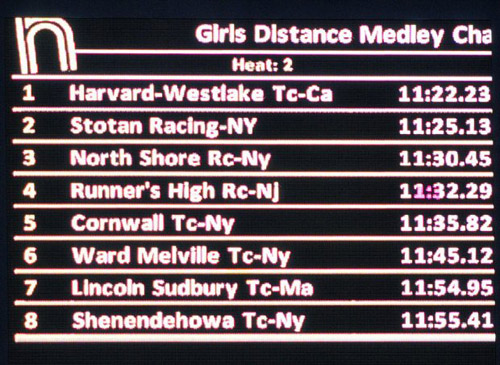 Individually, two gifted juniors from those relays – Cami Chapus and Amy Weissenbach – have turned some heads burning up the oval, also etching their names in the books. 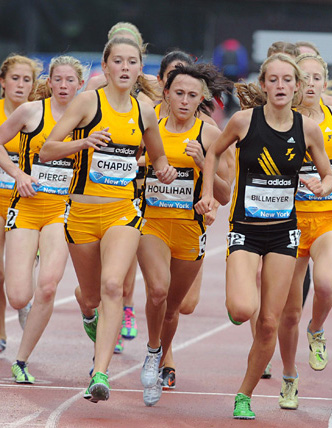 Chapus, the nation’s best miler, earned that distinction after her win at the adidas Dream Mile (photo left by Don Rich/PennTrackXC: Cami Chapus on her way to winning the adidas Dream Mile) in New York City where she posted a personal best time of 4:42.71 in the June 8 race.

Weissenbach has made her mark in a race two laps shorter, running some astonishing times for 800 meters. At the state meet, Weissenbach defended her crown in the event, sizzling to a national (National Federation of High Schools: NFHS)  record of 2:02.04, which is also #3 All-Time. The Gatorade Runner of the Year also added her own national title with a win at Nike with a time of 2:08.91.

Amazingly, Weissenbach was coming off an injury that kept her sidelined during the postseason of cross-country. She wasn’t able to start training until March.

Without the service of Weissenbach at the CIF California Cross-Country State Meet on Nov. 28, Harvard-Westlake wasn’t able to defend its Division IV team title, but it still placed a respectable fourth among the 22 schools. Chapus edged J Serra senior Kat Delaney by three seconds, covering the five-kilometer course at Woodward Park in Fresno in 17:45. Despite having just four entrants, the Wolverines also tied for third place in the statewide outdoor championships at Buchanan High in Clovis on June 3-4.

From the fall to the spring season, Harvard-Westlake has set 17 school records in distances ranging from the 200 to the 3,200.

Koolsbergen, whose squad was a ninth-place finisher at NTN, credits the Wolverines’ current success to a number of things.

“I think it’s a combination of just the right kind of extraordinary girls with a tremendous staff that has really come together and is good at what they do,” he said. “If you take the girls’ side, it’s the best year ever.”

The 46-year-old Koolsbergen, a former decathlete for UC-Santa Barbara in the late 1980s where he was a Big West conference champion, says track and field is taken seriously at the small school.

“The thing we do well is coach in a collegian fashion,” he said. “We are kind of all working together and it really is overall for the girls.”

This current season and over the last few years, Harvard-Westlake’s strength has come from its runners, especially its distance core.

“Everything goes through phases,” Koolsbergen said. “Right now, running is heavy. At different times, it’s come from our weight and field events. We pride ourselves on fielding a whole program. Right now, it’s our work in running that's helping us [be successful].”

Chapus and Weissenbach just competed overseas for Team USA in the IAAF World Youth Championships in Lille, France. Via cell phone on July 7, Chapus talked about her squads’ special season. Only two days earlier, she qualified for the finals of the 1,500

“I think this season, even though we are small, we have been strong individually,” Chapus said. “I think mainly this year our team has been very close.”

She credits the school’s knowledgeable staff as a primary reason for its success.

“I think we get a lot of good input and a lot of work goes into coming up with workouts [at Harvard-Westlake],” she said.

Harvard-Westlake’s performance in the DMR at the New Balance meet was the result of some fantastic legs by all four of its runners. It wasn’t just the Chapus-Weissenbach show.

The Wolverines went into the meet as the No. 3 seed behind New York teams Stotan Racing [Fayetteville-Manlius] and the North Shore Racing Club [North Shore], who finished 1-2 at the Penn Relay’s Championship of American DMR in April with times of 11:34.46 and 11:36.11, respectively.

The Wolverines’ seed time going into the meet came from their win at the Arcadia Invitational in April when the quartet finished with a time of 11:40.89. Harvard-Westlake also won the sprint medley at Arcadia, dipping under four minutes for the first time with a school record of 3:59.07.

Weissenbach gave her teammates an early advantage at the NB meet by scorching her 1,200-meter leg in 3:24. The junior covered the first lap in 70 seconds and ran negative splits the final two with times of 68 and 66 seconds.

“That’s flying along,” Koolsbergen said. “If anything, the first lap was too slow, but she was kind of biding her time.”

“What’s really impressive is Lauren has run some 800s for us, but she’s primarily a 400 runner,” Koolsbergen said. “The 800 is definitely on the long side for her. But she knows what she’s capable of and wanted to be part of the team.”

Chapus solidified the national mark with a 1,600 anchor of 4:45.23. The Wolverine star held off Stotan’s Courtney Chapman on the final leg.

“She was right on me,” Chapus said. “I took off and created a gap. It was hard to run alone. She caught me at 2 ½ laps, but I wasn’t worried. I knew how badly I wanted the record.”

“We clearly knew we were good and confident we’d do something special,” Koolsbergen said.  “But I have been coaching for a long time and it’s easy for more things not to come together. We still had to make it happen and to get to the race and run the race in excellent fashion and just put it together and do something we knew we could do. We knew we could get a national record and to have it happen is special.”

Chapus said that they had a little added motivation before the big race.

“[Stotan Racing] was favored to win and I think that pumped us up more,” she recalled. “I don’t think that people considered that Amy and I had improved so much. Our 400 leg [Chord] cut off three seconds from our last DMR at Arcadia. It was not just Amy and I, but KC and Joanna. I think all the sacrifices that we made [during the season] kind of supported the relay and got us ready for a record. I think after [Arcadia], we knew we could run faster.”

“I think it really showed how much our team improved and how hard we worked during the season,” she continued. “We just ran fantastic.”

“That group was also a good combination,” Koolsbergen said. “We were hopeful that we would win, we just didn’t have enough to get the national record.”

Two of a kind

It’s not often that a school has two runners that are ranked No. 1 in the country in their respective events. It’s even rarer when those two runners are juniors.

This past season has truly been a special one for Chapus and Weissenbach. Besides what they have done on the state and national level, the Wolverine duo just finished off a successful trip at the IAAF World Youth Championships in France. Chapus ran a PB of 4:22.69 in her semifinal heat of the 1,500 on July 6 to qualify for the finals. In the finals, held on July 9, she placed fifth and smashed her best by five seconds with a 4:17.12 clocking, the fastest time posted by a U.S. runner at the meet. 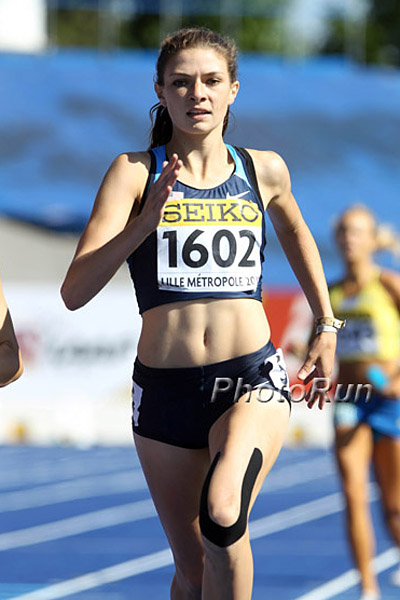 Kenya’s Faith Chepngetich Kipyegon set a meet record with a winning time of 4:09.48. On July 7, Weissenbach was third in her heat of the semifinals at 2:08.09, the eighth fastest time of the five qualifying heats. She just missed a spot on the podium three days later by taking fourth overall in the finals with a time of 2:03.59, less than a second from winner Ajee Wilson of Neptune High in New Jersey.

Chapus, the two-time defending cross-country champion and a 13th-place finisher at the Nike Cross-Country Nationals this past fall, is somewhat of a late bloomer to running. She didn’t compete seriously until she was a freshman at Harvard-Westlake.

“I actually played soccer as a youth and I still do play soccer,” she said. “In elementary school, I did soccer and softball. I did some track but I never had any practices. I just went to meets, maybe two or three.”

Weissenbach came to Harvard-Westlake in the seventh grade, suffered injury problems during the eighth grade, but showed plenty of promise by her freshman season. As a sophomore, she won the state title in the 800, running 2:07.56. She also captured the NTN by nearly three seconds with a 2:08.4 effort. She was a fourth-place finisher at the cross-country states as a tenth-grader where she cruised to a time of 18:24 for the five-kilometer distance.

Weissenbach’s current best and national mark in the 800 that she set at this year’s state meet is a mere half-second from the qualifying standard for the U.S. Olympic Trials in 2012.

“They are definitely something special,” he added. “They are both very good.”