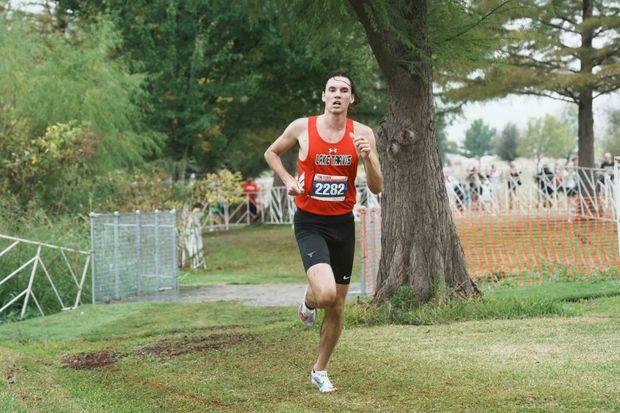 Brendan Hebert, a former University of Texas runner who competed at the Penn Relays in April and once ran at the NCAA Indoor Championships, went back to high school on Friday and illegally ran at the UIL Class 6A State Cross Country Championships, MileSplit has confirmed.

Hebert, a 2018 Lake Travis graduate, donned a red Lake Travis jersey in the race on Friday morning and finished second overall to Austin Vandegrift's Kevin Sanchez. While there are differing opinions, Sanchez said later that he believed that Hebert began the 6A race at the start line and finished the entire 3.1 mile distance.

The University Interscholastic League was unequivocal. The governing body disqualified his performance shortly after.

Afterward, when reached for comment, an official from the UIL told MileSplit that it plans to report Hebert to the police and is taking all measures possible to make sure similar events never happen again for its members in sanctioned meets.

MileSplit caught up with Hebert after the race. He had this to say:

"You do know that's not allowed, right?" we responded. "You are a college kid. You can't race in a race, correct?

"I do not race in college anymore," he said.

Hebert was named to the Academic All-Big 12 Second team in 2022. He also earned an USTFCCCA Indoor All-American recognition in 2019 for being part of a Texas DMR team that reached the NCAA Championships.

MileSplit also reached out to a source close to the University of Texas cross country and track and field community and received word that "Yes, that is 100-percent him. I have no doubt."

When reached for comment, Colin Sully, the Austin Vandegrift head coach, said the team had no idea who Hebert was.

"I know he started the race and he finished the race," said Sanchez, who won his second straight Class 6A title. "I didn't know anything about him. I didn't know who he was, probably until 10 minutes after the finish, when everyone really started talking about it.

"I'm not entirely sure what the circumstances around it were, I just know it happened and it's stupid. I don't know what will happen from here."

Despite the controversy, Sanchez said the day wasn't any less special. His Vandegrift team finished second at state.

"Honestly, in my eyes, it doesn't take anything away from it," he said. "I was talking to my coaches. They were super angry. They said, 'You don't need a pacer to win state. You did your thing.' He was being stupid in the race. I didn't know who he was. I saw him. He's stupid. I told myself, 'I'll reel him in eventually. I'll win my back to back state.' I don't know. It's a whole thing. Hopefully it won't disappoint. My team got second and we're all super happy. It's a little wacky, but we're still very happy with everything. We'll put that past us."

This comes six years after the controversy of "The Manhattan Bandit.''

Terry Varicelli, a high school student-athlete from Union City, N.J., made national news in 2016 when he illegally jumped in-and-out of high school cross country and track and field races.

Hebert posted on Instagram on Thursday, "Without struggle, there is no progress. Without pain there is no glory only the real survive in this game.

Hebert's Strava account published a 3.06 mile run in Travis County on Thursday night around 7:30 p.m., but after speaking with MileSplit made all of his run data private. Hebert did post on his Instagram account the day before the Texas 6A championships, "last workout today before this weekends (sic) race and excited would be an understatement." Following the race on Friday and his subsequent his involvement in it, Hebert has changed several social media profiles in the time since.

He has set his Strava account to private, save for a few posts and has changed his Instagram handle to @_.bh.1_, per an accounting of his social media.