GREENSBORO, N.C. -- As national champions were crowned this morning in the 3K at the AAU Junior Olympic Games, we were able to witness one of the most exhilarating face-offs of the day.

The California kid is a familiar face to the AAU crowd, as he has earned four gold medals between the 800m and 1,500m distances since 2019.

On Monday, Jaimez-Solorio faced off against Patricio Pardo (Bethesda, Md.), an athlete whom he beat year ago in the 1,500m.

The battle was fiercer this time.

Only this time it was double the distance. 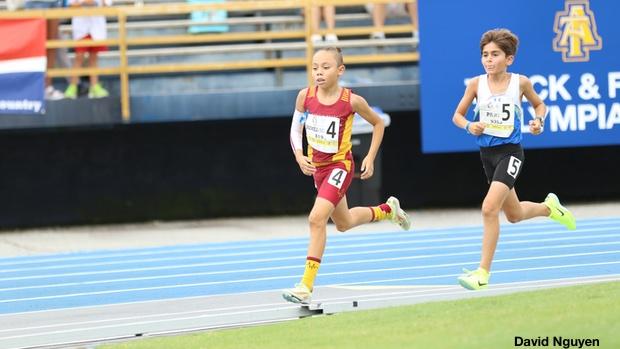 From the start, Jaimez-Solorio took it out strong and led the first 1,400m. But Pardo was right there on his heels.

Over the next few laps, Jaimez-Solorio and Pardo took turns leading each other as they separated themselves from the rest of the pack.

Then Pardo made a bold move with 600m left to go to put him in the lead. Jaimez-Solorio dug deep and Pardo unlocked another gear.

The Bethesda, Maryland-native crossed the finish with his first gold medal. along with a new 3K national record time of 9:48.26. The previous record stood for 19 years at 9:55.22.

Everything You Need To Know About The AAU Jr. Olympic Games