* On Wednesday, Natalie Cook was announced as Gatorade's National Runner of the Year

The fall of 2021 was certainly a good one for Natalie Cook.

And on Wednesday, she was awarded one of the country's highest honors.

Cook was awarded Gatorade's National Cross Country Player of the Year award, honoring the country's top performer in the sport over the given season.

Cook is the first female athlete from Texas to win the national cross county award, and only the fourth athlete to be named from the state across either the cross country or track and field recognitions.

She was surprised in front of family and friends on Wednesday at Flower Mound High School.

The award itself, however, wasn't surprising.

No athlete has ever won the coveted national double. In an odd year, Cook became the first.

With no national championship set for Portland, Oregon, in December, the Garmin RunningLane Cross Country Championships became the de facto team championship, and all Cook proceeded to do there was record the second-fastest 5K time in high school history, registering a time of 16:03.93.

But she wasn't finished. The very next week, Cook traveled to the Eastbay Cross Country Championships -- the newly re-titled series formerly known as Foot Locker -- and won again, pushing through a tough course en route to the win in 17:15.00.

She was undoubtedly the top distance runner of 2021.

But Cook's opener, in many ways, was the beginning of her coming-out party in 2021. Interestingly enough, it was her only loss of the season.

The Flower Mound senior was one of four girls under 16 minutes for three miles, registering a finish just 13 seconds behind eventual winner Dalia Frias (15:43.50) and two seconds shy of runner-up Samantha McDonnell of Newbury Park.

But from there, Cook would finish the year unblemished. Those moments, however, were precursors for 'Championship Cook.'

She scorched the fast course at Old Settler's Park in Round Rock, Texas, at the UIL State Championships, crossing the line in a new U.S. No. 1 time of 16:32.40, nearly a full minute ahead of the runner-up Aubrey O'Connell of Prosper.

By the end of the two-day event, however, she was the only girls athlete under 16 minutes.

Cook followed at the Eastbay South Regional, dominating at McApline Course in Charlotte, North Carolina, in a time of 16:38.05.

In total, Cook finished the year with three efforts under 16:40 for 5K. Only four girls athletes in the country even went under 16:40 once over the campaign.

Her season-best of 16:03.93 at the Garmin RunningLane Cross Country Championships gave her the second-best time in high school history. Gatorade National Cross Country Player Of The Year Winners Since 2007 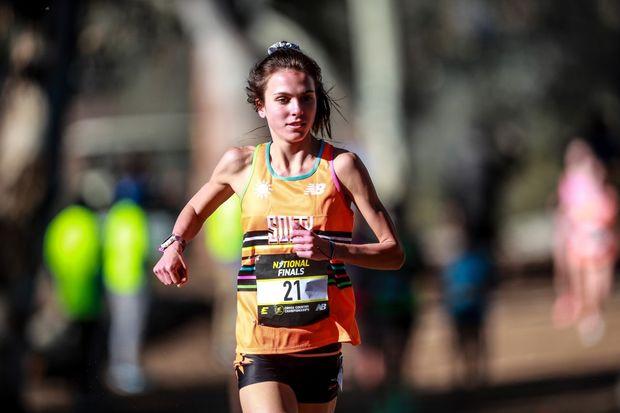