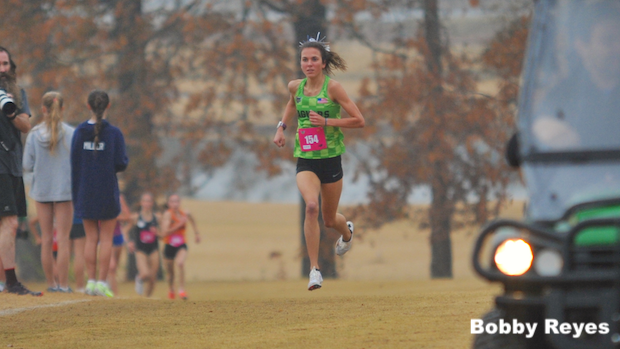 HUNTSVILLE, ALABAMA -- It may have taken an entire cross country season to come to this conclusion, a revealing of the nation's best girls distance runner, but perhaps on Saturday we finally saw that question get answered.

Midway through the Garmin RunningLane Cross Country Championships at John Hunt Park, Flower Mound's Natalie Cook broke away from the pack and didn't look back.

The MileSplit50 No. 3 ranked Texan utilized strong work on the hills and then ramped up her turnover on the flat and downhill sections as she ultimately pulled away from a contingent that included three nationally-ranked runners, winning the national championship in a new U.S. No. 1 time of 16:03.93, which also becomes the second-fastest individual performance ever recorded in high school girls cross country.

"I just had to keep pushing," Cook said. "I heard my dad keep saying, 'They're right there.' He always likes to say that to keep push me. So I like having more motivation to keep pushing. Sometimes I get lost. I get stuck and stay in a rhythm."

Cook now only trails Jenna Hutchins, who broke 16 minutes on this very course and ran 15:58 to win the debut RunningLane National Cross Country Championships in 2020.

When asked to describe how she felt during the race, Cook simply said she was zoned in. But for not the reason you may expect.

The performances on Saturday were among the best in high school history, with 20 girls going under the elusive 17-minute barrier and 129 girls under 18 minutes. And on that end, it was one of the most impressive displays of team racing over the season.

The MileSplit No. 3 ranked Niwot girls finished within the first 75 places amid their scoring five and all seven were under 18 minutes, compiling a 17:22 average.

"It's amazing. The crowd, it just pushes you to the finish." -- Natalie Cook

The Cougars scored 112 points, fighting off a high-flying Buchanan team, which rebounded in the later miles with stellar finishes en route to 140 points. Arapahoe, the Colorado Class 4A champion, was third with 213 points and York was fourth with 214. Cherry Creek finished in fifth with 237 points.

The field included 15 of the nation's top 25 teams and just under 300 athletes. Athletes from nearly every state comprised the field.

As the team points were being decided in the mid-pack, though, the individual race was heating up.

Cook, Stewart and Cridge, along with Dalia Frias and Jenna Mulhern, all separated from the pack near the two-mile mark. But it was Cook who began to extend her lead over the lead pack through the undulating course in the second mile.

"Natalie kind of went on that back hill," Stewart said. "I was like, 'Man, we're moving!' And so I was just like, I tried to hold it all the way through the line, stay comfortable and stay fast."

Cridge got somewhat close, separating from Stewart and Mulhern late.

The Indiana-based athlete was ecstatic with the performance. Only weeks earlier, she had contemplated shutting down her season after a hard race at the Team Midwest Regional.

"I'm just so grateful because I actually, after the [Team Midwest Region] I was actually not planning on doing this race," she said. "Two weeks out, I was like, you know what, my legs feel good. Might as well. I have more. I'm hungry for more.

"I decided and I'm so so so grateful I made the decision to race."

Near the finish, Cook began to leg out and show the turnover that made her one of the nation's fastest runners this fall.

"It's amazing," said Cook, who is coached by her father Andrew. "The crowd, it just pushes you to the finish."

Just hours later, Cook and her team jumped back into the car and made the nearly two-hour drive north to Nashville, where the team would fly back to Texas.

A job completed, Cook would set her sights on the Eastbay Cross Country Championships on Dec. 11, perhaps gaining another opportunity to win her second national title.