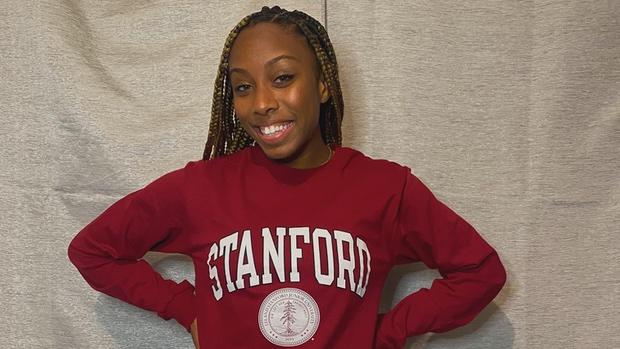 Lynchburg Heritage's (VA) Alaysia Oakes, ranked the No. 39 recruit in the Class of 2022 by MileSplit, signed her National Letter of Intent to join Stanford University in 2022, adding herself to the Cardinal's already strong recruiting class. She was ranked US No. 39 in the long jump and US No. 22 in the triple jump, respectively, to close out the outdoor season.

* At the VHSL Indoor State Championships, Oakes won the 55m title in a personal best of 7.27

Over the last three years, she's earned 10 individual VHSL state titles. Six of those state titles came from her junior season in the 55m, 100m, long jump and triple jump.

During her junior year, Oakes had several top finishes at AAU Indoor Nationals. She had the fifth-best triple jump of 38-4 while she jumped 17-3 in the long jump for 14th.

Later in the summer, Oakes continued to excel as she finished sixth in the long jump and 15th in the triple jump at the AAU Junior Olympic Games. She enters her final indoor season as the No. 2 long and No. 1 triple jumper in the state of Virginia.