Analysis: St. Francis Mountain View looks on paper to be the strongest team in California based on team scores. They dominated the Division 2 CIF State Cross Country Championships last year scoring 57 points. This year the Lancers will be returning all but their top guy, Shyam Kumar from the 2017 state championship team. They have a strong 1-5 average 5K time of 15:37.20 based of off 2017 season's best times and a 1-5 split of only 22.70-seconds look for them to be up there with the best teams in California throughout the year. 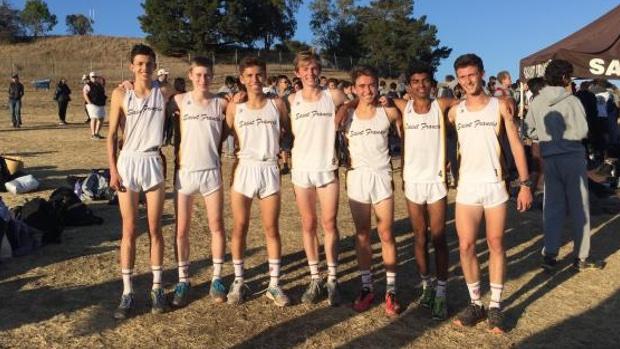 St. Francis Mountain View head coach Philip Pompei answered some questions for us about his team and the upcoming season.

How long have you been a Coach? How many of those years have been at your current school?
I started coaching in 2012 and have only coached at Saint Francis, my alma mater.
What is your meet schedule this fall?
Earlybird Invitational - 9/15
Stanford Invitational - 9/29
Clovis Invitational - 10/6
West Catholic Athletic League Meets on 10/2, 10/15, and 10/31
CCS Championships - 11/10
California State Championships - 11/24
NXN (Pending Qualification) - 12/1
How has summer training gone for your team? What do you focus on during the summer months?
The summer has gone really well. We have a great group of returning Varsity guys rounding into form at the right time as we prepare to begin our racing season, and another group of young guys eager to make a meaningful contribution to the squad this season. We focus on increasing our aerobic strength through lots of miles in the hills.
Which athletes do you see as the probable top five this season?
Colton Colonna
Eric Eng
Juan Pablo Garcia
Daniel Skahill
Aiden Maddison
Mason Elefant
Euan Cairns (Our top 5 will likely come from this group of 7, but it's a little too early to predict).
Who are your team captains or leaders and what stands out about them as examples for the rest of their teammates?
We have a great group of senior leaders including Colton, Eric, Daniel, and Mason (among others). They are all team-first, service-oriented guys, who want nothing but the best for their teammates. They are some of the most disciplined and compelled young men I've ever met and it's an absolute joy to watch them inspire, encourage, and support each other and the rest of the squad.
Who are some new faces who will make an impact on your team this year (i.e. freshmen, transfers, runners who have improved a lot)?
I hope that this is a long list, but one guy in particular who I will lift up is junior, Euan Cairns. He missed all of last cross country season due to injury but performed really well on the track last spring in the middle distances. He has had a great summer and will certainly be one to watch this fall.
What are some staple workouts your team does during the season?
We love our early season hill repeats and tempo runs to confirm and then enhance our aerobic strength.
What will be the biggest reason why your team is successful this season?
We have a lot of guys who know what it takes to be successful in the championship season.
What will be the biggest obstacle or challenge facing your team this season?
We had a pretty outstanding front-runner last season, who we knew we could count on for a low stick in just about every race we ran. His consistency will be tough to match up front, but we have a number of guys who will be battling at the front of races this fall to help keep that team score as low as possible.
How would you describe your team's culture?
It's a brotherhood. Everybody plays a vital role so everybody gets to celebrate when things go well and everybody is held accountable when we need to make a change. They are just as excited when a teammate runs a PR as when they do.
What are your top three goals for the team this fall?
Every year I hope that each guy walks away from the season knowing they are loved, feeling like they belong to a very special community, and having accomplished something they formerly thought to be impossible.
25 - 24 - 23 - 22 - 21 - 20 - 19 - 18 - 17 - 16 - 15
14 - 13 - 12 - 11 - 10 - 9 - 8 - 7 - 6 - 5 - 4 - 3 - 2 - 1
Tweets by milesplit