Northern (PA) High School junior Marlee Starliper had a breakthrough season in 2017 that included a 13th-place finish at Foot Locker Nationals and a number of course records in Pennsylvania, though expectations are now higher for one of the top prospects of the Class of 2020. In Pennsylvania, she's coming off a season where she swept district and state championship honors in Class AA while also posting the nation's fifth fastest time with an effort of 16:50. Starliper proceeded to win another state title in the 3200m this spring and competed in her first USA Junior Championships at the 5K distance in June. Don't miss the Pennsylvania star compete in 2018, but in the meantime check out her summer training blog.
Week 1 l Week 2 l Week 3 l Week 4 l Week 5

Today was the first day of preseason, so I'm back to running with my team at the school. Practice was in the evening, so I did some upper body resistance training earlier in the day. Today was still a long run, but I had to run by myself because no one else was going as far. I started out on the same route that everyone else was doing, but then added the extra distance by piecing together sections from other runs into an extended loop. Keeping in mind the workout planned for tomorrow, I kept this run consistent and averaged out 7:07 per mile. When I got back to the school, I did strides.

We were going to run today's workout on our cross country course, but all the rain from the past few weeks put it in bad conditions, so we had to do it on the track instead. After a two mile warmup, I put on a pair of cross country flats. I was planning on just wearing my trainers, but I wanted my feet to feel a little more fast. While the rest of the team was running the 3200m as a time trial, my coach just wanted me to practice running around the same pace I would run during cross country races. I started off with one of the guys from the boys team and felt pretty good going through the mile in 5:28. Then the excitement of finally being able to practice at race pace kicked in-after of training runs kicked in-so I picked it up a bit for the second mile. I finished strong, but not in a sprint, running a 10:41. I was pleased with how it went because I was able to practice the pace I wanted to run for XC races on tired legs. Afterwards, I ran a 3 mile cool down.

"You know who accidentally set her alarm wrong and didn't wake up in time for practice? ME!"

Dang, my calfs are tight! Obviously, I expected it after wearing the XC flats yesterday. Today I ran easy with the guys team. It was a fun change to have them set the pace and be able to talk and joke around with them! I still would consider this an easy run, but it was hilly. There was a big, long hill which really got the legs burning. In the evening, I did core work and about a half an hour of upper body weightlifting. 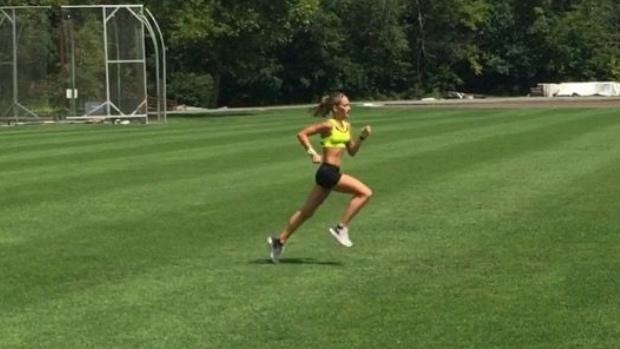 You know who accidentally set her alarm wrong and didn't wake up in time for practice? ME! (I was upset and felt so bad!!) Because of that incident, I ran by myself around my house. My calfs don't yet have all the soreness worked out of them, and my legs still feel pretty tired after a hard three days. Also, another workout is planned after I was shuffling along for 5 miles! Afterward, I stretched out with some yoga, and by the time I was done my legs once again felt great!

I was excited for this workout, because I've missed running fast! I did a two-mile warm up, then went to the track to start the workout. During XC season, this is pretty much the only time I ever do a workout on the track. Also, I don't do intervals this early, but this workout is an exception because each workout that's planned for preseason has been a tradition for years. Since we were on the track, I wanted to take the opportunity to practice a slightly faster race pace, around 5:20. My first 1200m was 4:07, and since it's a continuous workout, after crossing the line I jogged off the track and ran on the recovery loop until I arrived back at the track to immediately start the next repeat.

My second repeat was 4:00. At this point, I was really happy with how good I felt. The faster pace felt natural to run. My coach wanted each repeat to be faster than the last by a few seconds, so I let myself push a bit more in the last 1200m, running a 3:51. I was very happy with how this workout went, because I felt relaxed throughout, my legs felt great, and I had a lot of fun with it! I ran a mile and a half for my cool down and later in the day I did a series of plyometric exercises.

"I had NO IDEA what I was getting into for this trail run."

I'm going to describe the setting of this run: My teammates and I are running in single file up a small mountain, running on a 'trail' that can barely be followed and that which is covered with A TON of rocks. We are being led by one of the boys (the only one who knows the way) who is carrying a can of orange spray paint to mark the path for the other teammates behind us.

The trail is so technical that there are many sections where we have no choice but to nearly walk, and we are 'running' about 11 minutes for each mile. I had NO IDEA what I was getting into for this trail run. We met up at a nearby campground, and I probably wouldn't have gone if I knew how dangerous the trail was, but I'm very thankful that I didn't twist an ankle or anything.

However, it still was a fun run, because we were all laughing at how awful the trail was and celebrating if we hit a sub-11 minute mile. It sure was an experience...but thankfully we were only on it for 4 miles. Afterward, I added another mile and a half with a few other guys on some safe dirt roads. After I did strides, I joined my team in celebrating our survival of today's adventure through the woods by having a donut. (One of the perks of having two teammates who work at Dunkin' Donuts is that they will occasionally bring 5 boxes of donuts to practice.) When I got home, I did dynamic stretching and hip strengthening exercises.

Due to having plans for the rest of the day on Saturday, I didn't have time to swim. But I still really wanted to get in my swim for the week, so instead of having a complete day off, I did a swim workout. Afterward, I rolled out to get my muscles feeling refreshed!

Reflection: This was a really fun week of training, and I enjoyed being with the team for this first week of preseason! Other than some soreness early in the week, I physically felt very good throughout, and I am really excited for one more week of preseason where I get to enjoy doing a few more workouts! Having the opportunity to practice running race pace is making me SO excited to race again...I can hardly wait!!