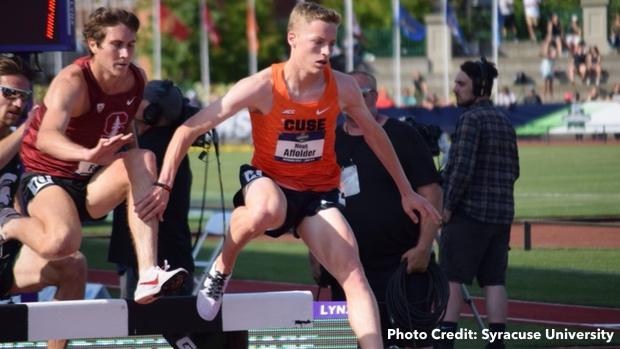 The following Q&A is part of a new MileSplit series where top track and field athletes reflect on their transition from high school to the NCAA.

As a kid growing up in a military family, Noah Affolder bounced around from state-to-state with one constant: His passion for track and field.

Even with significant injuries his sophomore and senior years of high school, Affolder developed into one of the top recruits in the nation. His pedigree to boot: Two appearances at Foot Locker Nationals, a runner-up finish at the 2017 New Balance Nationals Indoor 2-mile, titles at the 2017 Millrose Games and Great Edinburgh XC, plus prep PBs of 4:07 for the mile, 8:46 for two miles and 14:18 for 5K.

Related Links: Brie Oakley On Her First Year In College

But the steeplechase is the event in which Affolder made his mark right away in the collegiate ranks as a freshman for Syracuse University. He shook off a tough cross country season to win the ACC title in the steeplechase and qualify for the NCAA Outdoor Track & Field Championships, where he clocked a PB of 8:40 and placed ninth in the final, earning second team All-American honors.

What's one thing you wish someone had told you a year ago, when you were entering Syracuse as a freshman?

I wish someone had told me that no matter how good you thought you were in high school, everyone in college and on your team has the same accolades as you. Going into college, I thought I was different than anyone else because I've done x, y and z but everyone on the team has done that stuff. It's an honor to be on this team.

How long did it take you to figure that out?

Probably all cross country season. All fall. It took awhile. I was coming back from an injury and it was rough, mentally, to accept that there were guys who maybe I would have stomped on in high school who, because they had been in college for a year longer than me, they had experience and training I didn't have.

What was your injury? How long did it take to recover?

I was injured last spring so I didn't run outdoor track my senior year. I had pretty bad tendonitis on my legs around my ankles. So my first cross country race was at Wisco and I'm not sure that's the greatest meet to open up as a freshman when you've been injured for six months. But looking back, I'm glad I opened up there.

I never had my stomach turn in a workout before.

The starting line was like a quarter mile long and it felt like a sprint. Usually in high school, I would be able to sprint and be at the front, but at Wisco, I was sprinting and was in 50th to 100th place. I came through 5K like 10 seconds off my high school 5K PR with two miles to go, which is pretty mind-boggling. I never really felt like I found a groove within that race, I don't even know my place-like 200 something. Close to dead last. [Editor's Note: Affolder placed 217th at Wisconsin in 26:05]. My second race was the conference meet and I ran poorly there as well [66th place, 24:52 for 8K].

Did you think about redshirting?

I thought I might redshirt but I hoped I would race. No one wants to just train, that's boring. I didn't expect it to go as poorly as it did but looking back on it, I'm glad I didn't redshirt so I now I can use my bad experiences to teach some of the incoming freshman.

What did you do to take your mind off running when things weren't going well?

I joined the Fellowship of Christian Athletes group on campus and that really helped give me something outside of running to be committed to and go to every week. I met some people that weren't on my team at the program. Besides that, finding kids to study with. And it was nice having recruits come in, it made some of those weekends a little more fun because you got to go do fun things with them.

Really proud of you for squaring up with the big boys today! Big fall ahead of us pic.twitter.com/9okACgMPuE

What was the hardest thing off the track about transitioning to college?

Probably the dorm life. Not having any control over how loud people around you are. I'm pretty strict on what time I go to bed and most people are still having coffee at the time I'm going to sleep. And just trying to get quality sleep on the terrible beds. I kind of just got to the point where I told people in the hallways to keep it down, I'm trying to go to bed. They understood the things that I'm trying to do might be a little different than a normal student.

Can you describe the transition from high school running to training at Syracuse?

It was a lot smarter. The easy days, you felt like you could have run that pace in middle school but then you would just crush it on hard days.

I never had my stomach turn in a workout before. Tully or Sweet Road, you come back from that and your stomach's not okay for a whole day. When we went up Sweet Road the first time, I thought the warm-up was the workout. The other guys were like, 'no, we have 15 more minutes of warm-up.' 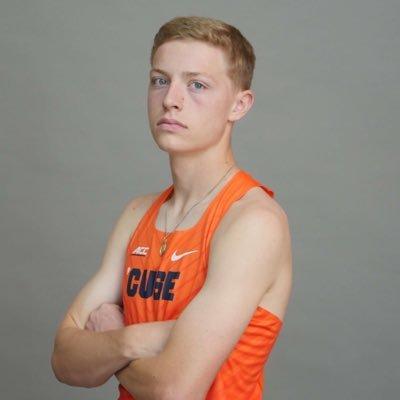 Sweet Road is probably a 10 to 15 minute drive from campus. It's basically six miles long and you gain 2,000 feet of elevation. It's just a grind the entire time and we'll do anything from a fartlek to just a tempo the entire way. If we're going up Sweet Road, you know you're gonna be hurting on the van ride back. When we go there, we say, 'this is where we get good.' You always want to go. Cross country, we'll go at most four or five times. In track, that's more where we would do our long runs. Throughout the entire year, we'd go up no more than eight times.

How did you handle the transition to track after a disappointing cross country season?

I started off my indoor season pretty well. I opened up with a mile in Boston and PRed by four or five seconds [4:02.46] but then at conference, I ran like 3:18 for the 1200m on the DMR-which is something I could have done as a freshman in high school or an eighth grader. It was a really terrible way to end my indoor season.

I'm not comparing myself to Justyn because if you're comparing yourself to Justyn, you're always gonna fall short. But he taught me a lot about how to win and how to realize that times will follow with winning and with getting in the big races because you've won another race.

Going into outdoor, I started seeing a sports psychologist once a week and talking things out with her. I tried to figure out ways with her to make sure, in the days leading up to competition, that my mind was in the right spot and if anything was troubling me, learn how to stay focused on what I need to do. One of my coaches is a big fan of pick-up basketball and so am I and he said just every race to have the mentality that you're going to play pick-up basketball. You're not stressed out too much but when you're in the game, you're really into it, but after it's over, the result doesn't matter that much.

Did you see yourself as a steeplechaser when you entered college?

I had no clue. It's something I hoped they would let me do but I was expecting to run the 5K. I didn't show up for the first day of steeple practice. I really enjoyed it in high school and would love to go to the Olympics in it, but I just wanted to focus on what the coaches wanted me to do.

My assistant coach asked me to jump over a few barriers and he's like, 'hey, you have pretty good form.' After practice, he called Coach Fox over and said, 'hey, watch this, he's pretty good.' I messed up and went over with the wrong leg and it was high and it was so ugly! Coach Fox is like, 'hold up, you think this form is good?'

I shook off the nerves a little bit and went over again and then they decided to throw me in a race at Bucknell. My last race was my indoor ACC meet and they wanted to put me in a meet that didn't draw too much attention to myself if I blew up. They weren't gonna take me to Stanford and I honestly would have run terribly at Stanford because I didn't have any confidence at that point.

I kind of just got to the point where I told people in the hallways to keep it down, I'm trying to go to bed.

I ran like 8:51 at Bucknell and blew away everyone's expectations. I wasn't expecting myself to run that fast, either, I was just hoping to run faster than I did in high school. I think I PRed in every single race besides the finals at nationals. Coach Fox told me after nationals, 'at the beginning of the season, we weren't even thinking of taking you to Stanford and now you're second team All-American.

I want to take a crack at the 5k a few more times but I definitely see a future in the steeple with Aidan [Tooker] and I, and hopefully some other guys.

I did steeple in high school, just my junior year, because I was injured senior year and sophomore year. There weren't many meets that had it so I ran it three or four times in high school total. I remember my junior year I ran the same steeple time that Aidan had run in high school and I saw what he did his freshman year at Syracuse [2nd at ACCs, 22nd at NCAAs, 8:39 PB]. He set the bar kind of high for me.

What was the highlight of your year?

Winning ACCs in the steeplechase, that was really cool. Also being able to run the 5K in my last race with Justyn [Knight]. That was an experience I'll never forget. We basically put our XC team on the line at the conference meet; that was awesome.

No one touching this group.

32 points in the 5k pic.twitter.com/quOYZQudbr

What did you learn from the upperclassmen on the team?

Justyn kind of had a rough fall to his freshman year as well. I'm not comparing myself to Justyn because if you're comparing yourself to Justyn, you're always gonna fall short. But he taught me a lot about how to win and how to realize that times will follow with winning and with getting in the big races because you've won another race. Indoors, I was all about running certain times and he taught me to just race, which was really key.

Other seniors taught me to just relax, not be so uptight about every single thing and it's okay to maybe have a chocolate chip cookie or something after a race. I was always so uptight about that and then to see them chowing down on cookies and go run well, that showed me it's not something you need do all the time but you can do it and still run well.