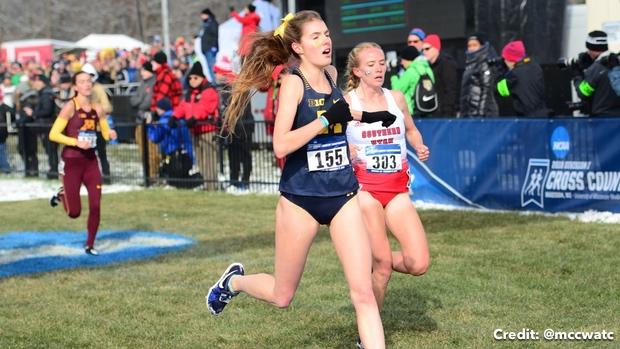 Low iron and ferritin levels may have derailed Anne Forsyth's final year of cross country at Ann Arbor Pioneer High School in 2017, but that struggle didn't continue in a University of Michigan uniform.

The Wolverines freshman was a standout performer for the team's NCAA Division I Championship podium finish (4th-place) this fall.

But before that, a breakout junior year of high school saw Forsyth place fifth at Foot Locker Nationals and 14th at Nike Cross Nationals. The following spring, she won the Michigan state title in the 1600m with a new PR of 4:43.84 and was the New Balance Nationals runner-up in the mile behind only Katelyn Tuohy.

As a senior, she had flashes of greatness--like running 10:08 to win the Michigan state title in the 3200m--but didn't make it back to nationals and placed just 16th at the state cross country meet.

Forsyth says now that components of the female athlete triad (also known as RED-S, relative energy deficiency in sport) at times derailed her training in high school. But with proper nutrition and training plans, the Ann Arbor native has come into her own as a freshman for the University of Michigan, where both of her parents ran and her dad, Ian, won a national title in the DMR in 1995.

In just three races this cross country season, Forsyth killed it with consistency--finishing eighth at the Big Ten Championships, third in the Great Lakes Region and 46th at the NCAA DI XC Championships, just six spots out of All-American honors as the top true freshman from the United States.

After NCAAs, she booked herself a trip to the IAAF World Junior XC Championships by placing second at the Canadian Junior XC Nationals. We caught up with the dual citizen for some insight on her outstanding freshman campaign.

How was Canadian XC nationals?

It went good, I got second and I qualified for the world junior team so I'll be racing in Denmark in March. I'm really excited. This is the first year I really considered [racing] it. After the season, I figured I would try. It's my last year in the age category, so it's the last chance to do it.

Why did you decide to represent Canada?

I raced at track nationals a couple years ago and racing where my dad raced and making teams like he did, it's really really cool and it's... a different way to express [part of myself] through running. It's unique and it's fun. [My dad] was born in Nova Scotia but grew up in London, Ontario. He made World University Games and the senior cross country world team.

Did you always know you'd be a runner?

I think so, [my dad] raced after college when I was growing up. I would go to races with him and see him and I'd do the little kid races. I knew I would be exposed to it but didn't know I would love it so much.

Middle school was the first time I was on a team and more competitive racing was in high school. I played club soccer for five years and then it just got too busy.

Why did you decide to go to Michigan?

I've known Coach Mike for a long time because he coached my mom. Knowing that everyone who goes there gets better and that it's a great program and tradition... I don't think there was a point when I knew I was gonna go there, I just always planned on it. There was no question.

This summer I was mainly on my own. I didn't run very high mileage in high school so I spent the summer trying to increase that. I got up to 40ish miles per week and then I actually came down a little bit for the season. We did more intense workouts and so the harder days were a lot longer and the other days are really recovery.

What was the hardest thing about adjusting to college training?

I found it was a lot more volume of working out. I was used to everything being, not all out but kind of, just pushing yourself super hard every single rep. Here, it's a lot more running with the pack and maintaining a hard effort for a longer time, which has been really helpful for cross country. A huge difference is having teammates all around at practice. The whole group is so tight.

Was there any talk of potentially redshirting your freshman year?

I wasn't sure what I was gonna do. I ran into some medical stuff in general early in the season and it got to a point where I was running and we had to decide [whether to race] Big Tens [because] you can't redshirt after that. It ended up working out really well. [Anne was Michigan's No. 2 runner in eighth place as the Wolverines won the Big Ten conference title].

What kind of medical issues were you having?

Energy availability stuff and female athlete triad stuff that you don't really think about in high school that does impact you. There's so many resources [at Michigan]. It just wasn't something I was aware of until I got there. I knew about the ferritin levels and stuff in high school but here, it's so specific and [staff] is really really helpful.

"I was used to everything being, not all out but kind of, just pushing yourself super hard every single rep. Here, it's a lot more running with the pack and maintaining a hard effort for a longer time, which has been really helpful for cross country. A huge difference is having teammates all around at practice. The whole group is so tight."

What was it like to have your first college race at the Big Ten Championships?

That was crazy, I couldn't believe I was even gonna race. The whole thing was really surreal. We had on these big yellow bows so I could see my teammates all around but it was so crowded. Eventually, I got up with Avery [Evenson] and it was really nice to have a teammate to run with and push each other to the end. I didn't really know what to expect going in because there's so many people and I'm not familiar with who everybody is yet.

What about regionals and nationals?

Regionals, I feel like, there, we kind of talked about just racing better and holding back a little bit. I knew the last kilometer was where I fell off at Big Tens. I think regionals was my best race of the year in terms of being contained and composed the whole time.

I think nationals was just a little bit overwhelming. I was disappointed but it wasn't bad. I think the biggest thing there was it showed how strong our team is. Not everyone had their best day but someone else stepped up and ran a huge season best and we placed fourth. It was really crowded and I spent a lot of energy trying to get to the front and then couldn't stay there.

What did you learn from that experience at nationals?

Maybe just don't panic as much. If I'm not super high up in the beginning, don't be too focused on what girls are around me, just move up more gradually throughout the race.

What was the team's reaction to making the podium?

It was crazy, we were so happy. We sort of knew we could do it but we weren't favored to do it. We knew if we focused and didn't get too caught up in it, it would happen.

What are your goals for track season?

Last year, you were just 16th in the state for cross country. What were you going through and why didn't you try to make it back to Foot Locker or NXN?

Last year, I just felt a little off the whole season and then found out my ferritin and iron levels were really, really low. I just decided to stop and take a rest and I think it affected my confidence but luckily, that's definitely resolved now.

Were you thinking about last season at all in your races this year?

No, I think training with the team so much I wasn't really nervous. I wasn't thinking about that. It feels like a long time ago.

What has the academic transition to college been like for you?

It's definitely harder but there's a lot of extra time and resources to get my work done. I'm only taking 12 credits right now, so the work is harder than high school but I don't have as many classes to go to. I'm undeclared but I want to major in elementary education. Cognitive science was my favorite class, I really like the professor.

Do you live with teammates? How is dorm life?

All the freshman are in the same area of the dorms, but next year, I'll live in a house with teammates. They're really, really nice, the food is really, really good, there's lots of good spots to study, so it hasn't been a hard transition.

I'm from Ann Arbor--a mile away--and that wasn't part of my decision [to go to Michigan] but I definitely think it's nice. I have a lot of younger siblings [three younger sisters and a younger brother], so it's nice to see them.

This interview has been edited and condensed for clarity. 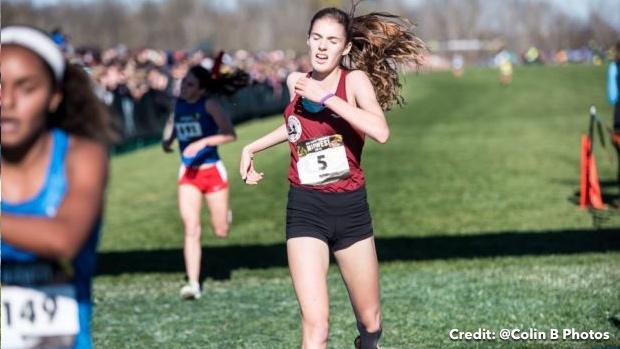